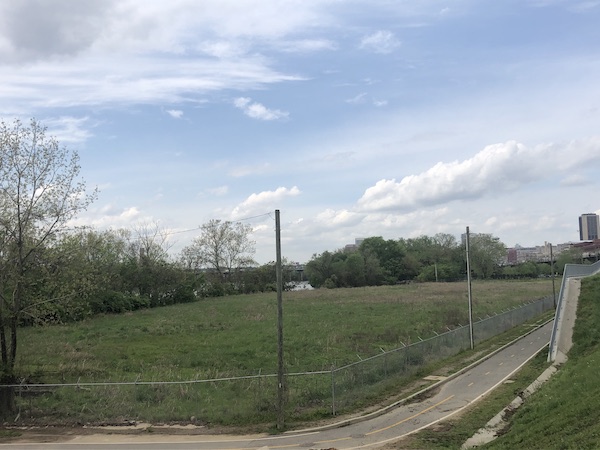 The city will add to its riverfront real estate holdings with the help of a local conservation nonprofit.

The Capital Region Land Conservancy announced Thursday that it is under contract to purchase the undeveloped 5.2-acre parcel at 3011 and 3021 Dock St., which it would put under a conservation easement that would preclude it from future development. Once that is finalized, CRLC will gift the land back to the city.

Parker Agelasto, CRLC’s executive and a former city councilman, was joined by Mayor Levar Stoney and others at the site on Thursday to announce the pending deal.

The Virginia Capital Trail will also be a beneficiary. Stoney said the trail will be able to reroute a section that’s currently separated by jersey barriers along Dock Street through the land and into Great Shiplock Park.

“(The deal) includes a 350-foot dock that will provide deep water access to the James River for recreational activities,” Stoney added.

Agelasto said CRLC’s contract on the land disallows him from disclosing the purchase price, but  they are scheduled to close on it in August. The city is not being asked to contribute money to the acquisition.

The two parcels have been owned by Chantilly-based The USP Cos. since 2005, when it bought them for $5.25 million, city records show. The city most recently assessed the parcels at a combined $4.15 million.

After closing on the land and removing the chain link fence surrounding it, Agelasto said CRLC will begin the process of putting it into a conservation easement, a process he estimates will take up to a year. 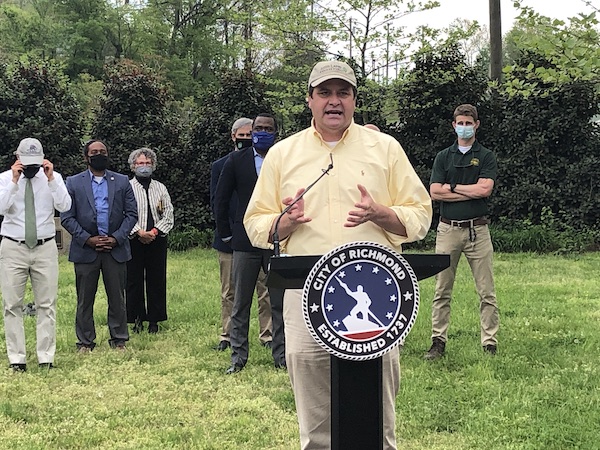 Parker Agelasto, CRLC’s executive and a former city councilman, was joined by Mayor Levar Stoney and others at the site on Thursday to announce the pending deal.

“We’ll hold it during the period it takes to complete the conservation easement and complete the public engagement,” Agelasto said. “Once that is done we’ll transfer the land to the city.”

Stoney said once in the city’s hands, the land would become part of the James River Park System.

Agelasto said that CRLC has been having discussions about what other types of programming might be done on parts of the land, but said any future uses would all be for public purposes.

CRLC has been busy of late. Last fall it completed a conservation easement of 49 acres a few miles east of the Dock Street property, just off of Osborne Turnpike in Henrico. In January it completed another easement in Henrico, that one on 123 acres of farmland on Kingsland, Hoke Brady, and Varina roads.

CRLC was also recently gifted 13 acres of wooded land along Grindall Creek near Warwick Road in the Southside. Agelasto said they’re also exploring a possible future easement along Hull Street in the city.

CRLC is a nonprofit that works to conserve natural resources, particularly land and water, in Central Virginia. The nonprofit has eased over 12,000 acres of land since its founding in 2005.

Agelasto said it gets its funding from both private donations and through grants. In addition to protecting land from future development, easements also allow landowners to retain their property while municipalities, land trusts and other third parties like CRLC “hold” the easement and act as stewards of the land.

Under certain parameters, easements can be deductible from federal, state and estate taxes.

What an impressive and generous gesture. I do not know the names of the people who funded this, but thank you for helping preserve the view from Libbie Hill Park.