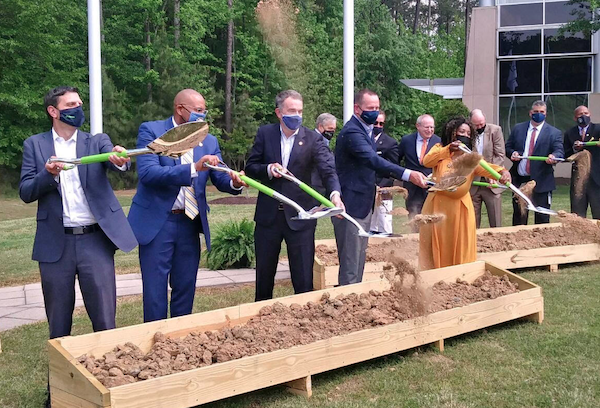 The pieces of a Petersburg pharmaceuticals hub continue to fall into place.

AMPAC Fine Chemicals plans to invest $25 million and hire about 150 more employees at its Petersburg facility on North Normandy Drive to increase the pharmaceutical ingredient production capability of the plant.

The project is spurred in part by a federal government-funded venture with AMPAC, Richmond-based Phlow Corp., nonprofit drug maker Civica Inc. and VCU’s Medicines for All Institute to shore up the supply of U.S.-made generic drugs, vials, syringes and other injectable medicines.

Phlow secured a $354 million contract from the U.S. Biomedical Advanced Research and Development Authority toward the effort last year.

The AMPAC project, which was announced in a ground breaking ceremony Tuesday, will allow the Petersburg facility to produce a wider range of pharmaceutical ingredients and more ingredients at a time than it is currently able. The facility currently produces ingredients for 30 to 50 medications annually. AMPAC expects to have its increased capabilities in 12 to 18 months.

The expansion project is expected to create 156 new jobs at the AMPAC facility. The company, which is a subsidiary of SK Pharmteco, currently has about 110 employees at the plant. AMPAC also has facilities in Texas and California.

AMPAC’s plant was previously operated by German firm Boehringer Ingelheim until the company shuttered the site in 2014. AMPAC reopened the plant in 2019.

“We’re very proud of what we’ve done over the last few years. But this partnership is really going to kick it to the next level,” AMPAC President Jeff Butler said. “We’re investing $25 million to $30 million over the coming period to continue to grow the capabilities of the site.”

Gov. Ralph Northam approved a $640,000 grant from the Commonwealth’s Opportunity Fund and a $250,000 Virginia Investment Performance Grant for the project.

Petersburg Mayor Sam Parham, U.S. Rep. Abigail Spanberger, state Sen. Joe Morrissey, Del. Lashrecse Aird and Phlow co-founders Eric Edwards and Frank Gupton, who is CEO of Medicines for All and chairman of the chemical and life science engineering department at VCU, were among those who made remarks.

Phlow is based in downtown Richmond, and the company has plans for a warehouse at the budding Petersburg hub as well.

In March, Phlow announced a partnership between it and children’s hospitals in which Phlow would develop medicines geared toward children and sell those drugs to the partnered hospitals under a purchasing agreement.

The group works together to figure out which medicines should be prioritized for production, such as injectable medicines and drugs used to treat rare diseases and pediatric cancers.

Edwards said several more hospitals have been added to the roster, but declined to identify them Tuesday. The hospitals are working on a list of needed medications, and Phlow plans to manufacture the medications through a third-party contractor this year, though eventually that work wouldn’t be outsourced.

In an interview prior to the Petersburg announcement, Edwards said there’s a persistent shortage of medicines for children in the United States. Since children need specific formulations of medicines, and they’re a smaller segment of the population compared to adults, there’s less financial incentive to make medicine catered to them.

“If you’re a pharmaceutical manufacturer, you’re choosing the drug that has the highest volume for the highest number of patients,” he said.

Shortages can mean that hospitals either spend a long time trying to find a specific medicine, or go the route of buying and then altering drugs made for adults to be safe for kids to use.

“They’re trying to manage a system that doesn’t work for them,” Edwards said.

The partnership program is designed to be more enticing to hospitals because drug prices would be more predictable and easier to budget for.

Edwards said there are nominal shared costs between Phlow and the hospitals to operate the group but declined to share specifics.

Re: groundbreaking ceremonies: Just when I thought these shallow (pun intended) displays of “achievement” by politicians could get any sillier . . .

I like how they put the dirt in those bins so the grass didn’t get messy.

Yes, sometimes you will see politicians showing up to take credit for something that happened IN SPITE of their lack of business friendliness — happens all the time in NYS, which is why most of the big things tend to be “Public private partnerships” with the money coming from the taxpayer and it going “Businessmen” who are big donors to the Democratic party.

STILL, this is a good thing, that Trump started — us producing pharma precursors here again instead of relying on China.