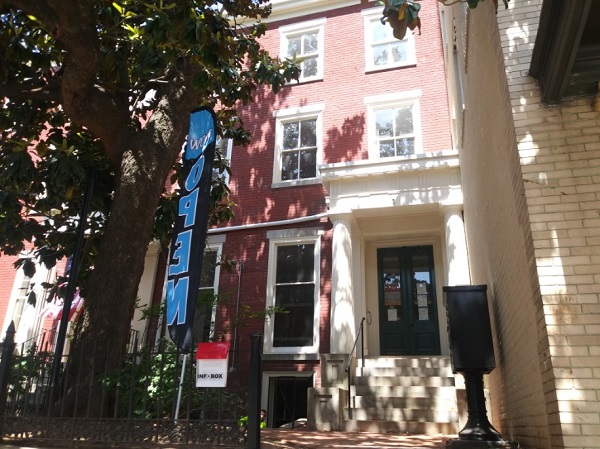 This mid-19th century rowhome at 114 E. Franklin St. in the Linden Row block is being converted into 11 studio and one-bedroom apartments. (Jonathan Spiers photos)

After years in the shadow of Linden Row Inn, the last of the original Linden Row homes not included in the hotel is getting ready to be reintroduced to society.

Douglas Development is finishing up an apartment conversion of the house at 114 E. Franklin St., the easternmost of the mid-19th century rowhomes that make up the historic Linden Row block.

The $1.7 million project brings back to life the only remaining Linden Row home that wasn’t converted to what’s now Linden Row Inn, which encompasses the seven homes closer to First Street. 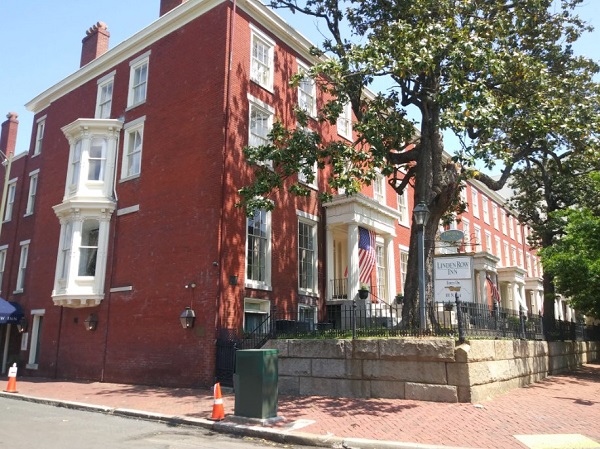 The seven homes closer to First Street make up Linden Row Inn, which started as a hotel in the late 1980s.

Two other homes that made up the original row of 10 were demolished 100 years ago to make way for the adjacent Medical Arts Building, which now houses the Linden Tower Apartments at Franklin and Second streets.

Squeezed between that seven-story building and the hotel, the house at 114 E. Franklin had been dormant for years, with its entrance chained off with a “Private property” sign attached. Douglas purchased it in a 2008 auction for just over $456,000. In recent months, the chain was removed as construction for the project got underway.

The three-story, roughly 8,000-square-foot house with an English basement now holds 11 studio and one-bedroom apartments, ranging in size from 380 to 765 square feet. Monthly rents start at $1,350 for the studios and $1,675 for the one-bedrooms.

It’s named The Edgar at Linden Row to pay homage to the writer Edgar Allan Poe, who was known to play on the property as a child when it was a garden filled with linden trees, before the rowhomes were built.

Each apartment also is named in reference to the writer or his works, with names such as “The Poe,” “The Helen” and “The Raven.” The apartments’ logo also includes an image of a raven, referencing the writer’s perhaps best-known poem. 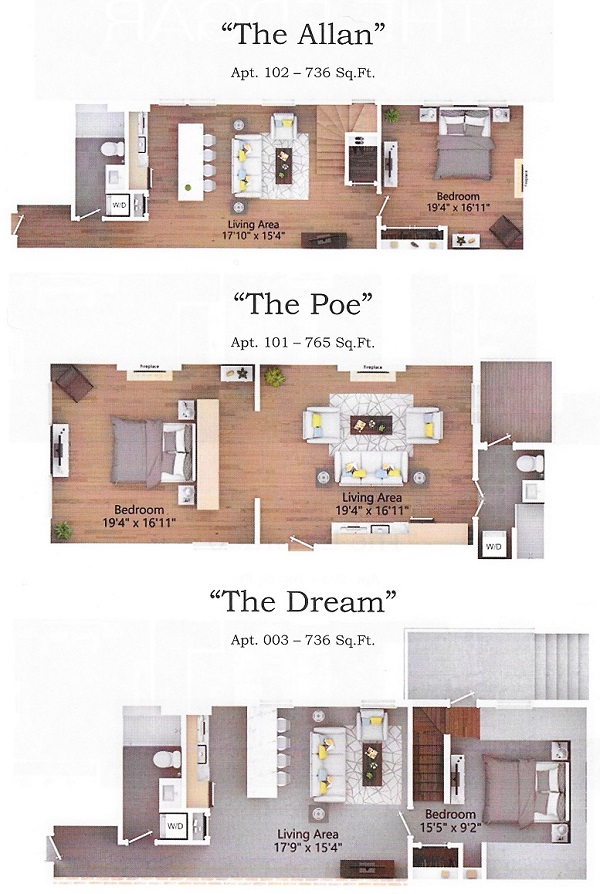 Floorplans of some of the apartments, which bear names referencing Edgar Allan Poe and his works. (Courtesy of Douglas Development)

Cindy King, asset manager for Douglas’s Richmond office, said the D.C.-based firm considered several approaches to the property prior to moving forward with the project.

“We looked at a couple different options for this location. It’s kind of unique,” King said.

Douglas worked with contractor L.F. Jennings on the rehab, which was designed by Richmond-based Architecture Design Office. ADO’s Todd Dykshorn said the building was in good shape compared to other historic rehabs he’s worked on around town.

“A lot of the interior character was in place, in the front rooms at least, which are the most significant,” Dykshorn said. “We were pretty excited when we started just by the extent of the historic material that was in there.”

He said a previous renovation from 20 years ago or so had left the building’s rear wing gutted on all but one of the floors. His approach was to match those areas to the home’s front rooms, restoring plaster walls and ceilings and matching the home’s heart pine floors. The rooms’ trim work and ceiling medallions also provided a guide.

“That type of structure, typically the back wing wasn’t that formal anyway, but materially we just wanted it to have that same character of the era of the stuff that the front has,” he said.

He said the building’s old windows, while not original, were in good enough shape to be restored rather than refurbished. He said the staircase, front parlor rooms and portico were likewise in good condition. 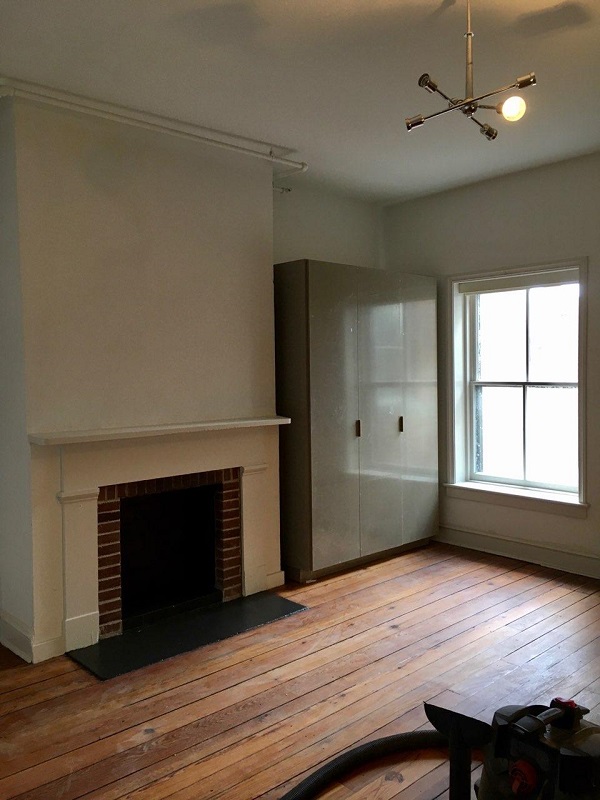 An interior of one of the apartments, which feature the home’s heart pine floors. (Courtesy of Douglas Development)

The challenge, Dykshorn said, was fitting 11 apartments into what had once been a single-family, albeit sizable, residence. He said a strategy was to orient them around the home’s windows with views of the trees in front of the building.

“We just approached it to get the most out of the materials and the historic character that were in place in setting up these smaller units,” he said.

Built in the mid-1800s, Linden Row is listed on state and national historic registers and is recognized as one of the country’s greatest remaining rows of Greek revival architecture. When the two easternmost homes were razed in the early 1920s, the remaining homes were saved by Mary Wingfield Scott, a local architectural historian and preservationist.

King said leasing for The Edgar is getting underway, with a website set to launch and Drucker + Falk handling leasing. She said they’ve started giving hard-hat tours and are preparing to start move-ins next month.

“It’s only 11 apartment homes, so we feel like they’re going to go very quickly,” King said.

Rents for The Edgar include access to amenities at the nearby Deco at CNB, the apartments in the former Central National Bank building that Douglas rehabbed several years ago. Amenities there include a fitness center and yoga studio, clubroom, business lounge with WiFi, and pool tables.

The Edgar is one of several rehabs that Douglas has underway in Richmond these days.

The company owns several other properties downtown, including a stretch of buildings in the area of Broad and North Second streets. King said the firm, which keeps a local office in the building it owns at 701 E. Franklin St., is evaluating those properties and its other holdings in town.

“We’re committed to Richmond, and we have some other things in the pipeline,” she said.