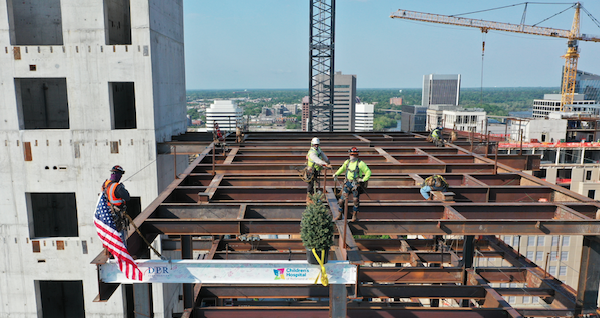 The Children’s Hospital of Richmond at VCU reached a milestone this week on the construction of its 500,000-square-foot expansion at 1001 E. Marshall St.

It held a topping out ceremony Wednesday to commemorate the placement of the final steel beam atop the 16-story structure.

That’s up from initial cost estimates of $350 million when the project was announced in 2019. The price tag rose to add operating rooms, amenities and imaging facilities.

Inpatient pediatrics programs currently located in VCU Health’s Main Hospital at 1250 E. Marshall St. will be moved into the tower. The tower project includes an above-street bridge connection to the Main Hospital.

More than 500 people are expected to work in the new tower.

DPR Construction is the contractor on the project. HKS Architects designed it. JLL is the project manager.

“(This facility is) a place where passion and purpose will come together every day to improve the lives of children from our communities and beyond. For some that will mean care closer to home  and for others it will mean a visit to Richmond for a care team and facility that’s worth the drive or flight,” hospital CEO Elias Neujahr said in remarks delivered remotely for the event.

The Children’s Hospital Foundation has been fundraising through its Built for Kids capital campaign to cover $100 million of the cost of the new facility. It’s about halfway to its goal. The other $300 million comes by way of VCU Health’s revenues and reserves.