Bon Secours broke ground Thursday on an upcoming $30 million freestanding emergency center in Chester, which will be its fourth such facility in the Richmond market.

The one-story, 24,000-square-foot building will rise at 12021 Richmond Highway and house an 11-bed emergency department as well as an imaging center. It’s slated to open in summer 2022 and will provide 24-hour, hospital-level care and services.

Bon Secours said the new center aims to fill a gap in its territory between facilities in Midlothian and Petersburg.

“A lot of our care has traditionally been in the hospital setting. But, as we advance in healthcare, we’re moving a lot of that care to the ambulatory or outpatient setting,” Bon Secours Richmond Market President Faraaz Yousuf said during a groundbreaking event Thursday. “This will fill the gap for available services within this area.”

Cincinnati-based GBBN Architects is the project architect and Kjellstrom & Lee Construction is the contractor. Heapy will handle mechanical and electrical engineering. Schaefer and Timmons Group will take on structural engineering and civil engineering, respectively.

The 6-acre parcel that will be the site of the center is owned by Project Care Northeast LLC, an LLC tied to Mercy Health. Bon Secours merged with Mercy Health in 2018. The LLC bought the land for $1.95 million in March 2021, according to Chesterfield County property records.

The facility is dubbed for now The Bon Secours Chester Emergency Center, a stopgap moniker until the medical facility’s name is formalized. Bon Secours plans to hire several dozen new employees to staff the center. 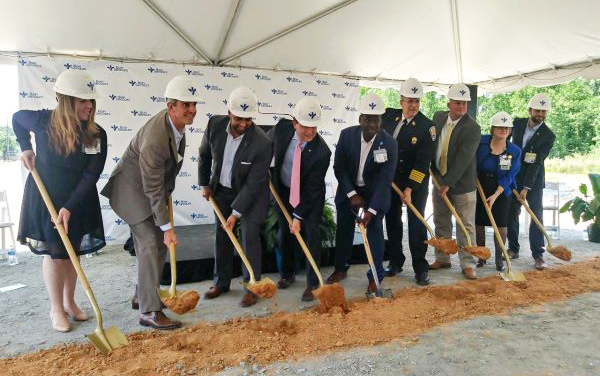 The center will provide walk-in and emergency medical services. It also will have the ability to offer CT, ultrasound, MRI and radiography for scheduled outpatient and emergency patients as well as occupational health services.

The project has been a few years in the making as a response to population growth trends, especially the growth of older residents.

The area’s segment of the 65-and-up crowd is expected to grow 50 percent from 2015 to 2025, Bon Secours St. Francis Medical Center President Joe Wilkins said at the ceremony.

The facility will operate as an extension of the Bon Secours St. Francis Medical Center in Midlothian.

The upcoming center will be the fourth freestanding emergency center that Bon Secours operates in the region, adding to outposts in Short Pump, Midlothian, and Petersburg.

Much needed on this side of town. It will be a great option for those who can’t get to St. Francis or Chippenham ER quickly.

Bon Secours, through its recent purchase of Southside Regional Medical Center, has a full hospital in the city of Petersburg. The emergency room freestanding site is in the city of Colonial Heights.