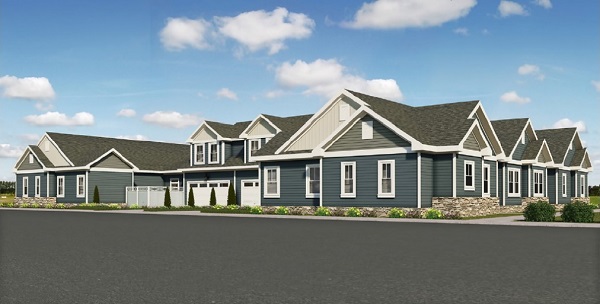 More rooftops for the region’s aging population are slated to rise in a part of Chesterfield that’s become a 55-and-up housing hotspot.

County supervisors last week approved a rezoning for Villas at Swift Creek, a 194-unit age-restricted development planned for 50 acres east of the intersection of Otterdale and Woolridge roads.

Manakin-Sabot’s Boone Homes is behind the development, which will consist of attached townhomes and quad homes for homebuyers aged 55 and up.

Boone President Mitchell Bode said he’d been eyeing the site, between Fox Creek and Magnolia Green, for several years. Promoted in March after joining Boone in 2019, Bode previously worked for StyleCraft Homes of VA, which built Greenwich Walk at Fox Creek, a 55-and-up section of the massive development by TerraForge Communities.

“I’ve looked at that property for years thinking it would be a great site for an active adult community, to go along with what’s been happening in that corridor with Greenwich Walk and some other communities of that nature that are finishing up at this point,” Bode said. 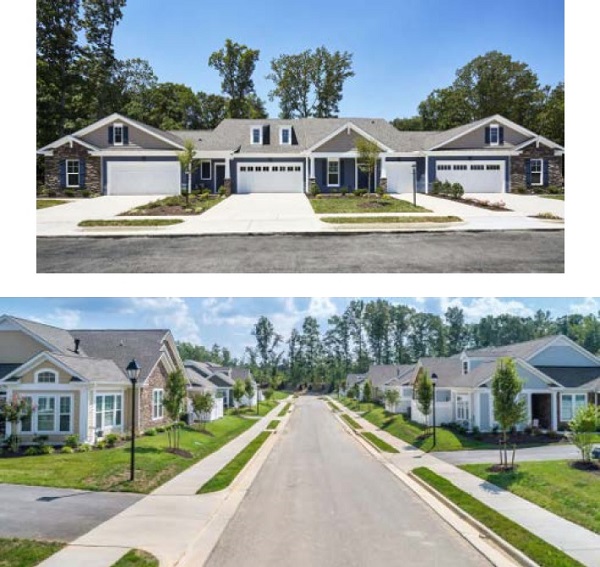 Sample elevations of the types of townhomes and quads envisioned for Villas at Swift Creek.

“There’s a demand for that type of product, and I think bringing the Boone component to it will add some value and it’ll be a little bit different for that western Chesterfield market.”

Homes at Villas at Swift Creek will be 1½ stories and range from 1,500 to 2,500 square feet in size. Bode said floorplans are in the design phase, with no set number of bedrooms or bathrooms. Price points for the homes, which will be in a condominium ownership structure, also have yet to be set.

In addition to building the homes, Boone is developing the site, which consists of a large undeveloped parcel and six smaller ones, most of which include existing homes with different owners. Bode said Boone has all of the parcels under contract.

The latest county assessment valued the parcels at $1.35 million collectively. Bode said a development cost for the project has not been determined.

About 16 acres of the site is to be used as a recreation area, with amenities including a park, a dog park, walking trails and ponds for stormwater retention. An existing cemetery would remain on site, and a clubhouse also is planned. 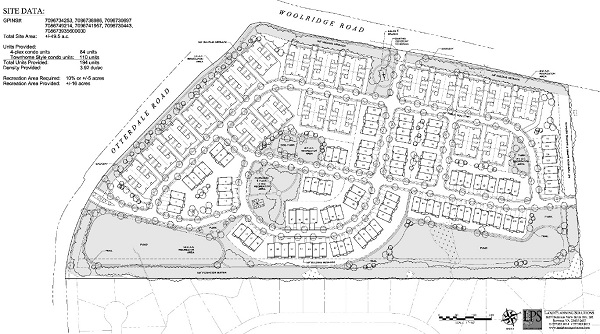 A site plan for the project, turned clockwise so north is pointing to the right.

Youngblood, Tyler & Associates is the engineer on the project, and HG Design is the landscape architect. Land Planning Solutions, an engineering firm in Virginia Beach, also is involved. Hirschler attorney Jeff Geiger represented Boone in its rezoning application.

Based in Goochland, Boone is a custom builder that has frequently ranked in the top 10 of the Home Building Association of Richmond’s annual list of top builders based on sales and unit volume. The firm has built homes in Goochland’s Kinloch community, Tarrington on the James in Chesterfield, and Bacova in Henrico.

With Villas at Swift Creek, Boone joins other builders that are targeting the 55-and-up market in Chesterfield’s Moseley area.

Nearby, at Cosby Hill High School, Main Street Homes is planning hundreds of age-restricted townhomes as part of its Oasis Park development to the east of the school. The Midlothian-based builder also is behind Cosby Village, a 68-acre development adjacent to Greenwich Walk.