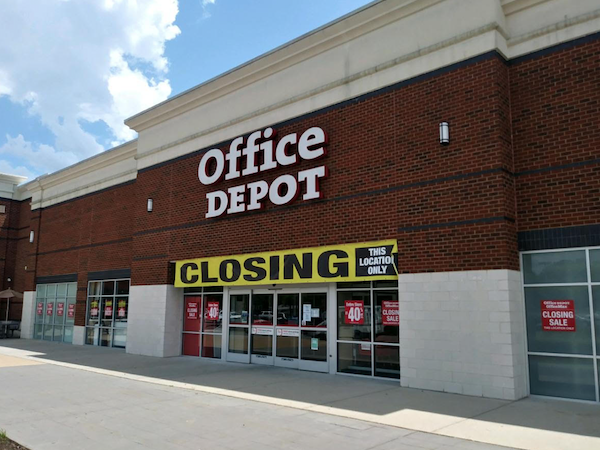 Office Depot plans to permanently close its store at the Shops at Stratford Hills in August. (Jack Jacobs photo)

An office supplies retailer is applying a dab of Wite-Out to its city presence.

Office Depot is scheduled to permanently close its store at the Shops at Stratford Hills shopping center Aug. 21, a company spokeswoman said in an email Thursday. It’s the chain’s only location within the city limits.

The spokeswoman didn’t respond to a question about why the location is closing.

There are a total of three Office Depot and seven OfficeMax locations in the Richmond region, according to an online store locator. Both chains are owned by Florida-based parent company The ODP Corp.

Office Depot’s Stratford Hills space is at 7101-A Forest Hill Ave., which is next to the shopping center’s Publix. The store occupies about 18,000 square feet, according to city property records.

The owner of the shopping center is Harper Associates, which developed the center in the early 2000s and has plans to expand it with new construction that would be home to a Chipotle and townhomes.

Frankly, I’m amazed they hung on this long- which is true of many of their stores. They maintain significant square footage to post such paltry sales results. Overall, it’s just a tough shopping center to do business in; I fear they won’t be the last to shutter operations in the near future.

Agreed, this store is always a ghost town, and I’m surprised it’s still open. You can find most of the office basics elsewhere at lower prices or online. Sad to see this go, especially in this shopping center. The Target at the other end of the center is going strong.

I am really bummed out by this. I work from home down the road from this place and during the pandemic, I relied on it for office and sanitizing supplies.

Great group of people work here and I hope someone hires them really quick.

I wish them all the best and thank them for the help the last 2 years.

The print dept. gentlemen at this store are phenomenal to work with. Matt has especially been the bomb.com and all of my clients and colleagues enjoy his great work. Hope this staff is relocated.