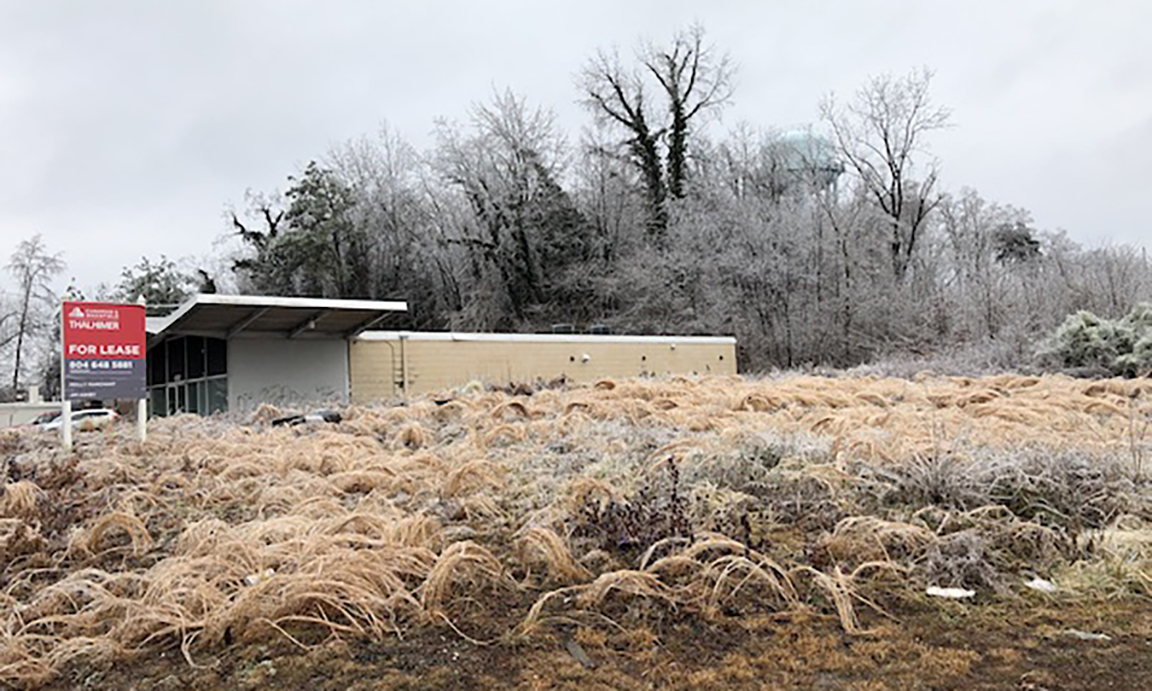 A mostly-wooded site along Forest Hill Avenue is being proposed for dozens of townhomes. (Mike Platania photos)

A local developer is preparing to kick off a pair of Southside projects: one that includes adding a new retail strip and a residential element around a Forest Hill shopping center and the other for a dialysis center just over the Lee Bridge.

Harper Associates is planning an expansion of the Shops at Stratford Hills, a retail center the company developed in the early 2000s.

Plans call for a new retail building to be occupied in part by Chipotle, and, if approved by the city, 36 townhomes on a roughly 3-acre plot next door at 6935 Forest Hill Ave.

Most of the land eyed for the townhomes is currently wooded, and the former Lock Stock & Barrel Tattoo building that sits on the site would be razed to make way for a new 6,500-square-foot, drive-thru-ready outparcel.

A rendering of the Chipotle-occupied building that would replace the old tattoo shop on the site. (Courtesy of Thalhimer)

A Chipotle spokesperson confirmed that the Tex-Mex chain would occupy about half of the new building.

In order to move forward with the expansion, Harper is seeking to revise the conditional use permit it was granted from the city when initially developing the center. Its application was filed with the city last month.

Preston Lloyd, an attorney with Williams Mullen representing Harper in the process, said that the original plans for the Shops at Stratford Hills included a possible future expansion.

“More recently, the plans for this area evolved to reflect a fundamental rethinking of the typical suburban retail shopping center,” Lloyd said of the introduction of for-sale residential and new restaurants to complement the existing center.

Lloyd said they’re looking to have the CUP amendment go before the city by the fall, with eyes on a spring 2022 groundbreaking.

The townhomes would be built by Ryan Homes. Commercial leasing on the retail outparcel is being handled by Thalhimer’s Reilly Marchant and Jim Ashby.

In the meantime, Harper is planning to meet with community stakeholders regarding the project.

“We are in the preliminary stages of coordinating these conversations,” Lloyd said. 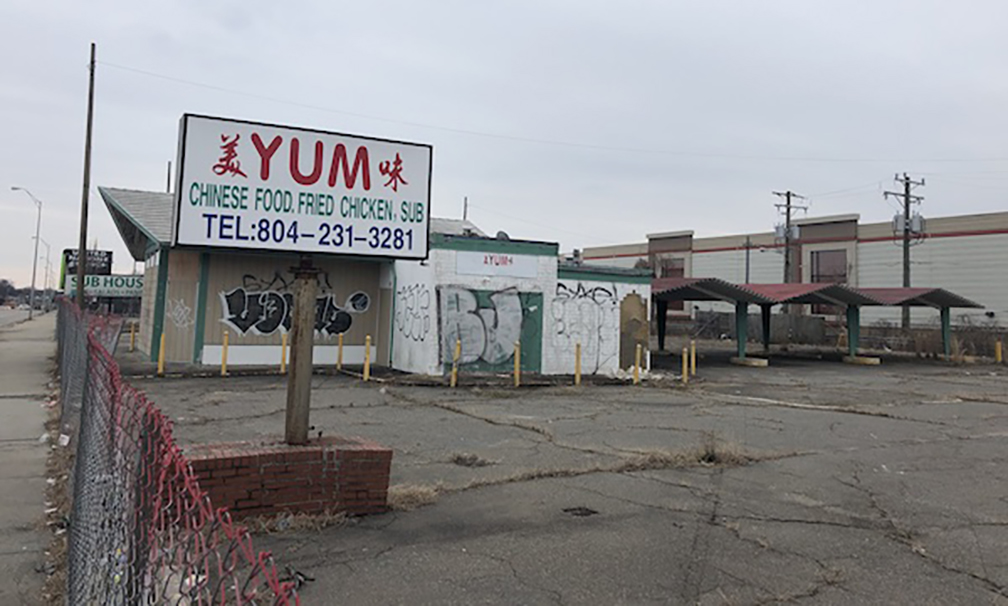 A former Chinese restaurant is being razed to make way for a dialysis center on Cowardin Avenue.

About five miles to the east, Harper recently struck a deal to pave the way for a Fresenius Kidney Care dialysis center at 406 Cowardin Ave., near the intersection with Semmes Avenue.

Harper bought the 0.6-acre site on Feb. 8 for $925,000. It was formerly home to Yum Chinese restaurant but has been vacant in recent years. Wawa had previously pondered a location on the site in 2018.

Harper will develop the center for Fresenius, which already has five locations in the Richmond region, including a newly built office across from Scott’s Addition.

Work on the 6,500-square-foot building is set to begin this summer, with a targeted completion in spring 2022.

Lloyd said Harper was drawn to acquiring the parcel in part because of its proximity to Belle Heights, a multi-phase townhome project the developer is working on around the corner at 1802 Semmes Ave.

Will Allen, Harper’s asset manager, said 26 of Belle Heights’ initial phase of 111 townhomes have already sold, with prices starting at $340,000.

Harper also has found itself in the thick of the city’s coveted casino development race. Harper owns 47 acres at 1220 and 1260 Ingram Ave., where Wind Creek Hospitality hopes to build a $541 million casino and resort.

Wind Creek was one of six respondents to the city’s RFP.

The Stratford Hills project seems like a great idea.

Although it is humble and not in good repair, I will be sad to see the tattoo parlor building demolished. It is a great example of mid-century-modern architecture.

Very true. Add that it is a dialysis center being built next to storage and the dreams of improved and better retail options in Manchester are drying up.
﻿

Agreed. As someone who has lived in nearby Woodland Heights since the early 80s it’s disappointing. There are empty strip malls all over town that a dialysis center could go into.

With all due respect, how do you reach that conclusion? The placement of a dialysis center at 406 Cowardin Ave. does not in any way preclude retail development from entering the Manchester market. If you are looking for some kind of drive-up strip-mall type of retail (akin to that in Stratford Hills) to be built in Manchester, I don’t think you will ever see that going forward… THANKFULLY!! Given Manchester’s trajectory — when viewed through the neighborhood’s development over the last 5-to-10 years, current projects underway, proposed/planned/being developed or on drawing boards, the entire character of Manchester has changed, is… Read more »

I’m constantly amazed and thrilled by what’s going on in Manchester, and anyone who remembers the Manchester of 20 to 40 years ago probably would be too. I do hope there will be more home ownership opportunities in the neighborhood going forward. Up until now the focus has largely been on building rentals.

I love the architecture of that building! It’s a shame it can’t be repurposed.