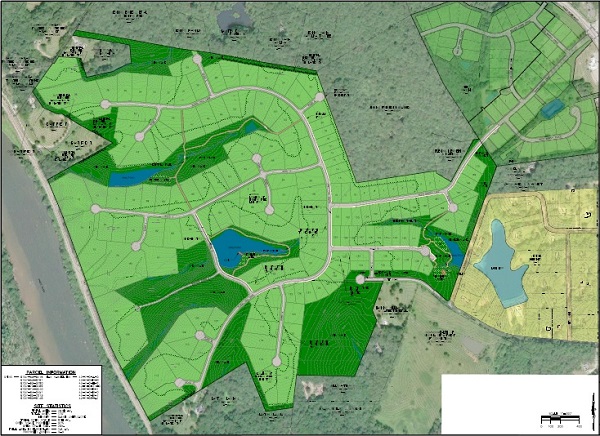 The 170 home lots would fill the bulk of the 265-acre site between the river and the Reed Marsh subdivision, visible at upper right. (Courtesy Youngblood, Tyler & Associates)

The development of one subdivision at a prominent Goochland crossroads has led the way — literally — to another planned residential project about three times as large.

County supervisors this week approved zoning for Rural Hill on the James, a 170-home development on 265 acres between the river and Reed Marsh – the 64-home subdivision taking shape at the intersection of River Road West and Sandy Hook Road, across from the county government complex.

Where Reed Marsh will consist of half-acre lots with homes starting in the mid-$500,000s, Rural Hill’s home lots will average 1 acre in size, with some riverside lots as large as 5 acres. Most homes in Rural Hill will range from $650,000 to $850,000, while the riverside homes could reach as high as $2 million, developer Kyle Yeatman said.

The pair formed a development company, Yellowstone Communities LLC, in mid-2020 after Yeatman said he was brought into the project by Tommy Towers, whose family owns the bulk of the land involved. He said Towers was fielding proposals from other developers when he ran them by Yeatman, seeking his input.

“He knows I do a lot of new construction and wanted to get my opinion on what I thought the lots were worth and what kind of demand there would be for the property,” Yeatman said. “I’ve lived within walking distance of this property for 10 years, so I’m very familiar with the area, the needs and the potential for growth there.”

“I’m not a developer; it wasn’t something I was even kicking around,” he said. “But I called one of my builder clients and pitched the idea to him, and we decided that we were going to put our heads together and start a development company.”

Yeatman said Yellowstone has the multi-parcel property under contract.

Initially pitched in May for 190 homes, the Rural Hill plan was revised several times with feedback from county staff — and some pushback from citizens and officials opposed to the project.

The Planning Commission voted 4-1 against it, and all but one of a dozen speakers in a hearing at the meeting voiced opposition to it, according to a county staff report.

Several residents reiterated their concerns at this week’s board meeting, questioning the project’s potential impacts on traffic and schools in what’s known as the Goochland Courthouse Village area.

But with the project’s density reduced by 20 homes and in light of other changes made to the proposal, supervisors approved the requested rezoning unanimously. Local attorney Kerry Hutcherson with Rudy Coyner Attorneys at Law represented Rural Hill in the case.

“They started out with 200-some homes, and they’ve come down. I think that’s a good faith effort,” Supervisor Don Sharpe said ahead of the vote.

“This area is looking to be the area where there’s more population. People want more businesses in this area, but if we don’t have people with money in their pocket to spend at those businesses they don’t last,” Sharpe said. “I understand people don’t want quarter-acre lots or smaller, but I don’t think, after everything I’ve looked at in here, that this is a bad plan for the village.” 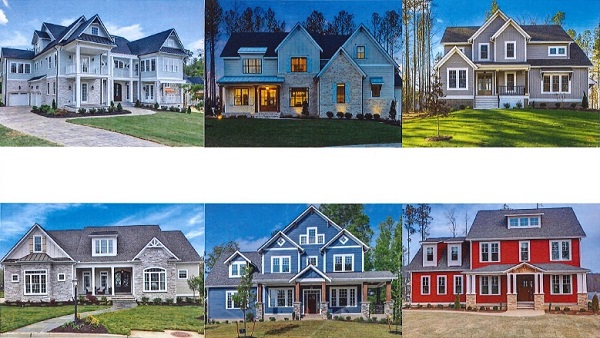 Elevations of the homes planned for Rural Hill on the James. (Courtesy of Goochland County)

Other changes to the plan included an increase in open space, from 59 acres initially to 97 acres. That makes up 37 percent of the site, above the 20 percent required under the approved zoning.

Sixty-six of the lots will be on public sewers, while the rest of the homes on the western side will use septic tanks. All of the homes will have public water connections, which Yeatman described as rare for large-acreage sites in Goochland.

Also proffered are a 2,000-square-foot pavilion, a dock for river access, and 4-foot-wide sidewalks and trails that Yeatman said would enhance the area’s walkability.

“We are building a ton of trails that are going to be public trails and connect with the existing sidewalk systems, so you’re going to be able to walk to the town for a cup of coffee or the post office or the bank,” Yeatman said.

Homes will vary between one and two stories with minimum square-footages of 1,800 and 2,500, respectively. Yeatman said sizes would average between 3,000 and 4,000 square feet, and he said styles would be comparable to homes being built in Chesterfield communities such as Hallsley and Summerlake.

“Our vision is more of what you’re seeing built in some of the Chesterfield subdivisions, but with acreage,” he said.

Homes could include garages and will vary in appearance with different façade designs and building materials. An existing dwelling and outbuildings on the property will be demolished.

Yeatman said builders in Rural Hill will vary between large production builders and custom-build firms. He said Gregoire’s Covenant Building & Design firm could be one of the builders, depending on what other firms express interest.

Site work for Rural Hill could start by the end of this year, Yeatman said, with home sales starting in the fourth quarter of next year. He said The Yeatman Group will most likely handle all sales. He said a cost estimate for the development had not been determined. 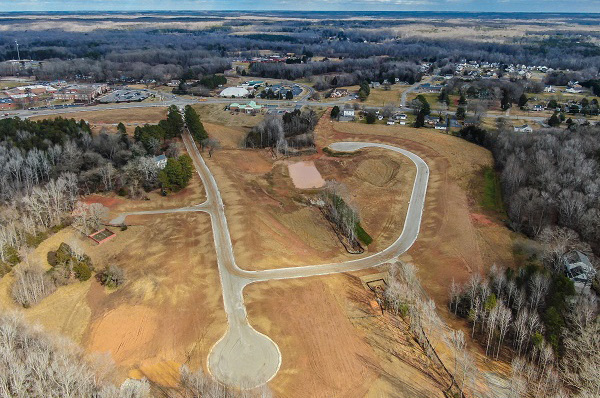 Yeatman and Gregoire worked on Rural Hill with Andrew Browning of Youngblood, Tyler & Associates, which also handled engineering for Reed Marsh. Browning said the adjoining subdivision ended up solving a challenge in providing access to Rural Hill, which will be accessed via Reed Marsh and the nearby Scott Road.

“That’s what made the project go,” Browning said of the connection to Reed Marsh Lane, which connects to the traffic signal at River and Sandy Hook roads. “That also enabled us to extend public water and sewer into the site from out of Reed Marsh. We built a pump station with Reed Marsh and had some excess capacity.”

Lawrence Liesfeld, who is developing Reed Marsh with collaborator Neil Farmer, said they’re working to finalize an access agreement with Yeatman and Gregoire, who he said compensated them for the arrangement. He said the two subdivisions would likely morph over time.

“It will all be basically one subdivision, when it’s all over with,” Liesfeld said.

Yeatman said the timing was right to move forward with Rural Hill, particularly in light of housing demands over the course of the pandemic. He also cited Goochland County’s efforts to expand broadband internet service in the area as a plus for the project.

“COVID definitely opened up an opportunity for more rural subdivisions like this,” Yeatman said. “People are wanting to go farther out, and with the ability to work from home increasing, and the increase of high-speed internet to more of the outskirts, we think we’re going to provide a great option for not only local people that want more land, but also people moving to the area looking for more space.”

I really hope that this project has new sidewalks along along all the streets and a sidewalk leading from the Village Sidewalks to the James River.

I really think Goochland County could use this to ask the builder to build the missing sections of Village Sidewalks in the Village between this project and were 522 crosses the James River.

Great point. In order for this development to work accessibility or rather walkability should be top priority from here on out. Whether that use is for humans or bikes or whatever the sidewalks need to be built into this project.

I checked with the planning department and it is going to have a lot of missing sections of sidewalks in that there will not be a sidewalk along Scotts Road along it.

Also, let’s support the notion that buyers can purchase lots directly from them rather than through the agents.brokers – most thriving communities across the US have been doing this now to avoid the pitfalls and unnecessary transactions through brokers or agents where this is an extremely old fashioned process. Real property needs title and a law firm that deals with real estate to complete the sale – that’s it plain and simple. I cannot wrap my head around with the advent of the internet why are we wasting so much money using a real estate agents in RVA. I suppose… Read more »