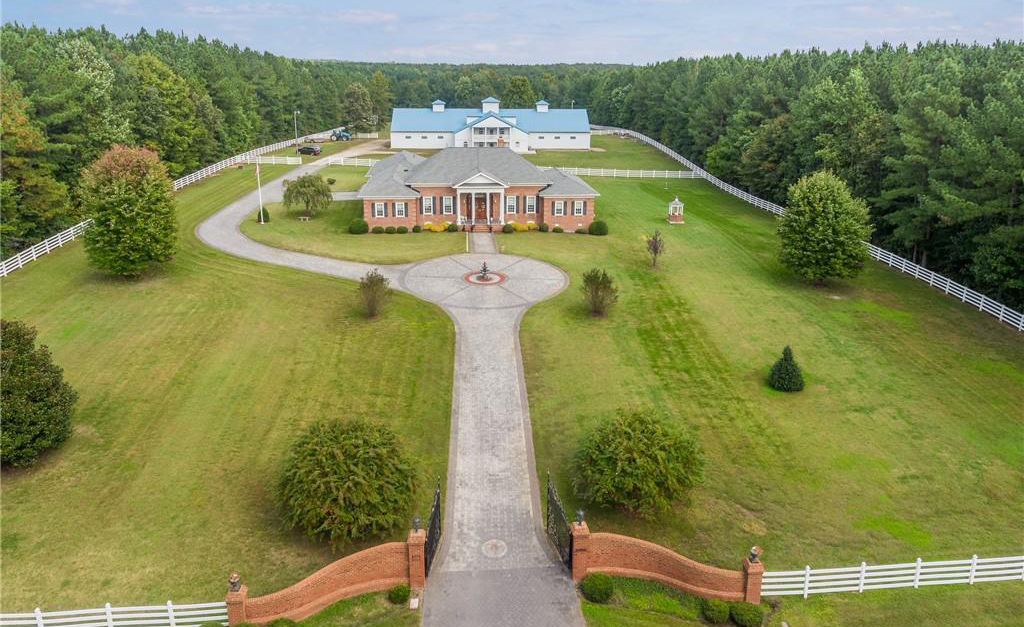 The 27-acre estate at 12800 Ivey Mill Road includes a 6,300-square-foot house and a large horse barn. (Photos courtesy of CVRMLS)

Capping a career that mixed horse breeding and soil testing, retired businessman C. Norman Jones is preparing to say goodbye to what he terms his “retirement project:” the 27-acre equestrian estate he built and has called home for over a decade.

Jones and his wife June are selling their Rose Hill estate at 12800 Ivey Mill Road, across from Chesdin Landing in southern Chesterfield County. The couple listed the property that includes a horse barn and pastures in mid-July with an asking price of $1.75 million.

Jones, whose businesses over the years have included Jones Mountainview Saddlebreds and A&L Eastern Agricultural Laboratories, said it’s time for him and June to let go of the property.

“This 27 acres has gotten to be too much of a maintenance problem for me to keep up with at my age,” said Jones, 86. 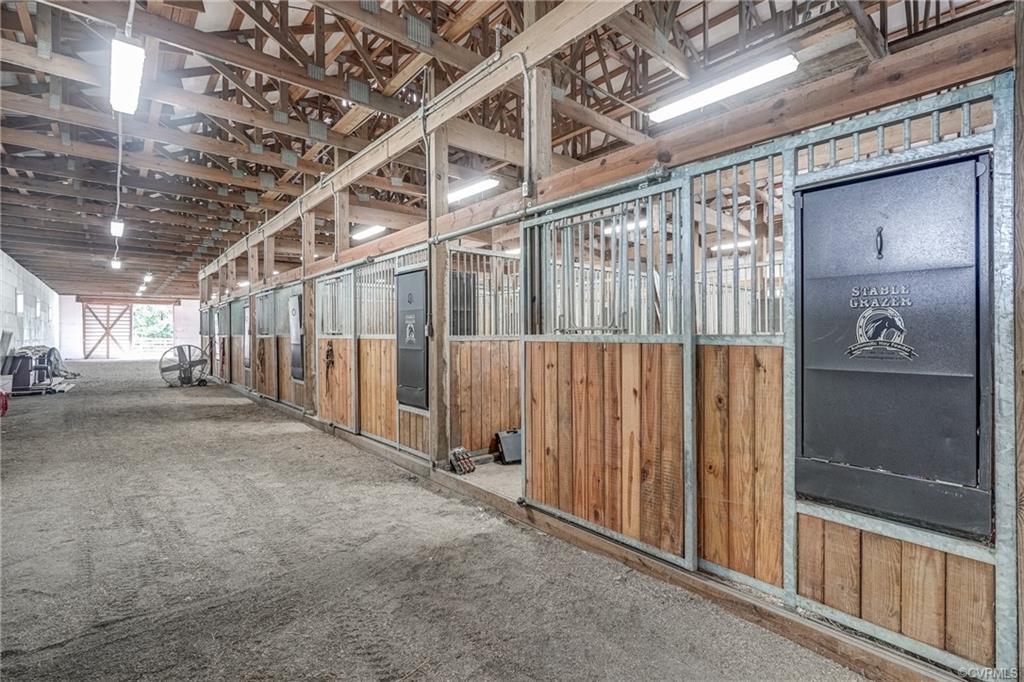 The barn includes 12-by-12-foot stalls with auto waterers and feeders.

Jones built the estate in the late 2000s, serving as general contractor, after retiring and selling his businesses in 2005. He had previously run a horse farm in Madison County that he sold when he retired and moved to Chesterfield, where June’s oldest son had a house at Chesdin Landing.

“I sold the farm, kept six of my best broodmares, brought them down here and had a trainer here for a short period of time,” Jones said. “That didn’t work out, so it was time to close the horse operation down completely.”

Jones has since sold those horses to different buyers across the country as he and June look to downsize in the area. They listed Rose Hill with Long & Foster’s Erin Williams, who herself is no stranger to breeding American Saddlebreds, known for their distinctive, exaggerated high stepping.

“My family also bred and raised Saddlebreds,” Williams said. “We did not know that until we met each other, which is kind of wild. My family had a world champion, and (Jones) knew who she was and pulled this book out with a picture.

“It’s just a really unique, special property,” she said. “For a horse person like myself, each field has a running shed, which is a great feature. They have frost-free automatic waterers in the barn and in the field. Meticulous attention to detail, to the nth degree.” 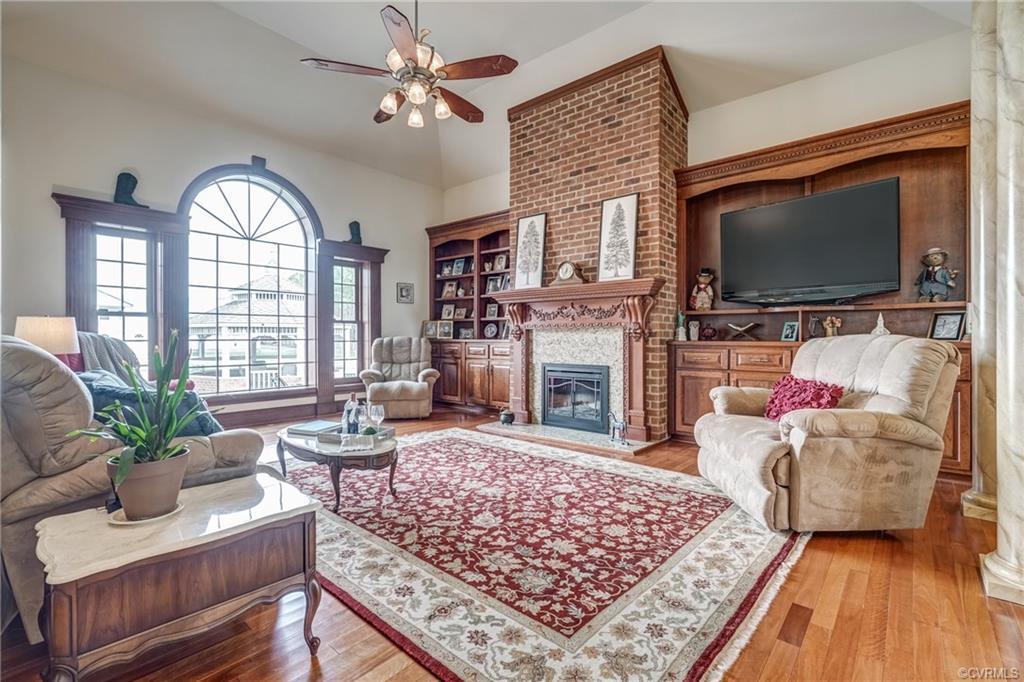 The family room of the house, which seller Norman Jones built himself serving as general contractor.

Totaling five bedrooms and 2½ bathrooms, the 6,300-square-foot single-level brick house was built to withstand tornadoes, with concrete-and-rebar walls 16 inches thick. The 11,100-square-foot barn, which has an upstairs apartment with two bedrooms and a bathroom, has similar walls but not quite as thick, Jones said.

“Southside Electric told me that standard construction in this area usually heats and cools for $1.40 to $2.50 per square foot. This property over the last 10 years has ranged from 52½ cents to a high of 83.4, and that was that cold winter we had in 2015,” Jones said, adding that the math equates to tens of thousands of dollars in saved utility costs over the years.

The barn includes 10 12-by-12-foot stalls with auto waterers and feeders, an office, and storage, in addition to the apartment. Horses can roam in the property’s four pastures, each equipped with frost-free waterers and run-in sheds.

The property most recently was assessed by Chesterfield County at $1.05 million. Williams said it was recently appraised at $2 million. 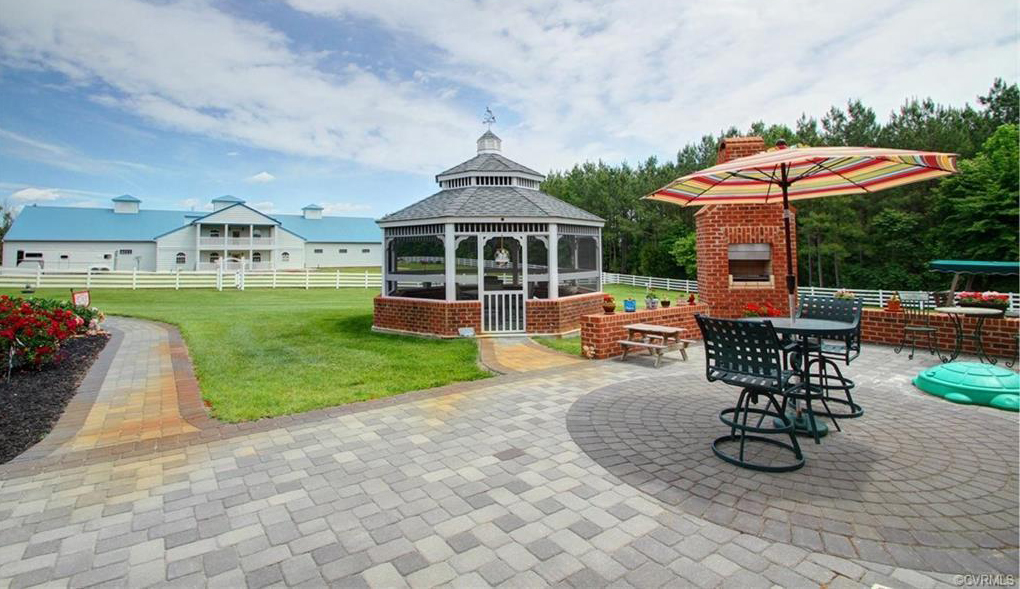 A gazebo and patio between the house and barn.

“We’ve had some interest,” added Jones, “but nobody interested enough.”

The listing marks an end to Jones’ horsing days, which he said involved several innovations. At his horse farm in Madison, Jones said his business stood eight stallions and performed embryo flushes and transfers for mares.

“We were the first farm in Virginia to do that, and the veterinary community came to us to learn how to do it,” he said. 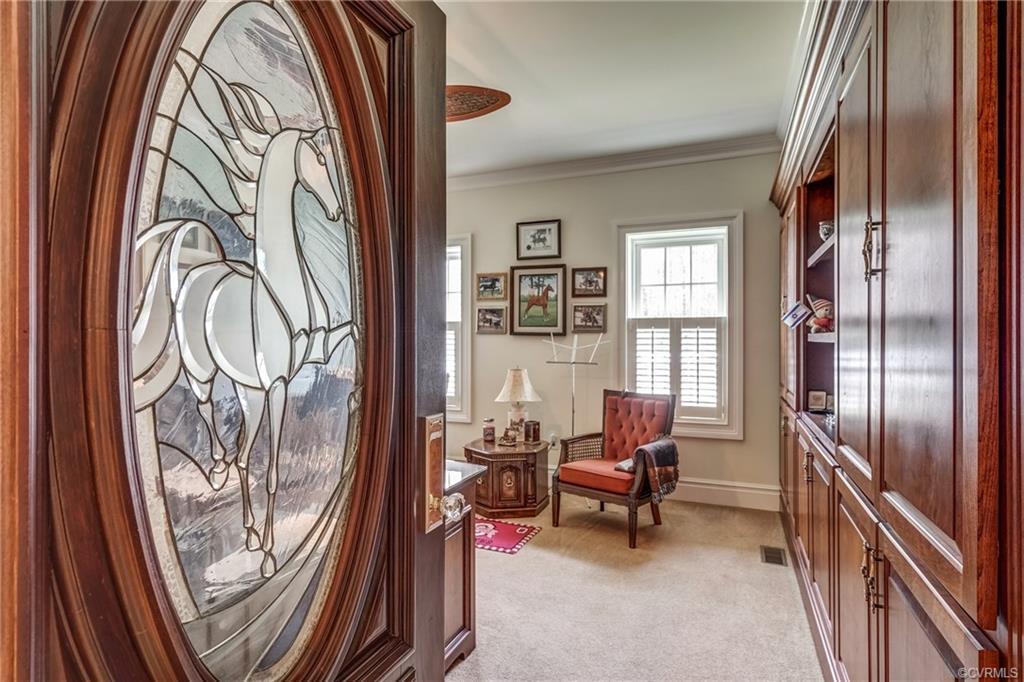 “We were the largest sludge analysis lab, I think, in the country when I sold it,” Jones said.

As for Rose Hill, Jones said he’s ready to bring his retirement project to a close.

“I’ll be 87 in November. I don’t need to be messing with horses anymore,” he said with a laugh.

As Rose Hill went up for sale, another equestrian estate in Chesterfield landed a buyer after being on and off the market since 2018. The 18-acre property at 12410 Bailey Bridge Road, previously the Hermes Alpacas farm, sold for $900,000 on July 28, three years after it was initially listed at $1.17 million.