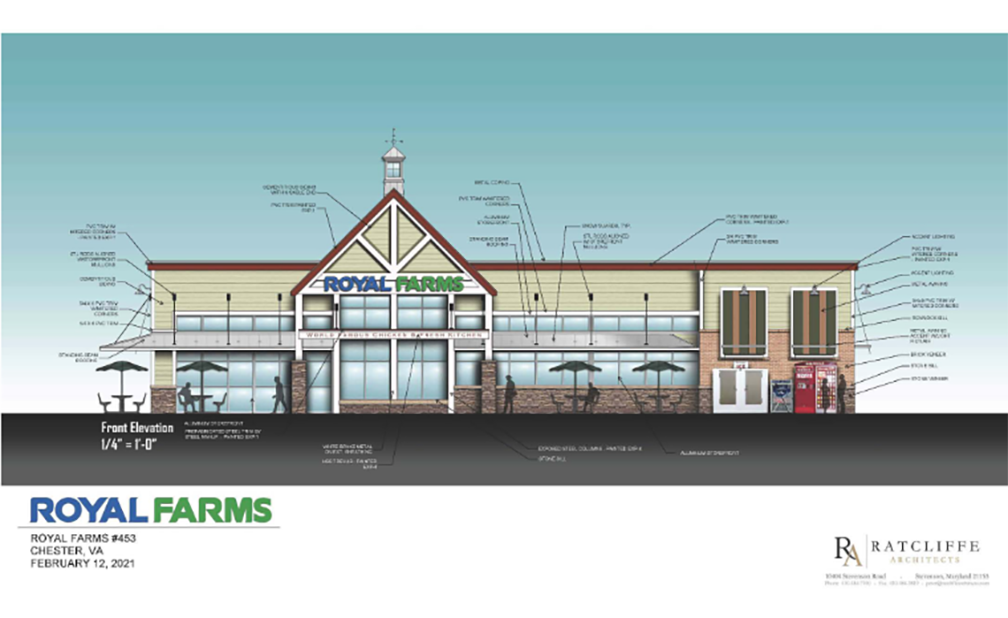 Royal Farms plans to build a convenience store with gas pumps and a car wash on roughly four acres at the intersection of East Hundred Road and Rivers Bend Boulevard. (Courtesy of Chesterfield County)

A fried chicken-focused competitor to Wawa and Sheetz is making a play in the Richmond market with an expansion into Chesterfield County.

Royal Farms plans to open an outpost at the intersection of East Hundred Road and Rivers Bend Boulevard, in the southeastern part of Chesterfield.

The 5,145-square-foot store would be new construction and feature gas pumps and a carwash, according to a Chesterfield staff report.

The Board of Supervisors approved a rezoning request tied to the convenience store last week, paving the way for its construction. The application site consists of about four acres, and the parcels involved are 210 E. Hundred Road, 230 E. Hundred Road, 13200 Rivers Bend Blvd. and a portion of 139 Meadowville Road.

Emerson said Tuesday that the assemblage is under contract to be sold to Royal Farms. He declined to share the terms of his and his wife’s side of the deal.

The parcels were most recently valued at a total of $794,000, according to county property records.

It’s unclear when the Chesterfield location is slated to open. A company spokeswoman didn’t respond to a request for comment.

Royal Farms, which has more than 240 stores across six states, doesn’t currently operate any Richmond-area stores, according to the company’s website. Most Virginia locations are in Fredericksburg and eastern Virginia.

Royal Farms arrives after Wawa, one of its main competitors, has been adding locations in the region for several years, some of which sold last year in a multimillion-dollar deal.

Wish they were going to be closer to Richmond/Midlothian area as been to the on in Fburg and the chicken is very good.

Agreed; the one is Smithfield is always clean, well stocked, and the chicken is incredible. With this one have the booth seating area?