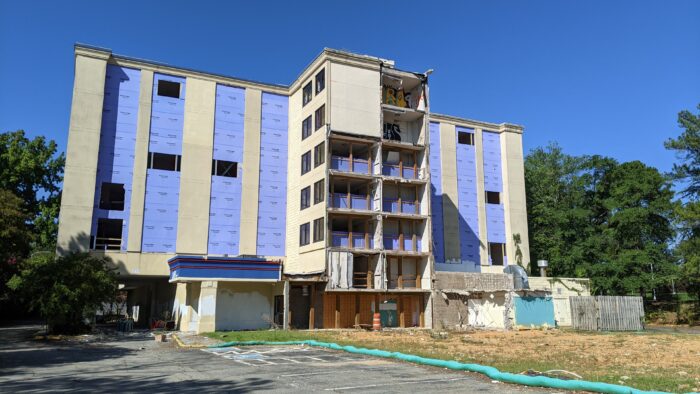 In a change of course in light of the pandemic, a local hotelier has gone back to the drawing board with its plan to redevelop a former Broad Street hotel, coming back with a new plan for a mix of retail and apartments, including corporate housing.

KM Hotels has submitted revised plans with Henrico County for the former Akaza Hotel property at 6531 W. Broad St., which it purchased pre-pandemic for $4.6 million with plans to overhaul the site with two new hotels and a 50,000-square-foot office building. 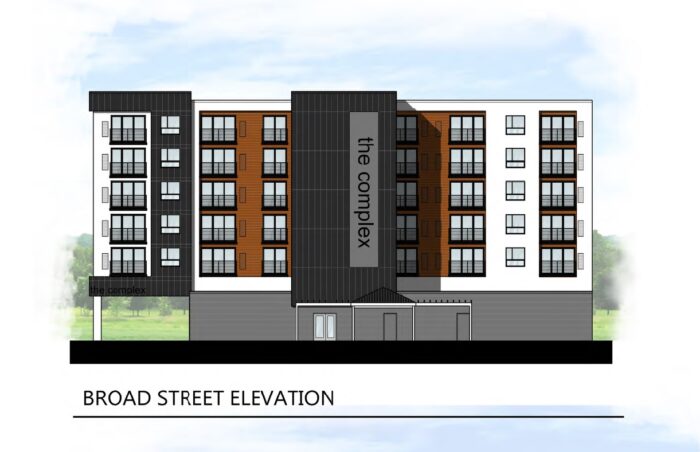 A rendering of the six-story building that would house the corporate apartments. (Images courtesy Henrico County)

Plans now call for 250 apartments – 78 of those designated as furnished corporate units for local businesses needing to house out-of-town employees – along with a parking garage and new commercial building fronting Broad Street.

Mayur Patel, KM Hotels’ president and chief operating officer, said the change was made in light of the COVID-19 pandemic’s impacts on the hospitality industry, among other market considerations.

“We were going to do a hotel, and obviously because of COVID and all the new (hotel) supply coming into the area, we decided not to,” he said.

The new project, to be called Studios at 6531, would be the company’s first venture into apartment development, Patel said.

“The usage is better. I also know that the county is in support of it,” he said. “We had been talking about this for over a year during COVID, and it just took a long time to get here.”

The linear-shaped site would be developed in three phases, with a new apartment building at the west end and a parking garage and commercial building closer to Broad.

The three-phased development would start with a conversion of the existing six-story hotel structure into the corporate apartments. The building was originally planned to become a 100-room Quinta Inn & Suites Hotel when adjoining structures on the site were razed last year.

A second phase would add a new seven- and eight-story building totaling 172 traditional apartments at the western end of the linear-shaped site. The 6.6-acre site lines the southern side of Altria’s corporate campus at Reynolds Crossing and is adjacent to apartment communities to the west and a Home Depot to the south. 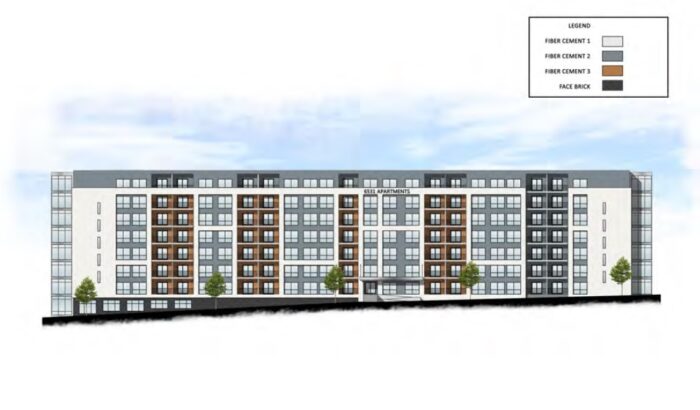 A rendering of the new seven- and eight-story apartment building.

A cost estimate and timeline for the development was not available Monday, and the plans did not specify unit sizes or rental ranges for the apartments. Patel did not have those details on-hand when reached Monday.

The project would require zoning approval and a provisional-use permit from the county. Local attorney Andy Condlin with Roth Jackson Gibbons Condlin is representing KM in those requests, which are scheduled to go before the Planning Commission Oct. 14.

In its report, county planning staff said it has concerns about the timing of the commercial component of the development, as well as frontage improvements along Broad, building heights and other details. Staff is recommending deferral to give KM time to address those concerns.

I thought they had previously pulled the plug on the hotel and said apartments were coming; I guess this is more detail with the plan submission. I will be interested to see what demand is their for corporate apartments. Most places just use extended stay hotel like Residence Inn now. I had two weeks out of town this past June with the agreed rate corporate paid Residence Inn $340ish for a week and I had separated bedroom and living room with full kitchen and two stool dining bar. The firm that does our accommodations can even do AirBnB rental but… Read more »