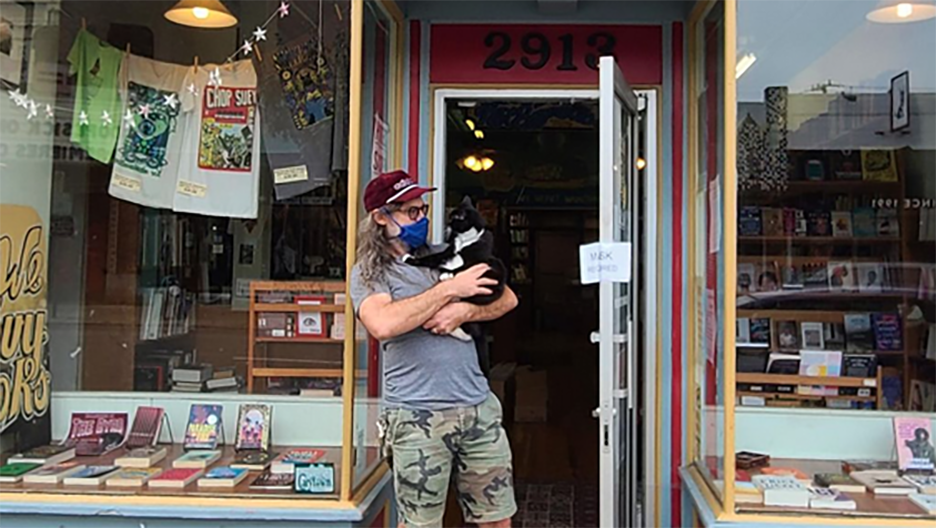 The next chapter for a well-established Carytown bookstore will be written by new owners.

WonTon, the store’s feline mascot, will stick around.

Only the business and its assets are changing hands. The building, which Tefft owns, isn’t part of the deal.

Tefft said that after 20 years at Chop Suey and the challenges of the pandemic era, he was ready to pass the baton to someone else.

“It just felt like it was time. I ended up working a whole lot more during the pandemic and that got me a little burned out,” he said.

Tefft couldn’t find an employee or friend to take over the store. So he approached the McDaniels, a married couple, about the proposal after Berkley visited the store just before Christmas.

“I was just talking to him and after he left I thought they might be interested. So I sent him an email and he wrote back immediately,” Tefft said.

Berkley said he and his wife had been in discussions about their interest in owning a bookstore around the time Tefft pitched the idea of selling the store to them.

“It’s an institution and it needed to stay here. Ward was making it pretty clear he had done his time and he needs to relax,” Berkley said. “I knew what Chop Suey meant to Richmond and I knew what it meant to me.”

Berkley has worked part-time at Chop Suey since the spring, following a stint at Fountain Bookstore in Shockoe Slip to keep occupied in retirement.

“A rising tide raises all ships and I really believe that for this town. There’s plenty of room for all of us. I’m just moving farther up Cary Street,” he said.

Berkley said the plan is to keep things largely the same at Chop Suey, though he plans to add new events to the bookstore’s existing calendar and introduce a new point-of-sale system.

Tefft opened the first Chop Suey location in 2002 at 1317 W. Cary St. The current shop at 2913 W. Cary St. opened in 2006. The two stores were run concurrently for two years before being consolidated.

The bookstore is named for George’s Chop Suey, a restaurant that formerly occupied the bookstore’s first home before the eatery closed in the 1980s.

Post-Chop Suey, Tefft said he’s looking forward to spending time with his wife and 4-year-old son. He also plans to spend more time on Chop Suey Books Books, his publishing venture that has put out works by local authors.

“I’m definitely going to have some publishing projects waiting to get started on. So I’ll probably do something along those lines,” Tefft said. “It’s something I can do without retail hours … Obviously, I’ll have to let that name go.”

I moved to Richmond 20 years ago and immediately loved this bookstore. I was able to find rare and out of print architectural books, which as a young architect fresh out of school back then, was fantastic. Best wishes to Mr. Tefft and the new owners.