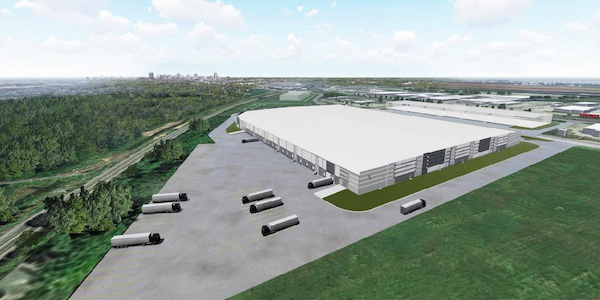 A rendering of the forthcoming Deepwater Industrial Park. (Courtesy of Hourigan Development)

A sprawling new regional distribution center for Lowe’s Home Improvement will now be built in South Richmond instead of Hanover County, where work on a previously planned site is ramping back up after a half-year delay.

Lowe’s has signed a lease for a 1.2 million-square-foot facility at 3021-3205 Commerce Road, in Hourigan Development’s Deepwater Industrial Park, a Lowe’s spokesman confirmed this week.

The location is a change from Lowe’s previous plan to take a 1.1 million-square-foot center under development at Hanover’s Graymont Industrial Park site.

The move also makes available the Hanover site, where Indiana-based Becknell Industrial is developing the $50 million-plus facility that will now be built on spec. Marketed as Graymont Industrial Park, the roughly 200-acre site is just north of Ashland, north of Hickory Hill Road along the west side of Interstate 95. 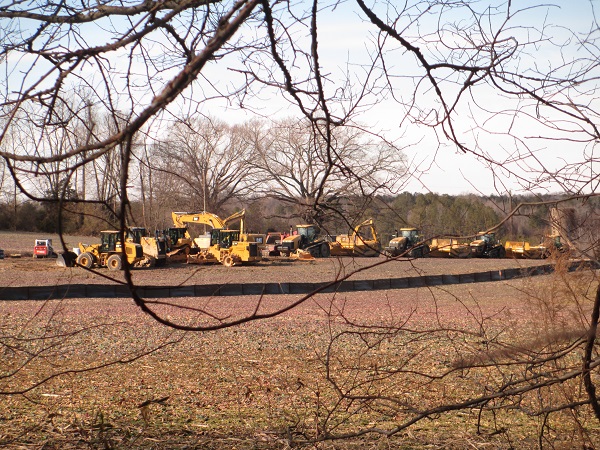 Prep work has resumed at Graymont Industrial Park, where equipment is shown in this photo from February. (BizSense file)

Prep work for that facility recently resumed after being halted earlier this year, when the county issued a stop-work order because required land disturbance permits had yet to be approved.

Those permits and others have since been approved, the bulk of them earlier this month. They include a demolition permit for a century-old house on the site that the state has deemed eligible for historic recognition. The land also was previously the site of the former Camptown Races horse racing track.

Lowe’s spokesman Steve Salazar would not say whether the work delay prompted the change in location from Hanover to the city. He said the company signed a lease for the Deepwater space over the summer.

“Lowe’s is no longer pursuing a facility at this location due to a variety of factors,” Salazar said of the Graymont site. “Becknell has been a good partner during this process, and we greatly appreciate the support we have received from all the stakeholders associated with this project.”

He added, “The location at 3021-3205 Commerce Road in Richmond will be run by a third party, and we plan to begin shipping appliances and other highly deliverable items out of the Richmond bulk distribution center by the summer of 2022.”

Lowe’s will lease the entire facility as part of a $1.7 billion investment to expand the national retailer’s distribution network through 2023. The Deepwater facility would replenish inventory at more than 100 stores in the Mid-Atlantic region.

Hourigan started work on the 110-acre Deepwater site in June. The multi-phase development along I-95 is planned for up to 1.5 million square feet of warehouse space, up from 1.2 million reported when the project broke ground.

A call to CEO Mark Hourigan was not returned Wednesday. Colliers International’s Rob Dirom and Joe Marchetti are marketing the Deepwater space.

With Lowe’s out, Becknell is moving forward with developing the Graymont distribution center as a spec building. Last month, an entity tied to Becknell purchased the two-parcel property for just over $4.74 million. Hanover County most recently assessed the parcels at just under $2 million total. 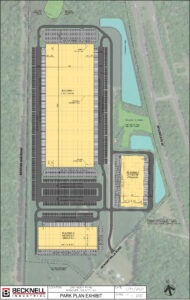 A conceptual site plan from Becknell for the Graymont Industrial Park. (Courtesy of Hanover County)

The land was purchased through an LLC that lists Becknell’s Indiana headquarters as its principal office address. County property records list the LLC’s mailing address as that of Raith Capital Partners, a New York-based private investment firm that has done local deals with Becknell before.

This spring, Raith entered the Richmond market with its purchase of five industrial properties from Becknell, dropping over $65 million for five warehouses in Henrico, four at the Airport Distribution Center and another at 8750 Park Central Drive.

The seller in the Hanover deal was Richmond-based Brooks Investment Co., which had owned the two parcels since the mid-2000s, when it purchased them for just over $1.69 million combined. Brooks was represented in the deal by Porter Realty’s Clifford Porter.

Linwood Thomas, Hanover County’s economic development director, said the Graymont building, once finished, will remain a valuable asset for the county as a spec site, even if an end-user is not currently lined up.

“It will be one of the largest speculative buildings in the region,” Thomas said. “Over 1.1 million square feet of space in one contiguous building, with the potential for some additional smaller ancillary pad sites for economic development on that parcel.”

Asked if the delay in the project played a part in Lowe’s’ decision, Thomas said that the site work started before it was supposed to and resulted in a fine. But he said federal permits and other factors also held up the project.

While he acknowledged that Lowe’s was lined up for the site, he said the company had been strongly pursuing the location but had never signed a lease or confirmed it would go there.

“Becknell has still acquired the property. They were going to build their distribution facility for Lowe’s, but due to the speed to market, because there were some timing issues with that, Lowe’s has since moved on,” Thomas said. 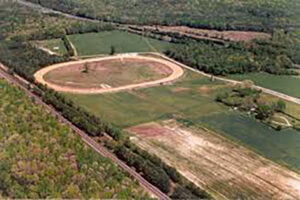 The Graymont Industrial Park site includes the former Camptown Races track. The Greymont house is visible to the right. (Courtesy of Hanover County)

“The good news is the county’s still going to generate a significant amount of capital investment and revenue from Becknell’s investment, and Becknell is one of the largest developers in the country,” he said. “We didn’t get the Lowe’s project, but we anticipate, due to the strong prognosis for the industrial market, that we will hopefully land another user that will be equally good if not better.”

Meanwhile, a comparable distribution center and regional headquarters for Wegmans Food Markets also remains in the works in Hanover.

In July, the supermarket chain paid $4 million for the nearly 220-acre site where its 1.1 million-square-foot, $175 million facility is planned. Thomas said the company has since broken ground on the project.

The land purchase followed a string of permit approvals and court decisions in Wegmans’ favor, but at least one legal challenge to the project remains in play.

A water protection permit for the project is being challenged in Richmond Circuit Court by a homeowners group called Protect Hanover, the Hanover NAACP and other plaintiffs. A hearing in that case is scheduled Oct. 25.