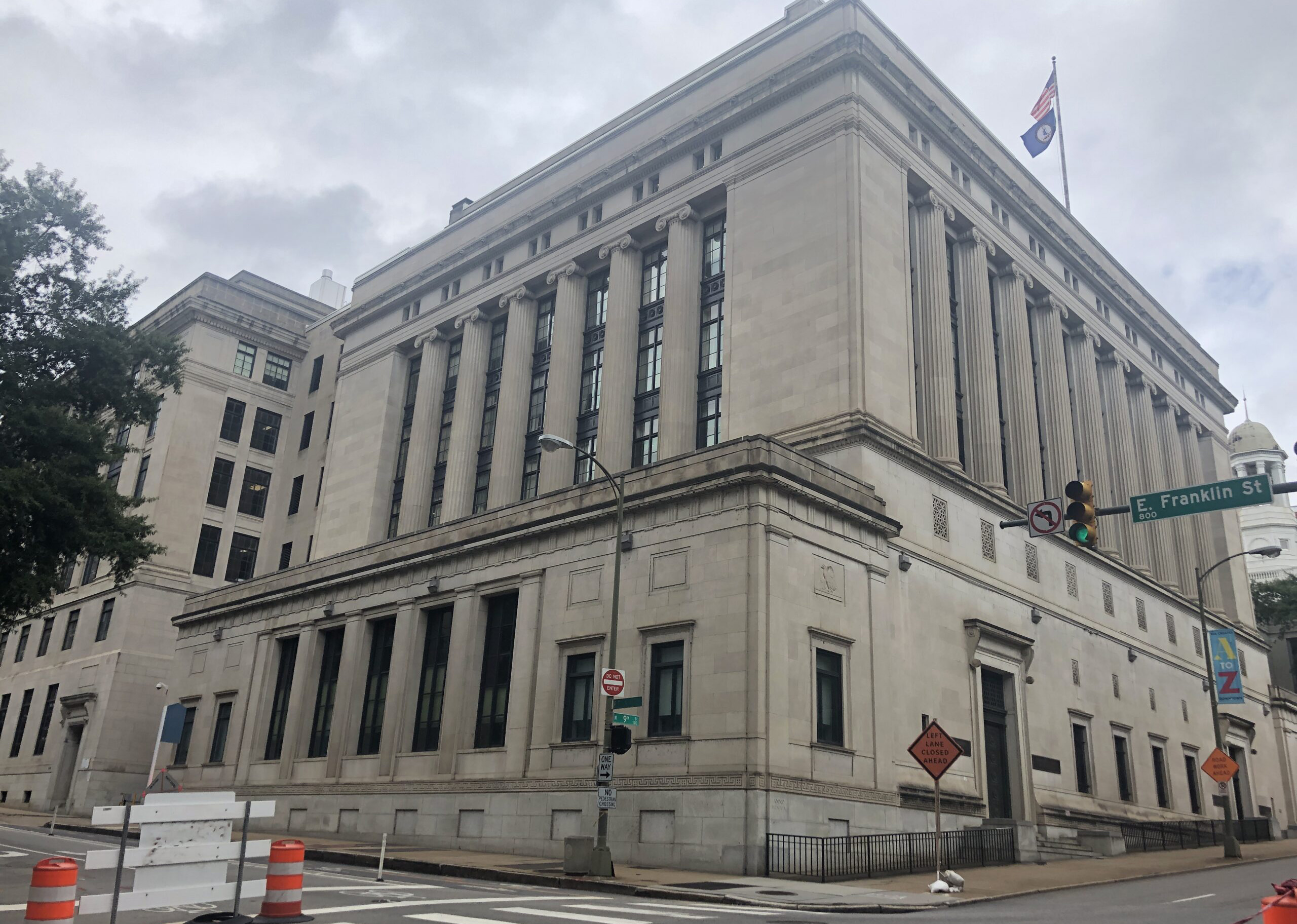 At the corner of East Franklin and North Ninth streets is the current Supreme Court of Virginia building, which was initially built in 1919 before being added on to in the 1950s. (BizSense file)

The state government’s procurement arm has taken the next incremental step in one of two major downtown redevelopment projects.

Virginia’s Department of General Services last month tapped a team led by local architecture firm Baskervill to design the future home of the Virginia Court of Appeals and Supreme Court of Virginia.

The selection is one of the first dominoes to fall in the process to replace the current Supreme Court of Virginia building at 100 N. 9th St. with a new building at 900 E. Main St., where the Pocahontas Building currently stands. The east wing of the Pocahontas Building is expected to be demolished to make way for the new building that the Supreme Court of Virginia and state’s Court of Appeals will share.

The project is estimated to cost at least $155 million.

DGS Director Joe Damico confirmed that a design contract for the new courts building was awarded in November. Renderings and finer details have not yet been disclosed.

“There’s still a long way to go, still a lot of discussions to be had before we really get into some serious design decisions,” Damico said.

The first public look at the future courts building will likely come at a public meeting of the state’s Art and Architecture Review Board next spring or summer, Damico added.

“Baskervill didn’t come in with a specific design. What they did is they came in and said, ‘Here’s how we’re going to approach developing the space needs and the design of the building.’ That’s how the procurement evaluation was conducted,” Damico said. “They now sit down with the courts, understand what their program needs are, then they take that and design it into the space.”

The state issued a request for proposals for the project over the summer, along with an RFP to replace the James Monroe Building at 101 N. 14th St., which at 26 stories is the city’s tallest building.

Both the Supreme Court and Monroe buildings have myriad issues involving compliance with the Americans with Disabilities Act, security and safety and other design problems, which prompted the need for replacements.

Damico added that they have not awarded a design contract for the approximately 13-story, 350,000-square-foot tower that’s planned to replace the Monroe Building at 703 E. Main St. That site currently houses the former Virginia Employment Commission building. Damico said he anticipates a winning bid will be selected within the next two months. The project is estimated at $283 million.

“My hope would be before the end of the year,” Damico said.

Damico previously said he’d expect the state to retain the Supreme Court building due to its historic significance and proximity to Capitol Square, while the Monroe Building may be declared surplus and put up for sale.

Those decisions will ultimately be decided by the General Assembly and the new governor’s administration. Damico said DGS is continuing down the path for these projects as currently authorized.

“Each administration can establish their priorities and I can’t answer for them, but I’ll tell you that this is how we’re proceeding at this time and we’ll see how it plays out going forward,” he said.