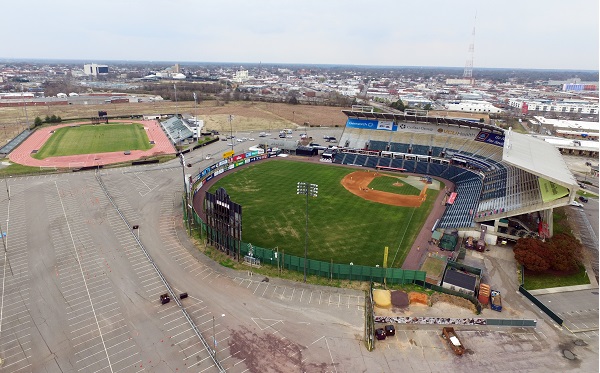 The latest push in the yearslong effort to replace The Diamond and develop city-owned land around it is now officially out in the world.

The City of Richmond on Tuesday issued a formal request for interest (RFI) for a ballpark-anchored mixed-use redevelopment of the roughly 60-acre site it’s been marketing as “The Diamond District.”

The long-anticipated document kicks off a two-part solicitation process that would culminate next year with the selection of one or more development teams to work with the city on a multi-phased project. If successful, the effort would be in keeping with Richmond’s master plan, while also keeping the city’s minor league ballclub in town.

The Richmond Flying Squirrels, the local Double-A club that’s been promised a new ballpark since its arrival in 2010, would need a new stadium by the 2025 season to be compliant with new facility standards that were implemented for professional baseball this year. Renovating the 36-year-old Diamond to meet those standards is not considered feasible, according to the document.

To meet that deadline, the RFI calls for the new, 10,000-capacity stadium to be built first – and in a new suggested location.

The location along the boulevard, according to the RFI, is intended to “integrate other retail, residential or commercial uses wrapped around all or a portion of the stadium.”

The new stadium, which would seat 8,000 with space for 2,000 standing-room patrons, is expected to fill seven to 10 acres and cost about $80 million. The Diamond currently seats about 6,000.

Sports Backers Stadium would effectively be relocated as part of the overall development effort, as would the nearby Arthur Ashe Jr. Athletic Center. Developers are asked to assist in relocating the functions of those facilities to free up those sites for the larger redevelopment. 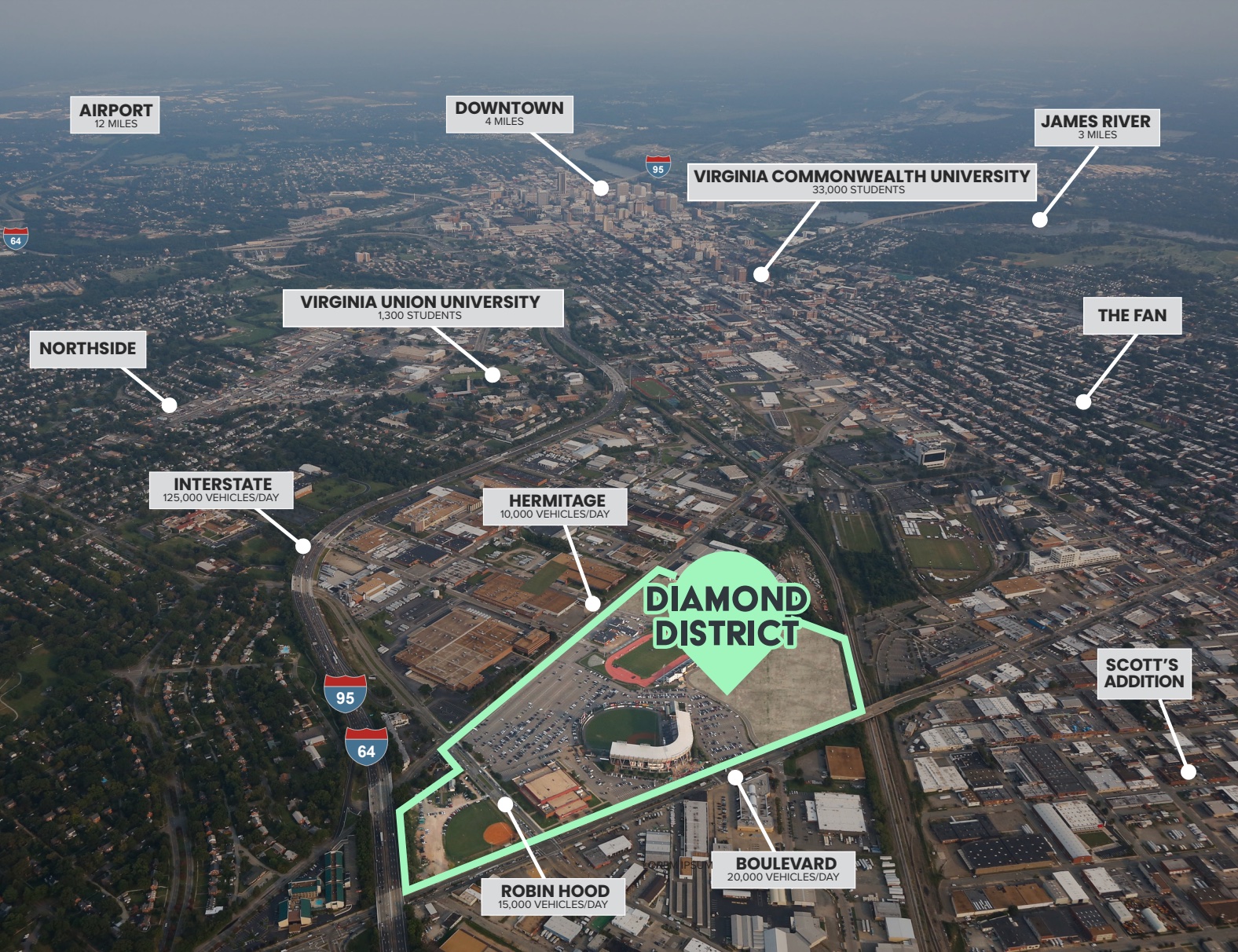 Now dubbed The Diamond District, the City of Richmond is beginning the process to redevelop The Diamond and the land surrounding it on North Arthur Ashe Boulevard. (Courtesy city documents)

The RFI describes “an ideal project” as including those components, as well as new uses including office, residential and retail, a hotel to support those uses, and upgrades to infrastructure such as water, sewer and roads. The residential component would consist of rental and for-sale homes that would include some units targeted to lower-income households.

The full RFI document is posted online and can be viewed at rvadiamond.com. RFI submissions are due at 3 p.m. Feb. 15, with a pre-submission virtual meeting and site tour scheduled in January. Developers will also have the opportunity to submit written questions.

Once the submission deadline is closed, a panel consisting of city staff, City Council members and VCU staff will evaluate the responses and compile a shortlist of firms to be invited to submit proposals. A request for offers would require those proposals in April or May, and final selections would be made in the spring or summer.

The RFI emphasizes that proposals are expected to utilize financing approaches that minimize public investment and risk and maximize private investment, such as through direct equity contributions, team lease payments, sharing of naming rights and other approaches.

It describes public funding as typically supported by revenues from property taxes, such as via tax increment financing, as well as sales taxes within the project area, lodging taxes, admissions taxes, and other revenue sources.

The city developed the RFI with consulting firm AECOM, which also worked on the Richmond 300 master plan update and related planning efforts that remain underway. Maritza Pechin, a former AECOM associate who joined the city’s planning staff this year, is leading the RFI effort.

The RFI includes a market analysis, ballpark feasibility analysis and other supporting documents produced by AECOM, as well as excerpts from Richmond 300 and other city plans.

The ballpark feasibility plan assumes that the Flying Squirrels and VCU would pay an unspecified rent for use of the stadium, which would host about 65 Squirrels games per year, 20 VCU baseball games, 10 high school games, other amateur sports and spectator events, two concerts, and 100 non-spectator events such as meetings and receptions.

The plan states that The Diamond, built in 1985, is the second-oldest Double-A ballpark in the country and is considered functionally obsolete. Earlier this year, Major League Baseball issued new facility standards that put The Diamond out of compliance on issues such as lack of dressing facilities for female staff, lack of commissaries and dining areas, insufficient clubhouse, training and weight room space, and a lack of enclosed pitching and hitting tunnels.

Despite those challenges, the document states, the Flying Squirrels – the Double-A affiliate of the San Francisco Giants – have achieved a total annual attendance of 400,000, ranking third-highest of any Double-A ballclub and 23rd among all MiLB teams in 2019.

Hmmmm…. SOUNDS good, at least on the surface. The CIty putting out a RFP instead of trying to determine the outcome from the get-go (and then, if Past is Prologue, failing miserably) is what intelligent and uncorrupt cities do. New ballpark? Who will pay for this? The Flying Squirrels? One of the reasons I loved Mayor Wilder was that he was not afraid of these Sports boosters and private teams and just told them flat out that building them places to do business was a bad deal for the city (books have been written about this — if you don’t… Read more »

I hate to bust your bubble, but anyone who knows about RFPs knows they can be 100% slanted to pre select the winner.

I will say, Doug Wilder had the lowest murder rate in the city for quite some time before he was mayor and the record is in place.

And telling the R-Braves to take a hike was a totally valid decision at the time.

But i am confused because i thought VCU was going to build a stadium for their team and lease it out to the Squirrels, is that no longer happening?

I welcome anyone bursting any of my bubbles, real or imagined Ed. What you say is correct but it does leave some possibilities open as opposed of back-room deal (not nec. sweetheart ones) that are presented to the taxpayers as fait accompli. For instance, the city still tries to control what is happening at the Colosseum site but has pretty much been forced to see the light, and the results seem to be MUCH better for the taxpayers if not the political elites of the State. Hmmmm… yeah, thanks for the reminder… not sure that VCU should be spending MORE… Read more »

If nothing else, the Richmond City RFP process for “major projects” so far is short on success stories. I hope they end up with a world class re-development project, but unfortunately I don’t have much confidence in Richmond to pull that off.

The internet states that The Diamond’s seating capacity for baseball is 12,134 and the capacity (as now made available at Squirrels games) is 9,560. Perhaps 8,000 is the capacity designed to ensure AAA baseball never, ever returns to Richmond.

Richmond seems to be doing fine without it.

One could even make a totally unscientific theory that having the Braves here was keeping population growth down.

First, love to see what the current site generates in admissions and meals taxes as the Squirrels and Rams number of events will not change neither will attendance. Already (Pre-Covid) it several dozen smaller events like corporate picnics and team building in the facility. Second, when did the GA has approe sales tax re-allocation or is this the local $ only which means City coffers (recently drained due the to the accounting error of $12M) will decrease. Finally, I am glad we waited so long for this “novel” approach we were promised to due this deal. Oh wait it is… Read more »

Look at that photo — what a horrible waste of prime space!!