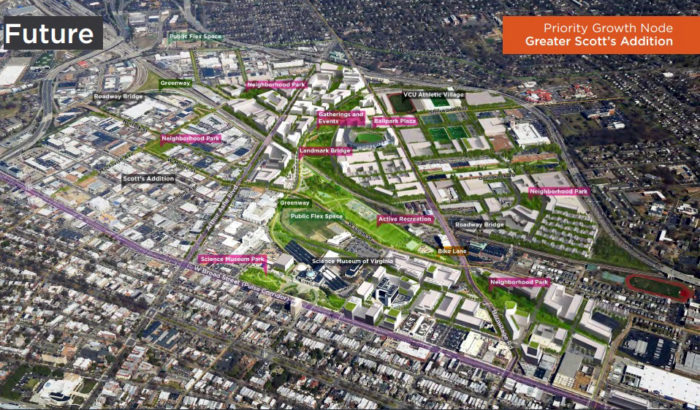 Aerial of area as envisioned in the master plan courtesy City of Richmond.

When The Diamond is replaced with a new baseball stadium, it won’t be part of a planned VCU athletic complex on the site of the current Virginia ABC headquarters.

That is, at least, if city planners have their way.

The draft Richmond 300 plan, a years-in-the-making update to the city’s master land-use plan, envisions The Diamond’s replacement remaining on the west side of Hermitage Road, generally across from the ABC site where VCU is planning an athletic village complex.

Discussions up to this point have suggested that the complex would include a new stadium that VCU would share with the Richmond Flying Squirrels, freeing up The Diamond to be demolished to make way for new development along Arthur Ashe Boulevard. 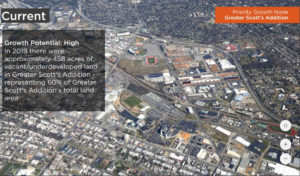 But in a presentation Thursday on one part of the draft plan – an area that city planners refer to as “Greater Scott’s Addition” – Mark Olinger, the city’s director of planning and development review, said recent discussions made clear that the athletics village would not be able to accommodate a baseball stadium.

Olinger, who has been leading the Richmond 300 effort, said VCU’s plans for the complex, which would include indoor and outdoor tennis courts and other sports facilities, “became very difficult for the ball diamond to fit into and make all of the other items work.” In light of that, the plan now envisions the new stadium to be built among mixed-use development on the west side of Hermitage.

A rendering presented Thursday and included in the plan shows the new stadium in the area of the existing Sports Backers Stadium, catty-corner from the ABC site and southwest of the intersection of Hermitage and Sherwood Avenue, which would be extended west to connect with Arthur Ashe Boulevard.

The new baseball stadium would bookend the northern end of what’s envisioned to be a crescent-shaped swath of green space that would bisect the area between the boulevard and Hermitage north of the railroad tracks. The open space would include a greenway with a bridge crossing the tracks, event and gathering areas, and park space stretching across Hermitage as far east as Allen Avenue. 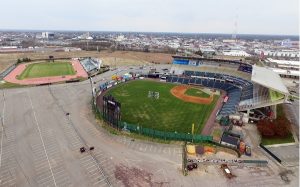 Sports Backers Stadium, which VCU owns, is not shown in the rendering, though plans for the athletic village include a soccer stadium and track and field complex, among other facilities.

The area rendering was among several aspects of the plan presented in a virtual meeting Thursday – one of several public “summits” that city planners are using to roll out and highlight certain parts of the draft plan, which was released June 1.

Thursday’s summit focused on the area generally east of the boulevard and north of Broad Street, including The Diamond and other city-owned properties that make up a 60-acre site the city has long eyed for economic development.

Years in the making, the Richmond 300 plan – intended as a growth guide through the city’s tricentennial in 2037 – has as recently as February shown the new baseball stadium as part of the athletics village complex, with Sports Backers Stadium remaining as is.

With the baseball stadium now across the street, the latest version of the plan shows the athletics village filling the ABC site and additional acreage south of Sherwood that VCU purchased earlier this year. The state has given VCU first right of refusal on the ABC site as it relocates its headquarters to Hanover County. 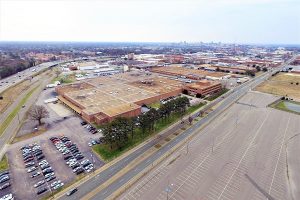 The plan calls for high-density mixed-use development in the area of Ownby Lane and Overbrook Road, where such development is already underway. Planners likened that area’s potential to Scott’s Addition proper, where the plan also calls for a central neighborhood park.

The parking lot in front of the Children’s Museum of Richmond along Broad Street also is eyed to become a park, and discussions during Thursday’s presentation indicated that plans for the Arthur Ashe Athletics Center next to The Diamond now call for a conversion to a fieldhouse that would be opened to public use.

Olinger emphasized the potential for the “Greater Scott’s Addition” area, more than half of which he said is considered underdeveloped. Decades from now, he said the city sees thousands of people residing in the area.

Using a baseball pun, Olinger said, “This is a home run area. It will take a while to get there from here, but we think we have the ability as we go through this process to put in place the building blocks, the framework, to have something that’s really transformational for this part of Richmond.”

Thursday’s presentation can be viewed here, and a video recording of the summit is available here. The full Richmond 300 draft can be viewed on the plan’s website, which includes details on future summits and recordings of previous presentations. Feedback on the plan is sought from the public through July 13.

Next up in the plan’s rollout is a summit tonight on the downtown area, with a focus on the area around the Richmond Coliseum.

Planners are hoping for a lot of participation in that summit, as city administrators have described it as an opportunity for public input on what people envision for city-owned properties in that area. The city is conducting appraisals and preparing to declare those properties surplus ahead of a formal request for development proposals, of which the city has received two in the wake of the failed Navy Hill plan.

Details on Monday’s summit are available here. Additional summits are scheduled through the rest of the month, all starting at 6 p.m. Summits later this week focus on the Bellemeade and Bells Road areas along Route 1 (Tuesday), Southside Plaza (Wednesday) and Stony Point Fashion Park (Thursday).

Just gets better and better. How long until this is project is killed off, six months…18 months?

It’s all very exciting of course, including the projections to increase Richmond’s city population by 130,000 over the next 20 years. But then, when I look at the access to I-95 at Arthur Ashe Boulevard, I still see what appears to be a stoplight. All those thousands of new residents, new sports venues, and businesses are going to enter and access I-95 by a stoplight? Is there something I’m missing?

I seriously doubt all 130,000 are going to be taking the one exit. Plus much of the transit for the residents of this area would likely be geared more towards local roads and not interstates.

Hmm. I doubt a baseball diamond maximizes revenue for one of the more exceptional I-95 interchanges along the entire East Coast. I agree with Bruce and David in that 130K people will put a serious strain on the infrastructure to the point of its collapse. Of course the work-from-home, WFH, movement will eliminate the traffic concern (I say this “tongue in cheek”). Residences typically drain more $ from municipalities than they add, unless the municipality runs on massive tax rates. The end result of the plan will be lower-income residents will suffer due to higher taxes and inferior public services… Read more »

I understand that local residents will not use I-95. 70% or more of the Squirrels fans are non-city residents though and they use the freeways to get there and back home. perhaps by the time all of this is completed, traffic jams will no longer be a concern.

Do the squirrels have issues with traffic now? Well, in non-covid times. What’s the solution? Another interchange? Don’t ever put anything there? What?

Kids. Kids. It’s all settled. The city already has this under control. Nothing to see here. Move along.

Haven’t you ever heard of the Pulse? It will cure all traffic issues. It’s working great right now and will only get better in 40 years when folks figure out to turn left from the middle lane and the pulse stops running over people when it pulls crazy Ivan’s at the intersections.

I am all for green spaces in cities, completely behind active lifestyles and enjoy watching and participating in sports. What I’m trying very hard to get behind is an athletics village wedged into a core of a city right up against the main arterial road on the East coast of the USA.

Income (or lack of) to the city, health of athletes, traffic, best use of site, take your pick of questions raised.

It’s called reality. If VCU buys it (did they already do that?) or gets it as surplus from ABC, which is another state entity, they can do what they want with it since they are part of the state. Local zoning does not apply to them. Recognizing what VCU plans to do with it and working around that is probably the best thing to do at this point.

Those sorry idiots on city council need to wake up and smell the coffee. The Richmond tax base has been carried on the backs of homeowners for a number of years. Council members can continue to pat themselves on the back for not increasing the tax rate but the reality is that most homeowners in the city, like myself, have struggled with huge annual increases year after year due to the rising assessments. There is growing enthusiasm nationwide by property owners to go on a real estate tax strike. We can’t breathe either.

Are you talking about real estate tax rates? When did they go up? The real estate tax rate has been flat since 2008 and went down the four years before that. How can assessments stay flat when there has been so much improvement and demand in the city over the last 15 years? Surely you will be happy to indulge the new value of your home when you decide to sell, no?

I think it’s worth pointing out the distinction between marginal increases in property taxes and actual suffocation at the hands of the state.

Which will come first, the demise of MiLB from the pandemic or a new stadium? I so feel sorry for Todd. Is the deal off or did the stadium just move?

Ambitious but times and priorities are quickly changing. With more important issues in front of the city, a pandemic that has halted minor league baseball this season and the contraction of an estimated 40+ minor league teams, I’m not sure a baseball-centric development is really a high priority on the minds of RVA citizens and businesses.

Bert, do you think anyone in City gov is smart enough to think like you? Don’t be surprised if they try and chase the dying flame again. Maybe they can toss some more $$$ at the Redskins while they are at it if they agree to host a virtual training camp on a day that ends in Y.

Oh I expect they’ll chase. City officials have proven time and time again to be out of touch as long as I’ve been alive. SMH