The future look of the Ownby Lane-Overbrook Road neighborhood near The Diamond continues to become clearer, as additional plans have been filed for a Hardywood brewery-anchored development while work has begun on the next phase of The Cooperage apartment complex.

In April, Spy Rock Real Estate Group filed plans with the city providing new details of a sizable mixed-use project in the works near the intersection of Ownby Lane and Overbrook Road.

It would include a mix of apartments, condos, townhomes and commercial space, and will use the full five stories allowed by the B-5 Central Business District zoning designation given to the sites this year.

Plans show the project will involve razing the current home of local investment bank Boxwood Partners at 2413 Ownby Lane, as well as the industrial buildings at 1601 and 1611 Overbrook Road.

An L-shaped building will rise along Overbrook Road, shown here.

A 164,000-square-foot L-shaped building will rise along Overbrook Road, housing 188 apartment units. Of those, 107 units will be one-bedroom, with the remaining 81 units being two-bedrooms, and at the ground level will house 22,000 square feet of commercial space. That building also will have an underground, 263-space parking deck.

Hardywood’s original home at 2408 Ownby Lane will make way for a mix of condos and townhomes. The brewery this year announced its plans to vacate the building and consolidate its local operations into 2410 Ownby Lane next door, which will be renovated as part of the new development.

Plans show 32 “two-over-two”-style condos will rise on the 2408 plot, along with four four-story townhomes. Poole & Poole Architecture is designing the Overbrook building, with Kimley-Horn as the engineer.

Across the street at the Boxwood site, Spy Rock is planning a slightly smaller building, consisting of 105 apartments across 105,000 square feet and 11,000 square feet of commercial space.

A roughly 116,000-square-foot building is set to rise at 2413 Ownby Lane, where Boxwood Partners currently operate.

Plans show Boxwood’s office would be demolished, and it’s unclear whether Boxwood, which bought the land in early 2019 and still owns it, will continue to operate in the neighborhood. Boxwood’s Patrick Galleher was not available for comment by press time.

Fultz & Singh Architects is designing the future 2413 Ownby building. No general contractor is listed on either site’s plans.

Hardywood co-founder Eric McKay said the company is preparing to open its taprooms to the public next week with some specific coronavirus guidelines.

The brewer will be setting up an outdoor beer garden at 2408 Ownby, while construction on 2410’s renovation continues. McKay said they’re still aiming to open the renovated 2410 Ownby facility this summer, at which point they’ll begin moving out of 2408. 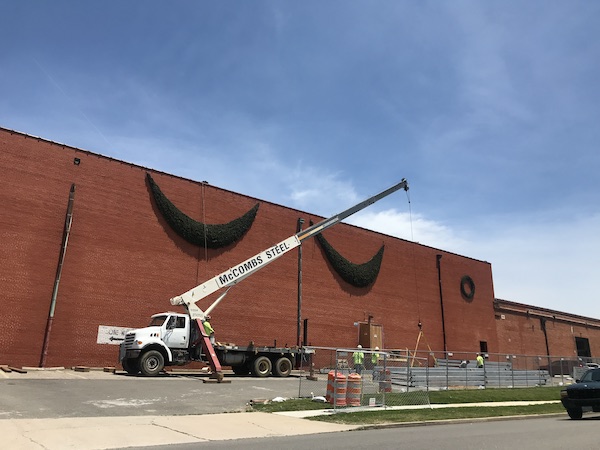 Work is getting started on the final section of The Cooperage. (Mike Platania)

Around the corner, another development adding density in the area has begun its second phase.

Developers Louis Salomonsky and David White of Historic Housing have started work on the final section of The Cooperage, their apartment conversion of a century-old tobacco warehouse across Overbrook Road from Hardywood.

Openings have been made in the walls of the brick building’s westernmost end to add 55 more apartments to the 117 units completed so far, bringing the total count to 172.

The 55 one-bedroom apartments will fill out the remainder of the building, with monthly rents ranging from about $1,000 to $1,600. Rents would include utilities, internet, cable TV and trash pickup.

The phase also includes converting a detached, 2,300-square-foot structure at the corner of Overbrook and Hermitage Road. Salomonsky had envisioned using that building as a restaurant, but he said it is now planned to serve as a leasing office for The Cooperage and the nearby Todd Lofts, a 100-unit warehouse conversion likewise managed by Salomonsky and White’s Main Street Realty.

Salomonsky said the state of the restaurant industry in Richmond, even before the coronavirus pandemic, factored into the change.

“Before COVID-19 hit, restaurants were struggling in Richmond because there was an over-supply of restaurants and diminishing sales per restaurant, so we were discouraged from pursuing a restaurant or a diner there because of that,” Salomonsky said.

“Now, with COVID-19 hitting us, it has absolutely no feasibility to creating another restaurant, so we retreated into turning it into a very attractive central leasing office,” he said.

The new section will include atrium-style courtyards similar to those in the completed section. The open-air courtyards are intended to provide more light to units within the structure, the south wall of which is windowless to keep the project eligible for historic preservation tax credits.

The development cost for the second phase is estimated at about $17.5 million, or $150,000 per apartment.

The western portion of the Cooperage building previously housed a showroom and storage for Commonwealth Business Furniture. The used office furniture business has since relocated to 3800 Deepwater Terminal Road.

I’d like to see the developers able to cut windows into the blank walls without losing the historic tax credits. Perhaps that could be incorporated into a requirement for truly affordable housing provided within the building?

I see Richmond is once more perpetuating the “Least Interesting Possible” school of architecture. For a city that touts creativity and the arts as driving forces, we sure don’t build like it.