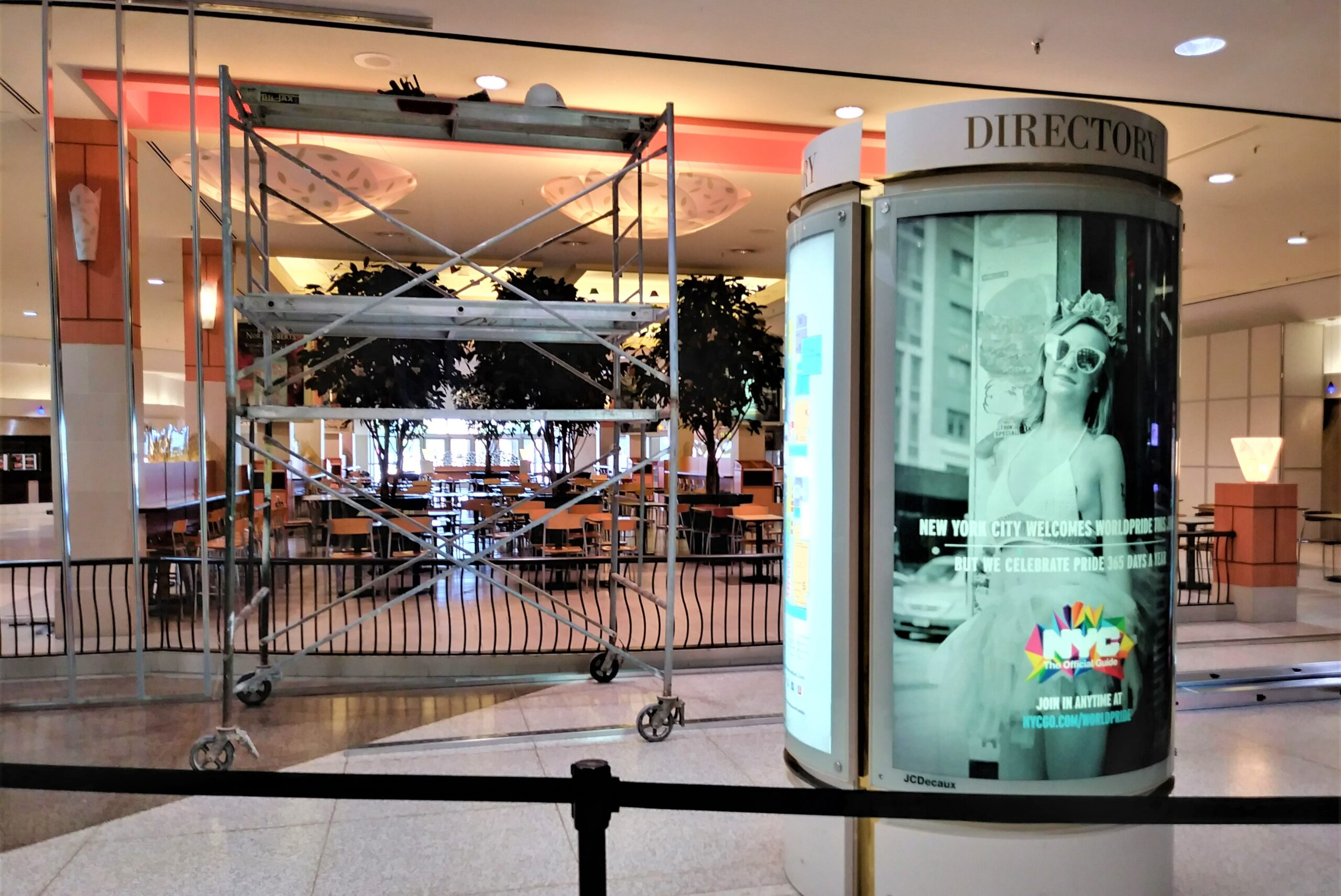 Regency is turning its food court into an outdoor plaza and food hall. The last food court tenants moved out in April and the area has been cordoned off for the upcoming construction. (Jack Jacobs photos)

As the first residential tenants move into Regency’s new section of apartments, owners of the ever-evolving western Henrico mall are turning their attention to the future of the nearby food court.

Regency owners Rebkee Co. and Thalhimer Realty Partners have cordoned off the mall’s food court in preparation for a renovation project that will replace the space with a new food hall and outdoor plaza.

The existing food court would be split about 50-50 between the outdoor plaza and the food hall, said Steve Bonniville, president of mall manager Broad Sky Management. The project would also include a new entrance and would serve to better connect the mall to the apartments, which sit just outside the food court.

“We’re constantly redeveloping things over here and this is the next phase of that with our apartments coming online fully,” Bonniville said. “We needed a better look and feel as we marry the mall to the apartments.”

The plan calls for a third-party operator to run the new food hall on behalf of the mall, but Bonniville said an operator hasn’t been selected yet.

Bonniville said the exact number of vendors that would be at the food hall is still in the works. He said the future operator would determine the types of businesses that would be found there. 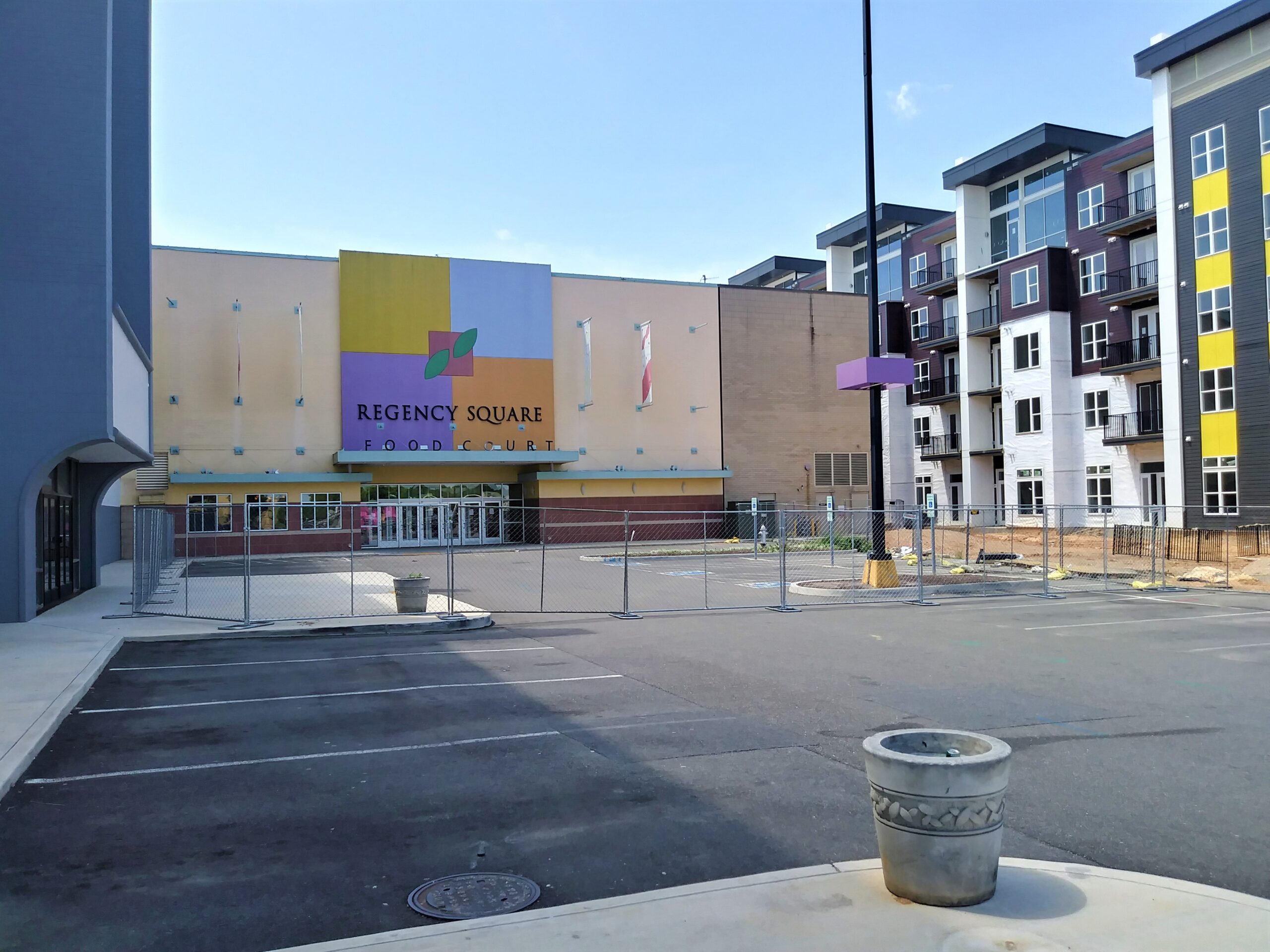 Regency’s latest effort in its transformation into a mixed-use development is a new food hall and outdoor plaza at the current location of the food court, which is near the mall’s new apartments.

The last of the legacy food court tenants moved out in late April. It was still being determined how many, if any, of the food operators would return to be part of the food hall, Bonniville said Monday.

There isn’t a timeline on when the project would be completed, and the final cost of the project hasn’t been determined yet, Bonniville said.

Residents of the mall’s 320-unit apartment complex — called the Rise at Regency — began to move into their apartments in mid-April.

The food court project is the latest piece of the ongoing effort to reimagine Regency as a mixed-use development. The mall has attracted new tenants like Surge Adventure Park and NOVA of Virginia Aquatics to fill the spaces of big retailers that formerly had a presence at the mall.

Other recent additions include an outpost of the Goddard School, a chain of early-education centers. The restaurant Sloop John B opened at Regency late last year.

The mall’s outparcels are also seeing a transformation. Sheetz is slated to open on the site of the building that was formerly home to Tire America by Sears.

An excellent idea! The local owners of Regency Square have shown how an aged mall can be successfully reinvented!

Will there be any new retail stores returning to Regency?

Really impressed with what the Regency operators are doing with the property. I had fully expected this place to become a source of urban blight that would be ultimately torn down and paved over. People are actually parked in the lot now. It was a ghost town a few years ago. JC Penny left too soon it seems.

Hmmmm…. given its location, I doubt it was a candidate for Urban Blight and redevelopment was likely a no-brainer.

Good idea on the food court. Sloop John B is a nice restaurant but we took our kids to Surge. The equipment is nice but they didn’t touch one thing in there to make it presentable inside. It’s too bad too, it could be a really nice park. I hope they put a little more money into it.

Still hoping for some green space at Regency with places to sit, walk, visit with a friend over coffee.