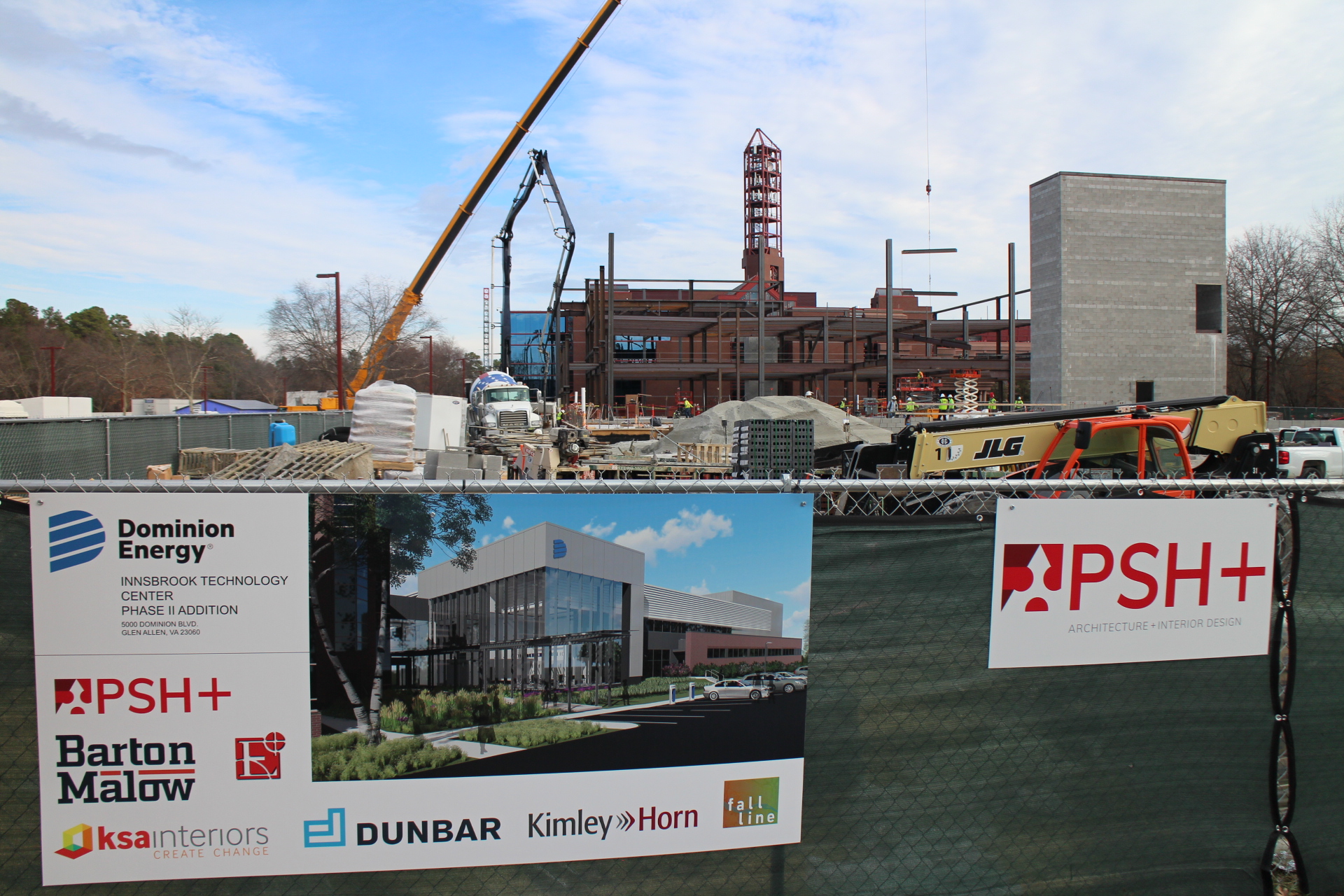 A sign shows what’s to come with the addition and renovation underway at Dominion Energy’s Innsbrook Technical Center. (Photos by Jonathan Spiers)

While a flood of infill apartment developments has been the main attraction in Innsbrook of late, perhaps the biggest project going on in the transforming Henrico business park is from one of its longtime anchor occupants.

Dominion Energy is about halfway through an 18-month, multi-phased renovation and addition of its Innsbrook Technical Center at 5000 Dominion Blvd.

Underway since last summer, the $100 million project has been largely hidden from view from Innsbrook’s main arterial roads but has come more into focus in recent months, with a tall crane and new construction peeking through and above the tree line encircling the roughly 50-acre campus in the heart of the park.

The project involves a two-story, 76,000-square-foot addition that will house a new electrical lab and main entrance for the existing 417,000-square-foot building, about 300,000 square feet of which also is being renovated. 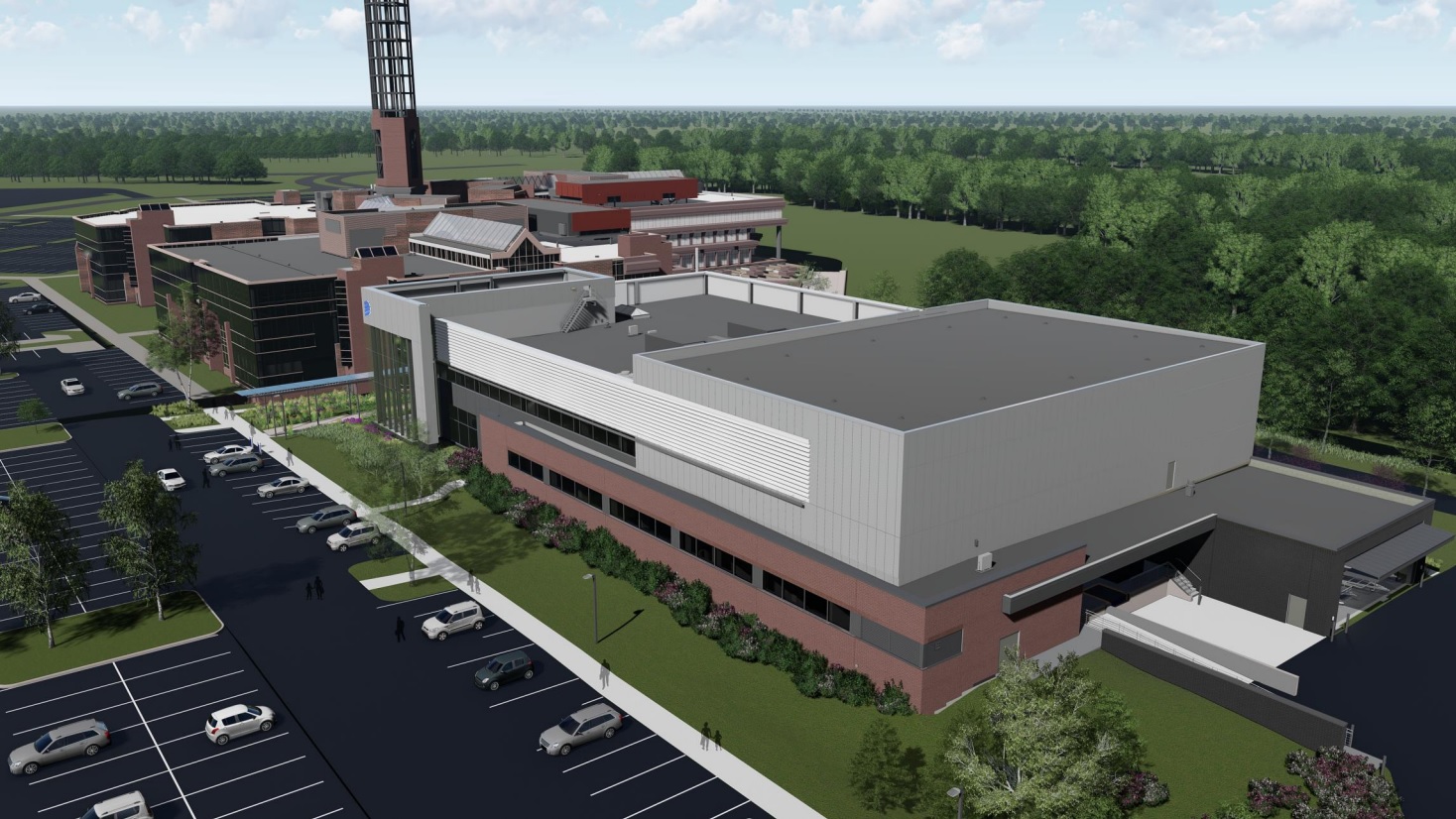 A rendering of the addition once completed. (Courtesy of PSH+)

The new lab will replace similar facilities currently housed at Dominion’s Grayland Avenue location, which the utility giant is looking to sell. About 350 employees at Grayland will be relocated to the expanded Innsbrook center, which is planned to accommodate a total of 1,200 employees when the project is completed by the end of this year.

The expanded center will bring Dominion’s electrical transmission and nuclear services teams under one roof, after they’ve been spread among multiple locations including Grayland and 600 Canal Place, Dominion’s 20-story tower in downtown Richmond.

“We’ve always wanted to try and get them under one roof,” said Scott Beckett, Dominion facilities director. “You can get more people in the space by using collaboration areas and tighter, smaller workstations. And with the natural light and what we’re doing with the windows, we’re just making the space really more attractive for the employees.”

While designed for the 21st century and with the pandemic in mind, the project in a way has been several decades in the making, as the greenfield site where the new construction is taking shape had been reserved for an addition back when the center was built in the late 1980s. 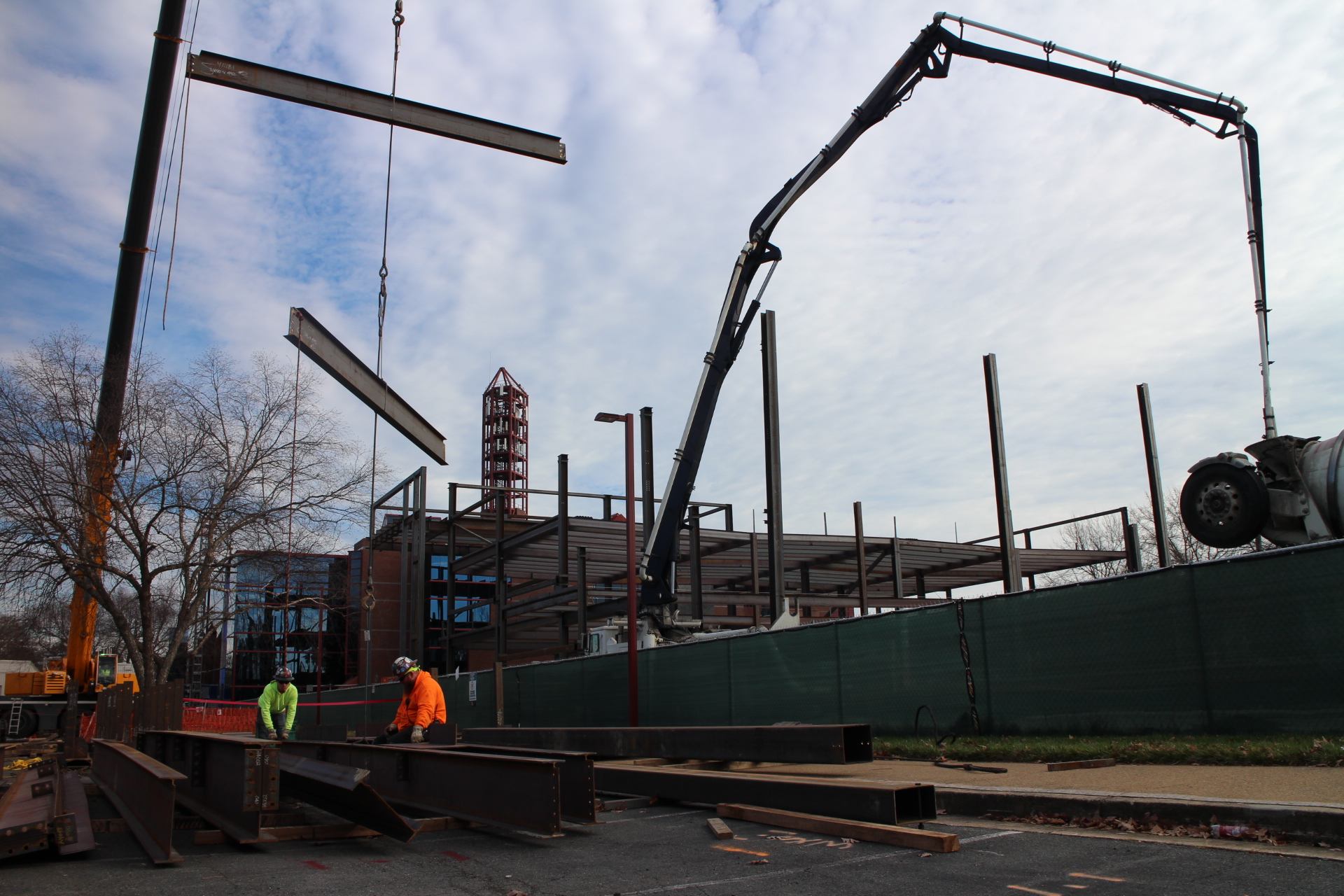 The dated main building resembles an ’80s-era mall, complete with multilevel escalators and pastel-colored interiors. That left designers with Richmond architecture firm PSH+, formerly Price Simpson Harvey, with the challenge of blending in the new addition and an updated interior.

“The original building, I call it Frank Lloyd Wright-meets-Mayan temple,” said Jeff Loinette, a PSH principal. “We took cues from the building in terms of materials – we have compatible bricks, compatible glass – but we certainly are using the materials in a modern, more aesthetic way.”

Added PSH co-founder Steve Harvey, “In some ways, the (600 Canal) tower provided a lot of aesthetic clues for sort of a new Dominion architectural branding standard. I don’t know if they would necessarily say that, but it will definitely have a more contemporary palette than the existing building.”

The renovated areas feature reconfigured floors with pandemic-minded workspaces, updated office layouts and increased natural light. Other upgrades include more energy-efficient HVAC systems, modern-day office features such as quiet rooms and mother’s nursing rooms, adjustable standup desks distanced from each other, and amenities including a gym and cafeteria.

Management offices that used to line the building’s walls have been moved inward, freeing up windows to allow more natural light for more employees to enjoy. Meeting rooms have been upgraded with video conferencing technology, and water fountains have been replaced with water bottle filling stations. 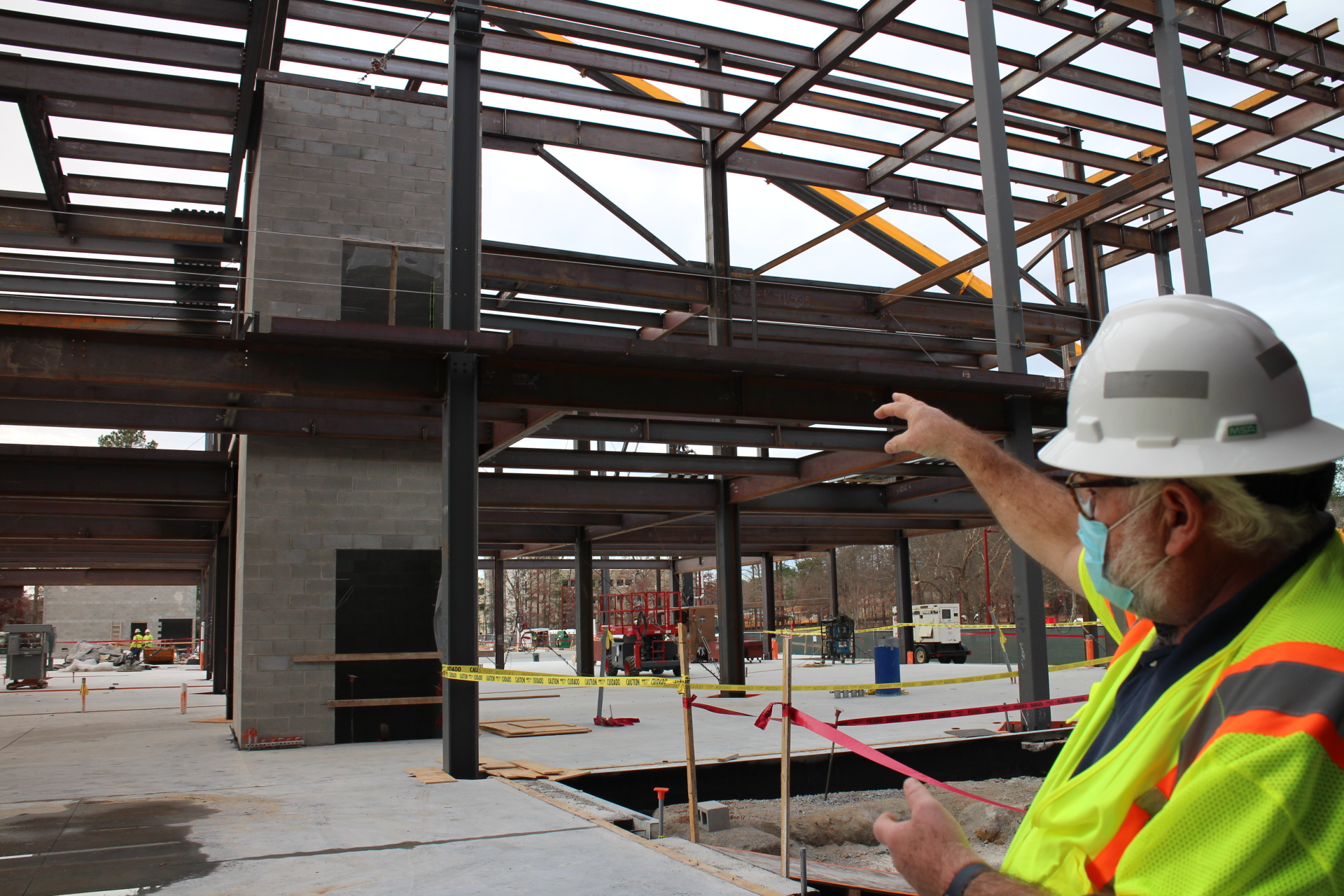 Dominion Senior Project Manager Lee Bobo points out where facilities will be housed in the addition.

“This was just a sea of high cubes in the way it started out in 1986, with this hung fluorescent lighting and everything,” said Lee Bobo, a senior project manager with Dominion. “In the renovation, it’s going to be all new mechanicals, all new electrical. The new glass is about 45 percent more efficient. When we’re said and done, the building is going to be a great story to talk about sustainability.”

Highlighting the completed east wing of the building is a multistory art feature that towers toward an atrium skylight, which was replaced along with the better-insulated windows. The building’s interior walls are also being updated with a new color scheme that’s aimed at helping employees and guests navigate the labyrinth-like complex.

“This building can be a bit of a maze with the ’80s mall feel, so we incorporated some color coding and we’ve got a marking on each wing and floor, just to help employees way find,” said Kyle Young, Dominion capital projects manager.

Old file cabinets, chairs and other equipment taken out are being sent for reuse at Dominion’s 41 district offices in Virginia and North Carolina, with extra equipment also being donated to area charities. 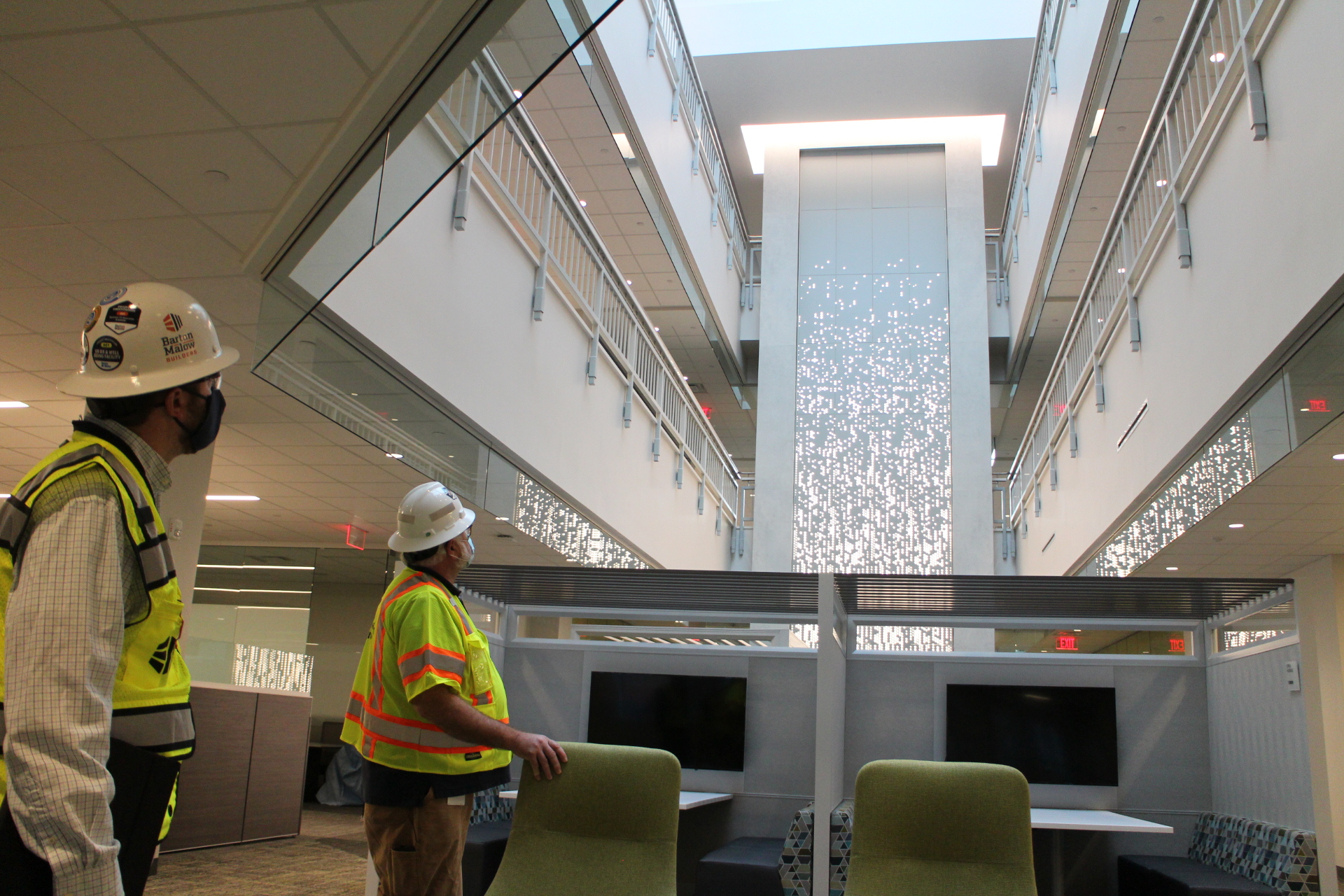 The renovated east wing is highlighted with a multistory art feature.

“The goal is to make sure that less than 5 percent of any waste ends up in a landfill,” Bobo said. “We did it on the first phase, and that’s what we’re working towards here.”

The new addition, on the center’s southwest side, will house the new electrical lab for simulating outages, along with a new storm center facility for coordinating responses to outages with Dominion’s System Operations Center, also located in Glen Allen at an undisclosed location.

The addition will also feature a new, reoriented main entrance for the building with a lobby, welcome center and guard desk. The building will also have a partial third-floor mezzanine and a garage and loading dock for various outage response vehicles and equipment.

“Everything that goes with maintaining the reliability of delivering electricity via transmission is going to be out of this building,” Bobo said. 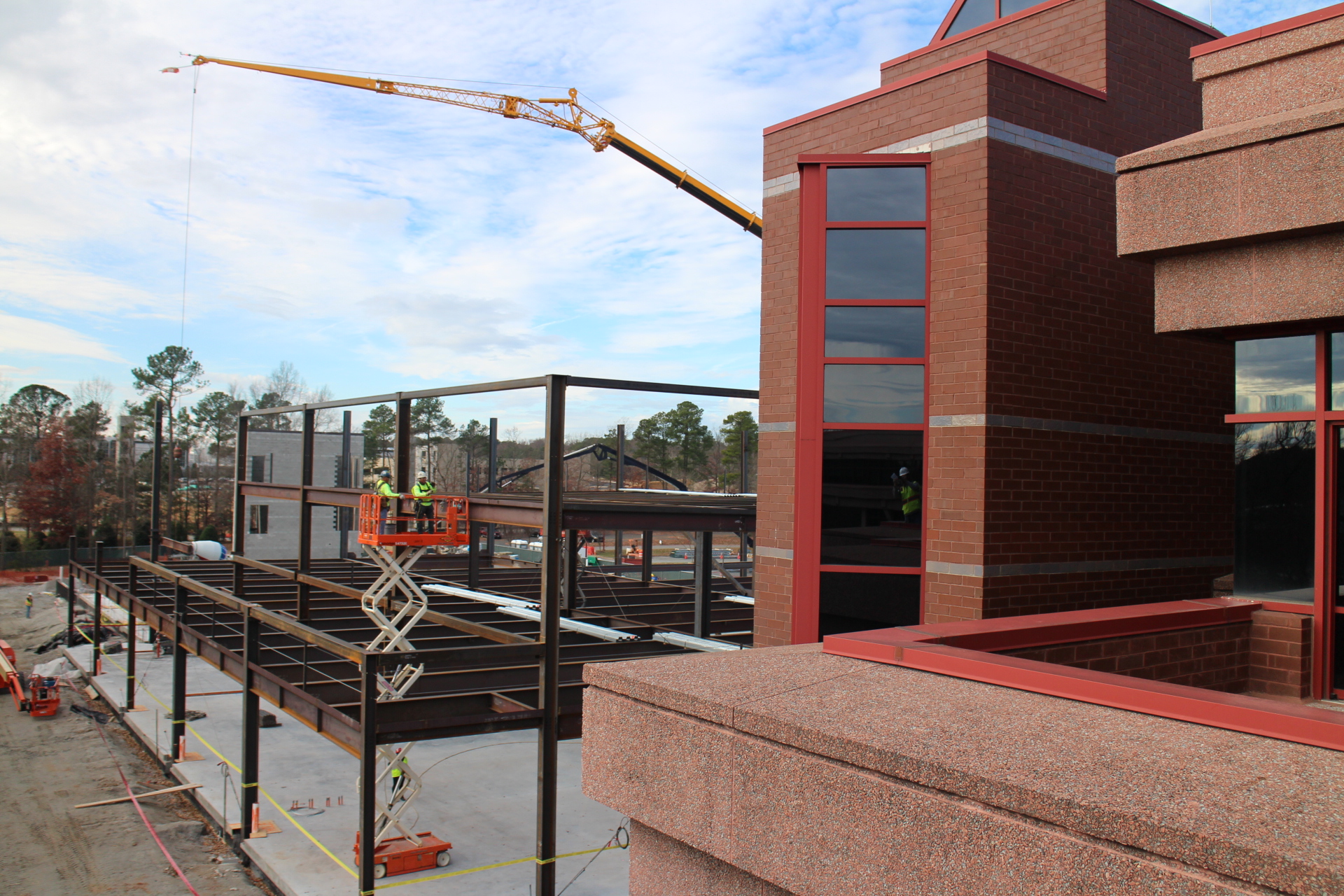 The two-story addition will connect to the existing structure and include a new main entrance.

The project is in the midst of its second phase, which Dominion and project contractor Barton Malow marked with a topping-out ceremony in late January, signaling the construction of the addition’s highest point. The work has been coordinated so as not to disrupt the center’s day-to-day operations.

Years in development, the project started with smaller enhancements to the building with involvement from PSH+ and Hourigan, the contractor behind the 600 Canal tower. While that tower was being built, the Innsbrook project was put on hold and later rebid out, with Barton Malow winning the bid to work with PSH.

Willie Harris, Barton Malow’s project manager for the Innsbrook job, said the Michigan-based firm that has an office in Richmond previously worked with Dominion on its North Anna Nuclear Plant and also built its Lexington district office.

PSH’s Harvey said the project ranks among the biggest ever tackled by the 24-person firm. 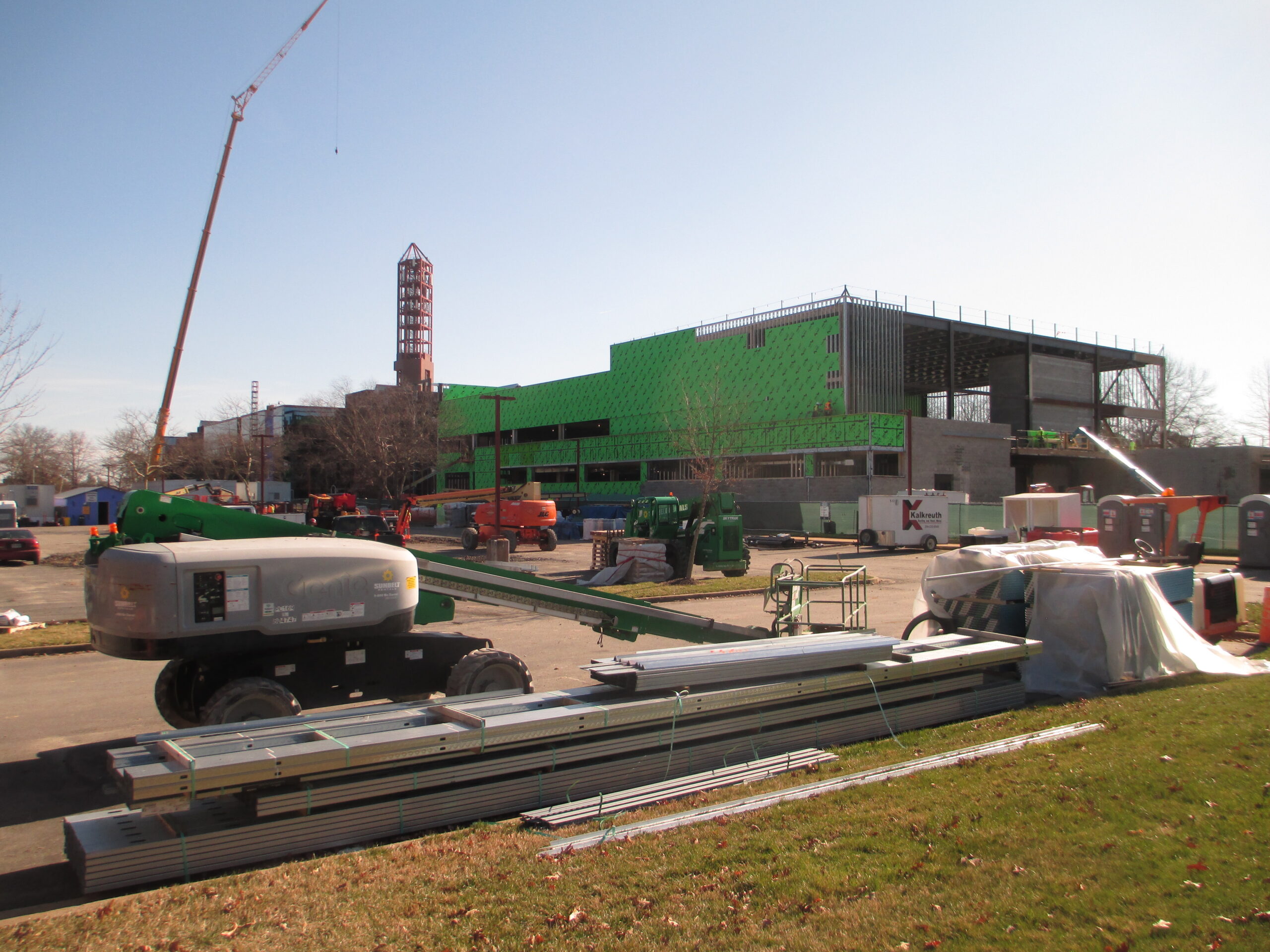 The new construction fills a greenfield site long planned for an addition to the building.

“This is a big deal for us. It’s going to be a three-year-plus engagement. For a firm our size, that’s unusual,” Harvey said. “It’s got multiple phases, it evolves and changes every day, so we’re having to roll with the punches. But it’s been a great ride.”

Other firms involved in the project include KSA Interiors and landscape architecture firm Fall Line. Dunbar is the structural engineer, Kimley-Horn is handling civil and Engineers Plus is the mechanical, electrical and plumbing engineer.

As the project plays out, new neighbors are on their way in the form of 305 apartments and 58 for-sale townhomes that are being developed on 12 acres adjacent to and once part of the Dominion property. The company sold that land last year to Dominion Realty Partners, which is developing the residential units. Despite the shared “Dominion” name, the two companies are unrelated.

To the south of the site, Robinson Development Group is progressing on its Metropolis at Innsbrook, a 700-unit apartment complex planned to include 13,000 square feet of commercial and amenity space.

Meanwhile, in addition to its Grayland listing, Dominion Energy is reassessing some of its other real estate holdings in the region, last month issuing a request for proposals for the vacant 2-acre site at 701 E. Cary St., where it had planned to build a sister tower to 600 Canal.

Great to see all that money I pay for electricity and the lobbying paid for by Dominion at work. Love the water feature that just screams disposable wealth!

Is there any word on the redevelopment plans for the Dominion site on Grayland and Robinson in the Fan District? That award should have been made months ago. Has there been no application to the City yet?