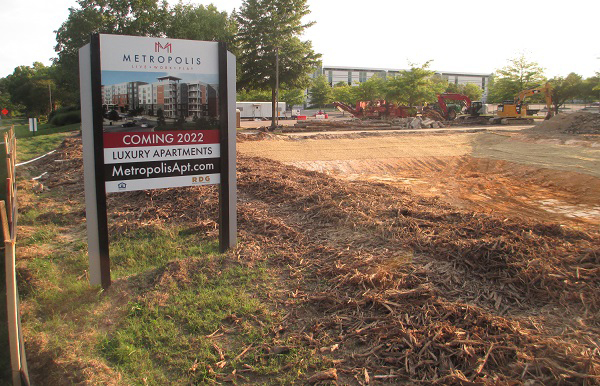 The first phase of a massive mixed-use development that’s set to add hundreds of apartments in Innsbrook is getting underway.

Robinson Development Group is starting work on Metropolis at Innsbrook, the first part of a two-phased project that’s planned to fill a 14-acre site between Dominion Boulevard and Sadler Road, just north of the Wells Fargo campus off Innslake Drive.

The initial phase will consist of two apartment buildings and a parking garage on an 8-acre lot fronting Dominion Boulevard. The two buildings will total 402 units, with sizes ranging from 450-square-foot studios to three-bedroom floorplans totaling 1,200 square feet. Monthly rents have not been set.

The phase is estimated to cost $83 million and take two years to complete, with the first units delivered in 18 months. A schedule for the second phase has yet to be determined, said Hal Yuill, Robinson’s vice president of investments and acquisitions.

The 8-acre lot was recently subdivided from the larger parcel that Robinson purchased last year from Wells Fargo. The company had paid $7.4 million for the 14-acre parcel, and sold the 8-acre portion for $8.44 million in a deal that closed June 9. 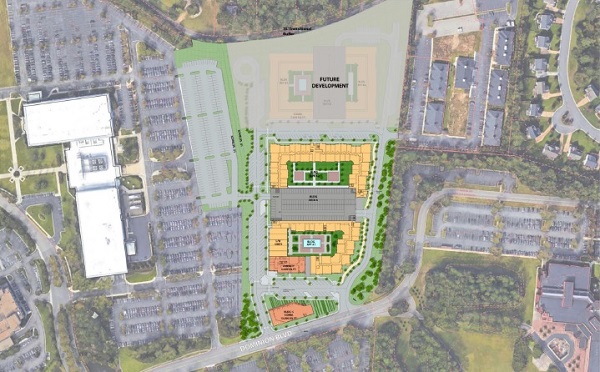 A site plan shows the layout for the Metropolis at Innsbrook project’s first and second phases. (Images courtesy of Colliers International)

Yuill said the lot was sold to a joint venture consisting of principals with Robinson and other new investors. Henrico property records list the buyer as Innsbrook Apartments I LLC, which lists Robinson’s Norfolk address as its office.

Yuill said the larger parcel, at 4359 Sadler Road, was broken up into three lots per a subdivision plat recorded with the county. Robinson retains ownership of the other two lots.

The commercial and amenity portion of the project, to be built in the second phase, will fill a smaller lot fronting Dominion Boulevard, with an address of 4400 Dominion Blvd. The smaller lot will initially be used as a construction retention pond.

The rest of the second-phase land has not been assigned an address and will be accessed via the first-phase site. Yuill said access to the site will be from Dominion Boulevard, with no access from Sadler Road.

The apartments will be housed in four- and five-story buildings surrounded by parking decks with direct floor access for residents. Community amenities are planned to include two courtyards, a pool, a fitness center and a rooftop social area. Six street-level units will be designed as “live-work” spaces.

Peter Vick and Harrison Hall with Colliers International are handling leasing for the commercial space. 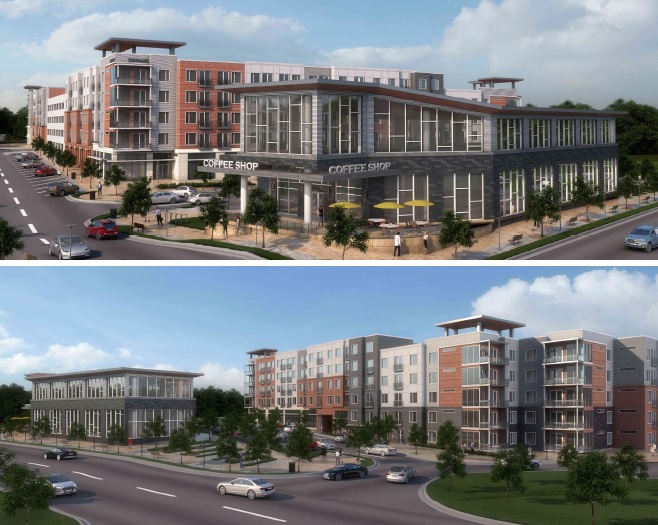 Renderings show how the Metropolis at Innsbrook buildings will appear once constructed.

KBS is the contractor on the project, and Saunders + Crouse Architects is the designer. Townes Site Engineering is the civil engineer.

Metropolis at Innsbrook is getting underway just as other developers are moving forward with their own infill projects in the transitioning office park.

Just south of Robinson’s site, at Dominion Boulevard and Innslake Drive, WAM Associates LLC, led by Joe Marchetti Jr., and Richmond-based WVS Cos., is finishing up their 220-unit Innslake Place.

To the north, Dominion Realty Partners is looking to develop a mix of apartments and for-sale townhomes totaling 360 units at 5000 Dominion Blvd., beside Dominion Energy’s Innsbrook operations center.

And Lingerfelt CommonWealth Partners, headquartered in Innsbrook, recently filed plans with the county for a series of infill projects that would add nearly 1,400 apartments in coming years.

The final development of Innsbrook has begun nearly 40 years after its conversion from a gravel and sand pit into an office park, now converting an office park into a mixed use residential community. I like that Robinson is hiding its parking garage behind the residential buildings in the so-called donut concept. What’s coming in Innsbrook is the sharing of parking lots between commercial and residential uses which we’ll see developed more so in the Lingerfelt and Highwoods properties than in the Robinson and DPR properties, as well as when the retail component is redeveloped on West Broad Street. I’d… Read more »

Very good point. I agree – you never want to see a community, be it a city, suburb, etc., development be considered ‘final’ – always strive for more.

Hey Bruce;
I had always head Innsbrook was a golf course at one point, was that ever the case of was that just a myth?

It hasn’t been a golf course in the last 60 years or so that I know of. I think people are getting confused. There was a par 3 course (that had 4 par 4’s in it) across the street and down the hill where the old Circuit City Headquarters was. It was a cool little facility that at one time had the front nine lit up so you could play at night. Interestingly the Pro shop also sold and rented ski equipment, always thought that was a weird combination.

thanks for the info!

Gravel and sand pit? Do you have any pictures of that?

That would be pretty cool to see!

Henrico County is headed in the wrong direction. Too. Many. Apartments. Board of Supervisors claims that mixed-use will not attract families with school aged children. Really? Anywhere there is safe, convenient housing will attract families with school-aged children. Where will the children go to school? The majority of the schools are at capacity as it is. This development is in addition to the units at Regency, which I’m all for because that area needs revitalization badly, but they would not restrict even a potion of it to 55+. Not to mention the TRAFFIC.

There really is not much room for anything else in that part of Henrico other than apartments, condos, townhomes, or just dense development in general. Without residential Innsbrook has been on its way to needing revitalization too. Straight office parks of that size are a thing of the past.

I’m in Innsbrook now, parking lots are at 10% of capacity.

So let’s just cram families in there first and figure out schools and libraries later? It’s a shame.

What makes you think they don’t have a plan to handle it. Have you looked at their school building schedule? Henrico has typically been pretty good about covering these things. Especially schools. You don’t usually see anywhere near the number of trailers that you do in other localities, and when you do they are typically temporary to cover a gap versus a permanent solution. As for libraries. Do you really think with the amazing libraries like the Libbie Mill location that Henrico would let that slip? I am sure their library system can handle this growth until they can get… Read more »

These apartments are going to be so small and have no yards or personal space. No way someone would want to live there with a family. Not a place kids should be brought up. These are going to be the future slums of the West End.

This comment is posted as my opinion. It will most likely not be well received by certain entities. As a frequent user of Cox Rd, I enjoy the open spaces, the architectural components, the landscaping, and the moderate traffic. Under projected constructions those things will no longer be available to view, and the traffic will be Broad Street rush hour redux. Nearby neighborhoods will become traffic outlets and the 25mph speed limits will be in large part ignored, as they occasionally are now. Then there is the almost totally characterless architecture. Digitally modern to the extreme, they appear as featureless… Read more »

I imagine these are going to be super small, super expensive apartments. I don’t know why anyone would want to live in these. Single family lots are the way to go. Forget all this density.

A continued opinion. The UMU or Urban Mixed Use designation brings up a question. It is said that UMU is good for businesses and people because employees can live, work, shop, and dine out in the same area. Supposedly that means easier commutes and more amenities. However, from what I have seen, the prices of such units are pretty much in the upper tier of the market. So, my question is: given the average salary levels of many office employees compared to the price of UMU housing, how will they afford to rent or buy the units? Most cannot without… Read more »