A 13,000-square-foot commercial building is proposed for a massive mixed-use development in Innsbrook. (Saunders+Crouse Architects)

A developer from Hampton Roads is looking to pile on more residential density in Innsbrook.

Robinson Development Group has submitted plans to construct up to 700 apartments and nearly 28,000 square feet of commercial and amenity space on a 13-acre tract owned by Wells Fargo at 4359 Sadler Road.

The proposed site is a mix of undeveloped property and a large surface parking lot along Dominion Boulevard that sits on the Wells Fargo campus, according to preliminary plans filed with Henrico’s planning division.

The banking giant owns 52 adjacent acres in all, anchored by its offices at 4340 Innslake Drive, bounded by Dominion Boulevard to the east, Sadler Road to the west and a small roadway leading into the Dominion Place Office Park to the north.

Plans did not indicate whether the development would occur in phases or be constructed all at once, or if Robinson Development is under contract to purchase the site.

Tom Robinson, Robinson Development Group president and director of development, did not return an email or calls for comment Friday afternoon.

The bulk of the proposed development area most recently was assessed for about $2.9 million, according to county records.

Up to 700 apartments are proposed to rise on a 13.3-acre parcel next to Wells Fargo’s Innsbrook campus at 4359 Sadler Road. (Saunders+Crouse Architects)

Preliminary plans call for a series of L-shaped four- and five-story apartment buildings to rise on the property, along with a two-story, 13,000-square-foot commercial building at the entry to the development along Dominion Boulevard.

One of the apartment sections would consist of two four-story, L-shaped apartment buildings wrapped around a central parking deck of 279 spaces, with two courtyard areas on either side, according to submitted plans. They would house 272 apartments, with a mix of 126 studio units, 78 one-bedroom and 68 two-bedroom units, along with a 7,000-square-foot ground-floor space at the southeast corner for commercial/amenity uses.

The second residential section would be a similarly shaped but larger complex of two five-story L-shaped apartment buildings connected by a 440-space parking deck with an outdoor pool and courtyard areas. That section would house 428 apartments, including 184 studio units, 111 one-bedroom, 116 two-bedroom, 10 three-bedroom and seven “live-work” units. An 8,000-square-foot ground-floor commercial/amenity unit also is planned for the southeast corner of that building.

Much of the development would have two entry points: Dominion Boulevard and the access road to the Dominion Place Office Park to the north, the plans indicated.

A 35-foot buffer between the development and Sadler Road is proposed, with no vehicle access to that roadway and the Wells Fargo campus next door.

Wells Fargo is working with Hirschler’s James Theobald to have the site rezoned from office to urban mixed-use district, which allows for a mix of residential and commercial uses. The group also is seeking a provisional use permit that supports a variety of uses for commercial development, such as drive-thru windows for banks or coffee shops, and outdoor vending area for permitted special events or markets.

Members of the Henrico Planning Commission deferred action on both the rezoning and PUP during its Sept. 12 meeting. It may take up both matters during its Oct. 10 meeting.

Robinson Development’s plans for the 13.3-acre site add to the area’s continued development and growth under the county’s UMU zoning designation. 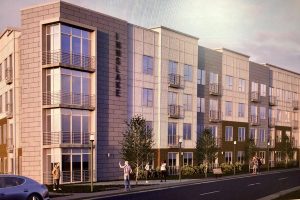 A rendering of the second phase of Innslake Place. (Courtesy Henrico County)

Construction is underway on a 100-unit, five-story apartment building at 4235 Innslake Place near the Innsbrook Drive and Dominion Boulevard intersection by a development group led by Joe Marchetti Jr. and Richmond-based WVS Cos. A second four-story, 123-unit building as part of the development’s second phase is pending.

Just south of Innsbrook, father-son duo Steve and Jack Middleton of Richmond-based Commonwealth Properties LLC are finalizing plans with Henrico for another apartment development on a 5.4-acre tract at 3500 Cox Road.

Jack Middleton said the project, which was rezoned UMU and approved for up to 407 apartments in seven stories in June 2018, is still on track for a spring 2020 groundbreaking.

Why not? What’s a few more cars on the road?

If we keep pushing housing further and further out then there will be more cars on the road for longer distances, but if we concentrate development then we can start providing things like public transportation where people will not need as many cars or at least not make as many car trips. Low density sprawl will always lead to more traffic.

Definitely. It’s incredibly hard to make transit work in sprawl! Creating hubs like this could also provide the density to extend the Pulse deeper into Henrico.

I would like to see higher density housing developed in conjunction with crosswalks, sidewalks and bike lanes. So many existing developments off West Broad street have few options to connect to other areas or cross at major intersections. Some are marketed as “walkable lifestyle” properties, but the sidewalk often ends at the edge of the developer’s parcel. I think people will take advantage of alternative modes if there is a safe way to do so. Data from the county supports the conclusion that this is a growing problem: https://henrico.us/news/2019/06/vehicle-crashes-with-pedestrians-bicyclists-on-the-rise/

The good news is that Innsbrook has a network of walking and biking paths that connect most, if not all of the sites. Those paths have been maintained through these new projects due to the easements that Innsbrook wisely retained when the properties were originally developed.

The intent is to have more housing near the offices with the hope to reduce the need to drive.
Having separated areas of zoning forces everyone to drive everywhere, generating greater traffic, so this is the right step to address that.