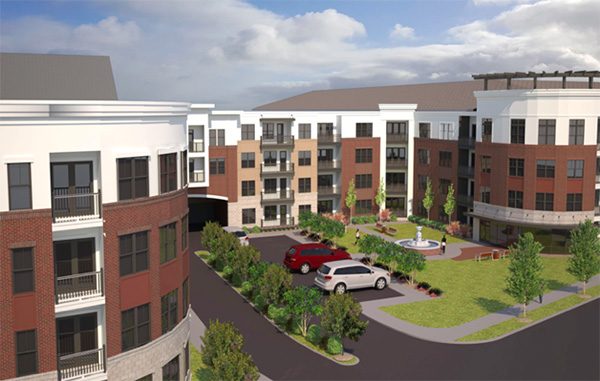 A father-son duo is looking to move forward with a sizable apartment project just south of Innsbrook after getting the green light this week from Henrico County.

Steve and Jack Middleton of Richmond-based Commonwealth Properties LLC on Tuesday were granted approval by the Henrico County Board of Supervisors to rezone a 5.4-acre tract at 3500 Cox Road from office use to the county’s urban mixed-use zoning.

While the designation allows the firm to construct up to 407 apartments in a structure that may rise up to 85 feet, Jack Middleton said he and his father are still in the planning stages.

“We’re looking at several options for the site,” Middleton said. “That includes the project being at least four stories with interior corridors. We don’t have any plans to reach the maximum density allowed on the site.”

Construction is slated to begin in 2020, said Steve Middleton, the company’s president. They did not disclose a cost estimate for the project.

Mostly woods and overgrown brush, the parcel is cut from the former WestMark office campus, now the SunTrust Center, west of Cox Road and butting up against Interstate 64.

Commonwealth Properties paid $1.7 million for the site last September, purchasing it from RER/New Boston West Broad LLC, which had owned the WestMark campus before selling it off to Atlanta-based Bridge Investment Group for $45 million. It also sold a 2.4-acre surface parking lot in August 2017 for $5 million to Drury Hotel for the construction of its first metro Richmond hotel at 11049 W. Broad St.

Commonwealth Properties has constructed several multifamily projects across the Carolinas and metro Richmond, including the Avia Apartment Homes in the Broad Hill Centre development in Short Pump.

As the Middletons continue to mull the design and unit count for its Cox Road project, Jack said conceptual plans for the community will include amenities similar to its Short Pump project, including a pool, gym and outdoor courtyard space.

With millions of square feet of office space and copious surface parking, county planners have tagged the areas in and around Innsbrook for accelerated residential density.

In June 2016, county planners created an Innsbrook overlay district that altered its existing code to allow the urban mixed-use zoning on parcels with at least 4 acres. Previously, the zoning designation was restricted to parcels 20 acres or larger.

Jack Middleton said Commonwealth Properties is scouting other opportunities for similar developments in the area.

“Innsbrook is a huge economic driver for Henrico County,” he said. “Innsbrook presents cool opportunities for residential development, and it’s an area that we are very interested in for future growth.”

Thats a great site that I pitched to deaf ears many times over the years. The Middletons are excellent builders and managers and will do the site justice.