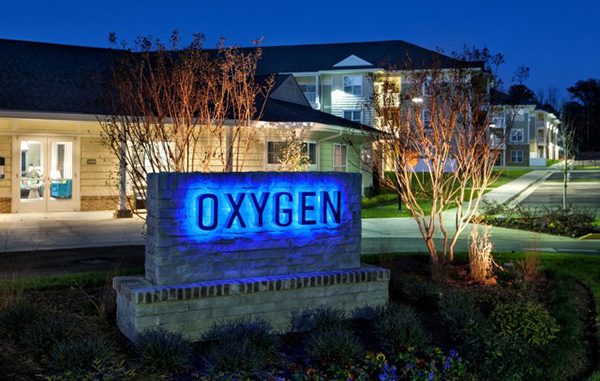 Oxygen at Centerpointe in Midlothian sold Nov. 22 for $46 million. (CBRE)

Correction: This article has been updated to correct the buyer of Oxygen at Centerpointe. An earlier version named another company that shares the same office address. CBRE represented the seller, not the buyer as previously reported.

Three apartment deals totaling more than $115 million closed out 2017 with a bang in Chesterfield County.

Priciest among them was Oxygen at Centerpointe, a 255-unit complex along Charter Colony Parkway in Midlothian that sold Nov. 22 for $45.83 million.

The seller was represented in the transaction by CBRE’s multifamily team out of its Richmond, Norfolk and Washington, D.C. offices. CBRE | Richmond’s Charles Wentworth and Peyton Cox worked the deal locally.

Wentworth said the 18-acre property received strong responses from investors. He said the purchase price represents the highest price per unit for a suburban garden-style apartment development in the Richmond market to date.

Built in 2014, Oxygen is one of the newer apartment developments in Chesterfield, where multifamily growth has slowed in recent years due to the county’s proffer policy, which it recently revised.

“Chesterfield County specifically has seen a limited number of new development opportunities in the last 10 or so years because of the proffer situation,” Wentworth said. “(The county has) very strong demand, very strong apartment fundamentals and demographics.

“All those things attracted (PAC) both to the market and to the property. It establishes a strong foothold for them in the market.”

Oxygen opened in early 2016, about two-and-a-half years after Robinson announced plans for the $30 million project. KBS constructed the complex, which was designed by Cox, Kliewer & Co. of Virginia Beach. The property is part of the 700-acre CenterPointe mixed-use development by Riverstone Properties, the real estate arm of Bill Goodwin’s Riverstone Group.

Totaling 347,500 square feet of finished space, Oxygen includes one-, two- and three-bedroom units ranging from 860 to 1,500 square feet. The complex includes a salt water pool with clubhouse, business and fitness centers and a dog park.

Wentworth said PAC is planning minor improvements to the property. He declined to elaborate.

Nearly as pricy of a deal was the $42 million purchase of Hunter’s Chase apartments, a 13-building, 320-unit complex on 25 acres at Hull Street Road and Commonwealth Centre Parkway, across Hull Street from Brandermill.

The buyer was Hamilton Zanze, a San Franciso-based multifamily investment firm that closed on the property Dec. 15. It acquired the property from Aimco, a Denver-based REIT. County property records list the seller as Brandermill-Oxford LP.

Built in 1986, Hunter’s Chase includes one-, two- and three-bedroom units ranging from 650 to 1,100 square feet. Monthly rents range from $900 to $1,360, and occupancy was at 98 percent at the time of the transaction. The property totals just over 260,000 square feet of rentable space across 13 three-floor buildings.

Hamilton Zanze plans to invest $6.08 million in capital improvements to the property including interior renovations of all units, enhancements to the clubhouse, pool and fitness center, and a conversion of a tennis court into a multi-sport court.

Rounding out the trio of apartment deals is Colonial Ridge and The Glen at Colonial Heights, two neighboring complexes along Jefferson Davis Highway north of Colonial Heights that sold together Dec. 26 for $28.2 million.

The buyer was Preservation Partners, a California-based firm that is working with the Colonial Heights Economic Development Authority to acquire and renovate the 192-unit Colonial Ridge and 100-unit Glen at Colonial Heights.

Preservation Partners is using tax-exempt revenue bonds issued by the EDA to fund work on the two properties, both of which consist of income-based housing, according to a Times-Dispatch report in October.

Note: This story has been updated to include information from Hamilton Zanze received after deadline. A subsequent update was made to clarify the Colonial Ridge purchase by Preservation Partners included The Glen at Colonial Heights property.

Now that the proffer rules have been relaxed in Chesterfield, a lot of new more upscale product will be coming to the market. Competition will stiffen. The winter field is coming out of the ground as is HHH’s new community in Centerpointe. Watch out for Westchester and Commonwealth Centre to break the beezeway mold with design innovation.