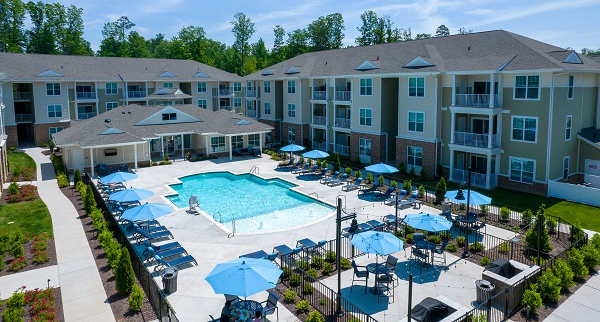 The Sapphire at CenterPointe apartments were completed in 2020. (Courtesy of Capital Square)

Nearly four years after its slightly larger neighbor changed hands in a $45 million deal, a recently built apartment complex in Midlothian has sold to a local buyer for a few million more.

Henrico-based Capital Square, through its Capital Square Apartment REIT, purchased the 192-unit Sapphire at CenterPointe on Charter Colony Parkway for $48.3 million. The deal closed May 20, according to the Chesterfield County assessor’s office.

The seller was Robinson Development Group, a Norfolk-based firm that completed the 11-acre complex last year after starting construction in fall 2019.

Robinson is also developed the neighboring Oxygen at CenterPointe, a 255-unit complex that sold in late 2017 for $45.8 million. The buyer in that deal was Preferred Apartment Communities, a REIT based in Atlanta.

The purchase appears to be the first for Capital Square under this real estate investment trust, which it formed in November 2020. SEC filings from April show the REIT sought to raise $160 million from investors.

Founded in 2012, Capital Square is known more for its so-called 1031 exchanges, through which investors can defer payments of capital gains taxes from one investment property to another.

Such deals could soon be on the chopping block, as a proposal to help fund President Joe Biden’s $1.8 trillion American Families Plan would eliminate capital gains tax breaks involving transactions with profits above $500,000.

Capital Square announced the Sapphire purchase in a release distributed Thursday. It quoted CEO Louis Rogers as saying the property’s lease-up was a draw. The one-, two- and three-bedroom units, averaging 1,100 square feet in size, are 97 percent leased, according to the announcement.

Attempts to reach Rogers for comment were unsuccessful Thursday. 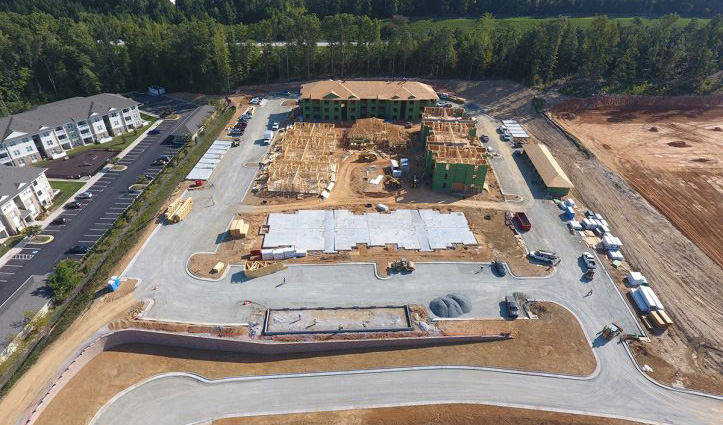 Located at 14250 Sapphire Park Lane, the apartments are just east of the Oxygen property. Sapphire sits across Charter Colony Parkway from the site of another apartment complex under development: the 347-unit Luxe 360, from Midwest-based developer Edward Rose & Sons.

Monthly rents at Sapphire were initially set from $1,190 for one-bedroom units to $1,760 for three-bedrooms.

Community amenities include a saltwater pool and sundeck, a clubhouse with a kitchen, a fitness center, pocket parks, a dog park, individual detached garages and electric car charging stations.

Capital Square said the purchase was made with a 10-year acquisition loan through Maryland-based Walker & Dunlop. Colliers had the listing, with local agents Charles Wentworth and Garrison Gore on the marketing team.

Sapphire at CenterPointe continues a string of apartment deals that Capital Square has made in recent months.

In April, Capital Square unloaded the 268-unit Maple Springs Apartments for $34.8 million. The company also has started development on its three-building Scott’s Collection project in Scott’s Addition, where it’s also planning a possible food hall at a building it has under contract.

The second phase of brownstone-style townhomes will fill a site on Brandermill Parkway across from the CenterPointe Crossing neighborhood, said Chris Corrada, a principal with Bill Goodwin’s Riverstone Properties. A builder for the project has yet to be selected.

Riverstone, the developer behind the 700-acre CenterPointe along Route 288 northwest of Powhite Parkway, also is starting work on a two-building retail development at Brandermill and Charter Colony parkways. Corrada said the buildings will house six tenants and include a preschool, which he said he could not yet name.

The Cities and Counties of America should unite to combat the Presidents plan to eliminate the capital gains tax deferment. It’s been the biggest single driver of assessment increases across the board in real estate, pushing values higher and “cap rates” lower for the last 20 years, ignoring even occasional interest rate increases. The demand for the deferment opportunity is the big pusher as shown by Cap Square 1031’s appetite and competitive spirit in paying the highest prices. The higher assessments feed the local government’s requirement to fund schools, social services, mental health programs and better police training, as well… Read more »