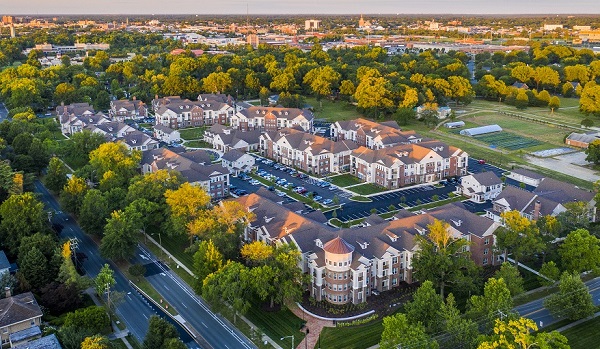 The Canopy at Ginter Park apartments in Richmond’s Northside. (Courtesy of Colliers)

In their second such deal in as many years, a local real estate firm has picked up a Tennessee-based builder’s latest apartment development in the Richmond market.

Bristol Development Group sold its 301-unit Canopy at Ginter Park apartments for $83.75 million to Capital Square, the Innsbrook-based firm that just over a year ago bought Bristol’s 2000 West Creek apartments in Goochland County.

The Canopy sale closed Dec. 30, with Colliers’ Mid-Atlantic Multifamily Advisory Group brokering the deal. The sale price amounts to $278,239 per door, and represents a nearly $29 million windfall for Bristol, which finished the complex last spring at a cost of $55 million.

The latest city assessment valued the 15-acre property, at Brook Road and Westwood Avenue in Richmond’s Northside, at $45.6 million.

Capital Square’s offer won out over about a dozen others received since Colliers started marketing the property for sale last fall.

David Hanchrow, Bristol’s chief investment officer, said that was in large part due to their previous experience with 2000 West Creek, which Capital Square purchased in 2019 for $103 million — the biggest multifamily property sale in the region that year, and an eight-figure flip for Bristol.

“There were a number of offers that we got, and we narrowed it down to the best three or four. The numbers were all very closely packed. But at the end of the day, the fact that they had closed on 2000 West Creek with us just the year before — they know the market, they know so much about the product that we build, and they came with the best deal,” Hanchrow said.

“You like doing repeat business with people that you know will perform and you can trust, and they did everything they said they were going to do,” he said. “We really like doing deals with them. They bought 2000 West Creek, they bought Canopy, and I think they’ll likely be a player for other things that we do in Richmond.”

Whitson Huffman, chief strategy and investment officer for Capital Square, said the company saw Canopy as a strong investment regardless, but that their history with Bristol added security to the deal.

“We absolutely love the type of properties they build. It’s a best-in-class community in one of our favorite places to invest in, so for us it was an absolute no-brainer,” Huffman said.

“The property speaks for itself; it’s in a great location, it obviously serves a very wide variety of people. But there is an additional layer of comfort in working with Bristol,” he said. “You know the property’s going to be well-built, and you know that it’s going to be a very smooth transaction process.”

Huffman said Capital Square isn’t planning any changes to the property, which he said would be a stable asset and provide consistent cash flow for the company’s investors.

“It’s got everything you could want from an amenity perspective, so we don’t need to do anything,” Huffman said. “We don’t really need to do any heavy-lifting; Bristol did that when they built it.”

Hanchrow said Bristol decided to sell the property in light of market demand and its lease-up rate, which, according to Colliers, averaged 14 units a month since completion last spring. Hanchrow said the property was 92 percent leased at closing, with units that range from 650 to 1,700 square feet in size renting at about $1,640 per month on average.

“We felt like it was a good time to take it to market, and the response from the investment community was very strong,” Hanchrow said. “We were able to achieve a number that made all of our investors very happy.” 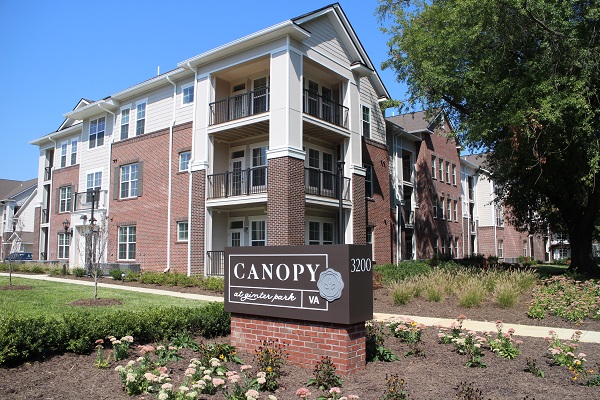 The Brook Road entrance to the Canopy at Ginter Park apartments. (BizSense file)

Site work got underway in 2017, with Bristol enlisted for the project by Union Presbyterian Seminary, which owned the land and is located nearby.

The project generated opposition from neighbors who challenged it with two lawsuits. While the legal challenges prolonged the project’s schedule, Hanchrow said Bristol was pleased with how Canopy turned out.

“It was eight years in the making, and I think we knew all along that it was going to be a nice deal and an asset to the neighborhood and it would be successful to our investors, and all of that came true,” he said.

Working the deal locally were Charles Wentworth and Garrison Gore of Colliers’ Richmond office. Other team members included Will Mathews in Atlanta, Clay Ellis in D.C., and Hank Hankins and Victoria Pickett in Norfolk.

With Canopy off its hands, Bristol’s attention in Richmond is now focused on three other projects: the under-construction Artistry at Winterfield apartments in Powhatan County, an apartment building it’s developing in Henrico’s Westwood area, and a second complex it’s planning at West Creek on the former Oak Hill Golf Course site.

Hanchrow said construction on the 200-unit Winterfield complex is progressing, with the first units on track to be delivered in April. Around that time, he said Bristol is aiming to start work on the West Creek project, plans for which have been submitted to Goochland County.

The Canopy sale continues a spree of Richmond-area apartment deals in recent months. Many of those have been across the river in Chesterfield County, including Bristol Village at Charter Colony, which Bristol developed in the mid-2000s.