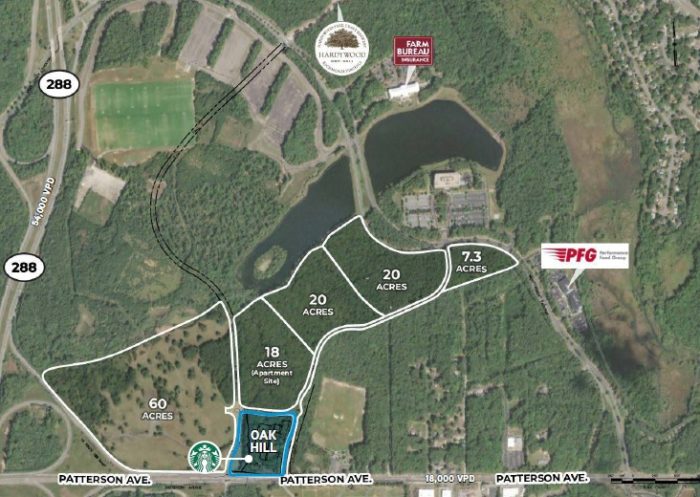 A year after selling its first project there in an eight-figure flip, an apartment developer already familiar with West Creek Business Park is back for another go.

Tennessee-based Bristol Development Group has signed on to build a 335-unit complex as part of the planned development of the former Oak Hill Golf Course and nearby acreage in the business park’s southwestern corner.

The project would fill an 18-acre section that’s been earmarked for residential as part of the larger development of the 60-acre golf course site and more than 70 acres east of it, stretching from Patterson Avenue east of the Route 288 interchange to West Creek Parkway south of the park’s lake. 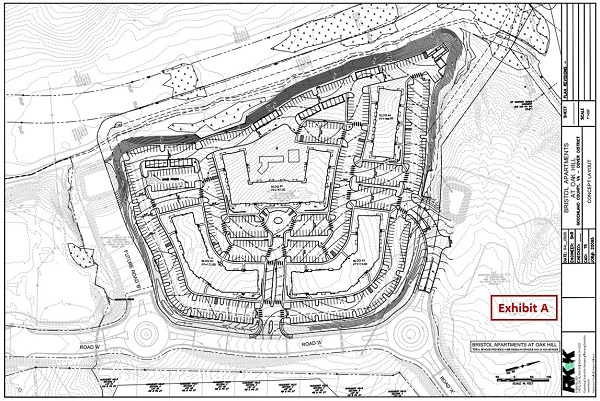 Called Bristol Apartments at Oak Hill in plans filed with Goochland County, the project’s conceptual master plan is set to be reviewed by the Planning Commission at its meeting Thursday. Because the site is subject to proffers previously approved for the park, it is not required to go through a rezoning process.

If ultimately approved, the apartments would complete the allotted acreage for multifamily development in West Creek, according to a staff report to the commission. Other apartments within the park’s boundaries include the 254-unit Retreat at West Creek, developed by Kassinger Development Group, and the 373-unit 2000 West Creek, which Bristol developed for $53 million before selling it last year for $103 million.

The buyer of 2000 West Creek was local real estate firm Capital Square. It was the biggest price tag for a multifamily property seen in the region that year.

David Hanchrow, Bristol’s chief investment officer, said the success of that project in terms of lease-up and sale led to the company being approached by The Pruitt Cos., which owns and operates West Creek with Bill Goodwin’s Riverstone Group, for this latest and final batch of apartments.

Hanchrow said the project, which ultimately will have a different name, is in the early stages in terms of design and dollars. He said a cost estimate for the project has not been set, and rental rates remain to be determined.

“We’re still very early in the process,” he said. “This is a conceptual plan; we’ve still got to go through the (plan of development) process. This is just getting the ball rolling to start that process with Goochland County.” 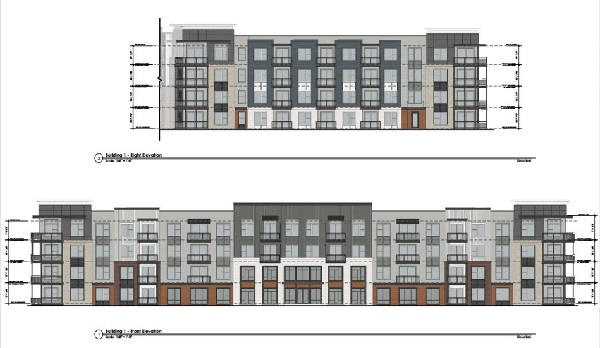 Elevation renderings for the Bristol Apartments at Oak Hill. (Courtesy of Goochland County)

The plans submitted to the county show four buildings housing a mix of one- and two-bedroom units ranging from about 650 to 1,350 square feet in size. The four-story buildings would total 224 one-bedroom units and 111 two-bedrooms.

Each building would include at least one elevator, and apartments would come with stainless steel appliances, granite countertops, and washers and dryers. Amenities would include a clubhouse with pool, an internet café, a fitness studio, a mail center, bicycle storage, a fire pit, and pet recreation and wash areas.

Local firm Poole & Poole Architecture is designing the apartments, and engineering firm RK&K, headquartered in Baltimore, drew up the plans. Construction firm Katerra is lined up as the contractor.

The apartments would rise just north of a planned retail and office section called Oak Hill East, which Pruitt and Riverstone have been marketing with Colliers’ Peter Vick and Harrison Hall. A conceptual plan for that project was submitted to the county last year.

Pruitt said a Starbucks remains in the mix for Oak Hill East, which would also include restaurants and other commercial development totaling 36,000 square feet on about 6 acres.

The companies have also eyed developing the golf course site with a mix of uses including as much as 150,000 square feet of retail space. Pruitt Cos. principal Thomas Pruitt said they’re looking for the smaller Oak Hill East project to set the tone for the rest of the larger development.

“We’re still marketing the site to get some solid restaurant activity,” Pruitt said. “With COVID, it’s changed things pretty dramatically, but believe it or not, we’ve still got a few folks that are still wanting to move forward. We’re getting a lot of the dirt work done for that site right now in anticipation of getting some deals done with some of the restaurateurs.”

At the same time, the companies are working to complete a new road that would connect Patterson Avenue with West Creek Parkway and provide access to the apartments and other development sites. Site work for the road started a few months ago, and Pruitt said construction is scheduled to finish in the second quarter of next year.

As for the apartments, Pruitt said it remains to be decided whether Bristol would enter into a partnership or buy the site outright.

“We’re still trying to work through that right now,” Pruitt said. “Our marching orders are to put the road in and have a site for them to build apartments on.”

Should the review process go smoothly, Hanchrow said Bristol expects to start work on the apartments by late spring next year, with construction lasting about 22 months.

The Oak Hill project adds to a heavy workload for Bristol in the region.

The company also is developing the Artistry at Winterfield apartments in Powhatan County, and it’s planning a five-story, 200,000-square-foot building with 262 apartments in Henrico’s Westwood area next to Kinsale Capital Group’s new headquarters.

Meanwhile, Bristol is marketing for sale the Canopy at Ginter Park apartments that it completed earlier this year in Richmond’s Northside. The $55 million project totaling 301 units was put out for sale earlier this month without an asking price. Colliers’ Mid-Atlantic Multifamily Advisory Group is marketing that listing.

The County and Vdot need to start planning on how they are going to get the tens of millions in funding to add sidewalks and reconstruct the Route 288 interchange for Patterson Ave and Route 288.

Patterson Ave has some of the worst backups on Route 288.

Enough with only building apartments! Apartments dwellers have NO Pride in OWNERSHIP and eventually bring down an area. Has anyone else noticed how many apartment complexes are going up in the West End? It is a symptom of big local developers not having enough competition and taking advantage of the higher property values already in the area. How is it that the same developers are building?

With this development now a year old and seeing the road being build from Patterson into West Creek Parkway. Is the Golf Course still a go or is it dying like many Golf Courses in the area? Also, what are the thoughts of building an outdoor sports park with trails and others attacation next to Striker’s field using the parking lots already created then warp the road around the edge of 288 to meet up next to Striker’s field?