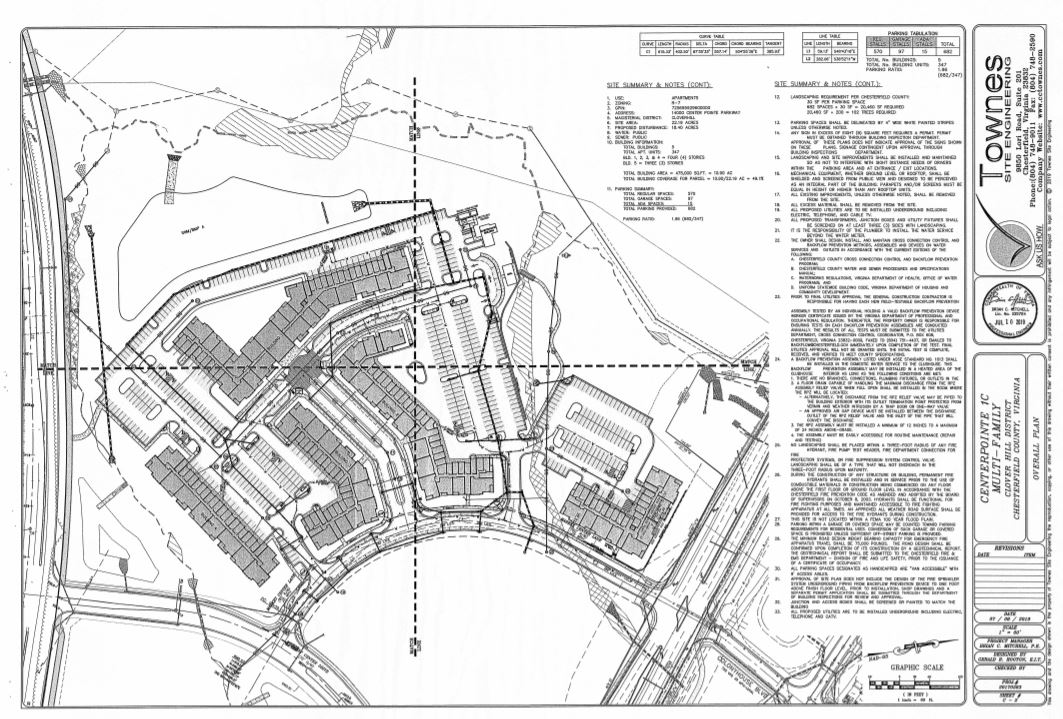 Hundreds more homes are in the works for CenterPointe, as a Midwest-based developer that’s no stranger to Chesterfield County has submitted plans for its next apartment project in the massive Midlothian mixed-use development.

Edward Rose & Sons – the company behind the Enclave Apartments in Midlothian, the Trophy Club at Bellgrade apartments and The Vinings Apartments near Iron Bridge Road – is looking to build a 347-unit complex on 18 acres of a 22-acre site at 14000 Center Pointe Parkway, roughly between St. Francis Medical Center and the intersection of Charter Colony and Brandermill parkways.

The project calls for four four-story buildings and one three-story building totaling 475,000 square feet of building area, along with surface parking totaling 682 spaces, according to a site plan filed with the county. The parking amount comes out to nearly two spaces per unit and includes 97 garage spaces.

Mike Diamente, site engineering director with Edward Rose & Sons’ Indiana office, said existing zoning allows the project to be developed by right and does not require county approvals beyond plan of development review – a factor that he said appealed to the company when it saw the property listing and responded to a call for offers.

“That’s one of the things that attracted us to the site, that the current owner had secured multifamily as an approved use,” he said.

Diamente said Riverstone Group, the Bill Goodwin-backed firm behind the 700-acre CenterPointe development, was quietly soliciting interest in the site when a broker alerted Edward Rose & Sons to the listing. He said a call for offers was later put out and the company struck a deal for the land, which it has under contract.

Riverstone owns the site along with Commonwealth Foundation for Cancer Research Foundation, a Goodwin nonprofit. Diamente said the purchase agreement is contingent on approval of the development plan. The latest county assessment valued the site at $1.99 million.

Diamente would not disclose a total cost for the project, which he said is subject to revisions based on feedback from the county. Following approval, he said site development likely would take six to eight months, followed by an 18-month construction schedule.

“We’re hopeful that we get through the plan review this fall, and we would begin as soon as we could thereafter to break ground,” he said.

The company is working locally with Townes Site Engineering, which drew up the site plan submitted to the county. The architect on the project is Ohio-based Reztark Design Studio.

The market-rate units will include one-, two- and three-bedroom floor plans. Square footages and rental rates have yet to be disclosed. Amenities will include a clubhouse with a game room, kitchen area, lounge, fitness center and yoga room, as well as an outdoor pool and cabanas.

The site is across Charter Colony Parkway from two other developments in the works: a townhome development planned to total 90 lots, and a 192-unit expansion of the 255-unit Colony at CenterPointe apartments. East of the townhomes, Riverstone has set aside land for a grocery-anchored retail center beside the CenterPointe Office Building at Charter Colony Parkway and Lucks Lane.

Adding to CenterPointe’s residential density is HHHunt’s Abberly Centerpointe, a 271-unit apartment complex along Brandermill Parkway that is beginning to come online. Zoned years ago, CenterPointe is approved for more than 900 multifamily units and more than 700 single-family homes overall.

I confess it boggles my mind that people want to live so far out there, especially as traffic is starting to grow.

If you work in West Creek or Short Pump is it really that far out there? Especially if they work in West Creek they have a shorter commute than someone who lives closer in and works in West Creek. As jobs have decentralized it allows the housing market (both owner and rental) to expand its footprint. Not where I want to live but I can see who would.

This site to West Creek is 16 minutes per Google. Of course rush hour will be a bit longer.