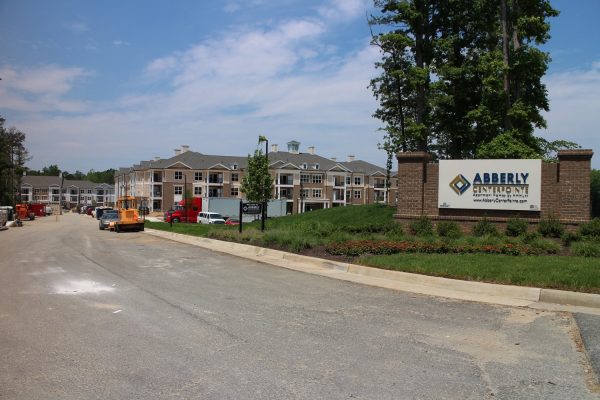 The newest stretch of Brandermill Parkway is about to get busier with the addition of a years-in-the-making apartment development and more homes on the way.

HHHunt’s Abberly CenterPointe apartments has started moving in residents in the first building completed at the under-construction complex, which is scheduled to be finished next month.

The 271-unit complex is taking shape on a 26-acre site along Brandermill Parkway north of Old Hundred Road, beside the Brandermill Woods retirement community and across the parkway from Bon Secours Drive that leads to The Memory Center Richmond and St. Francis Medical Center. 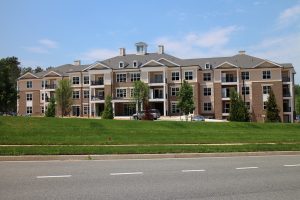 The complex’s main building – a horseshoe-shaped structure with apartments enclosing a clubhouse and pool area – is set to open next, making available amenities that include a fitness center, game room, yoga room and business center. The central courtyard will include a pool house with bar and outdoor TV, a fire pit and grilling areas. Other amenities include a dog park and playground.

Announced five years ago, the $42 million project was delayed a couple years due to unit modifications and financing through the U.S. Department of Housing and Urban Development, which is providing mortgage insurance through its rental and cooperative housing program.

In that time, that stretch of Brandermill Parkway was extended to connect with Charter Colony Parkway, creating a vital connector road for CenterPointe, Riverstone Properties’ massive, 700-acre development along Route 288 northwest of Powhite Parkway. 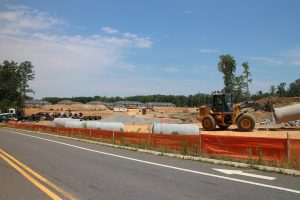 Site work along Charter Colony Parkway is making way for a second phase of the Colony at CenterPointe apartments and a new townhome section.

Farther north, at Brandermill Parkway’s intersection with Charter Colony Parkway, land has been cleared and site work is underway on two more projects that will add more rooftops to the area: a second phase of the Colony at CenterPointe apartments, and a townhome development planned to total 90 lots.

The expansion of Colony at CenterPointe, renamed from Oxygen at Centerpointe when the 255-unit complex changed owners in late 2017, will add 192 additional apartments in the same style as the first phase, said Jeff Galanti, a principal with Riverstone. Robinson Development Group, the Norfolk-based firm that developed Oxygen in a joint venture with real estate firm Drucker & Falk, is on board again for phase two.

The additional units will fill an 11-acre tract that Robinson purchased in August 2017 for $5.47 million, according to Chesterfield County property records. The company sold the 18-acre first phase three months later to Atlanta-based Preferred Apartment Communities, a publicly traded real estate investment trust that purchased the apartments for $45.83 million.

Immediately east, site development is underway for a townhome community totaling 90 lots to be sold off to builders. Galanti said Riverstone has about a dozen firms on its list that are vying to build the townhomes, which will range from two to three stories and feature rear-loading garages with alley access. Galanti said lots are anticipated to start selling to builders in early fall.

“We’re speaking to 10 or 12 builders,” Galanti said. “They’re all interested, because that is a product that’s doing really well right now, and we think that’s a good market for that kind of product.”

The bulk of the homes will be three levels and front central boulevards, while units backing up to 288 will be two stories due to higher topography closer to the highway. The community, to be called CenterPointe Townes, also will include a clubhouse. Prices for the homes are expected to range from the upper $200,000s to lower $400,000s.

A rendering of the clubhouse planned for CenterPointe Townes. (Riverstone Properties) 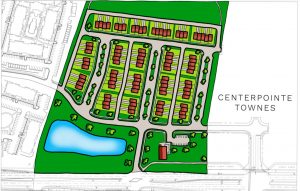 As part of the project, Riverstone is widening Charter Colony Parkway from two to four lanes from Brandermill Parkway to the intersection with Center Point Parkway and Lucks Lane. A multiuse path also is being installed along the east side of Charter Colony to connect with the developments.

Between the future townhomes and the existing CenterPointe Office Building beside Lucks Lane, Riverstone is planning a grocery-anchored retail center that Galanti expects to pick up interest with the additional homes and road widenings, which next year will include CenterPointe Parkway. A timeframe and design for the retail development will be user-driven, he said.