Already underway on a big apartment project in the Boulders, a developer with a taste for suburban office parks is planning hundreds more units across the river in Innsbrook.

Richmond-based Dominion Realty Partners is looking to develop a mix of apartments and for-sale townhomes totaling 360 units on about a dozen acres at 5000 Dominion Blvd., beside Dominion Energy’s Innsbrook operations center.

The complex would fill a mostly undeveloped tract that Dominion Energy listed for sale over the summer. The site, which consists of wooded land and parking lots, is just north of the company’s office building there and abuts an adjacent residential subdivision. 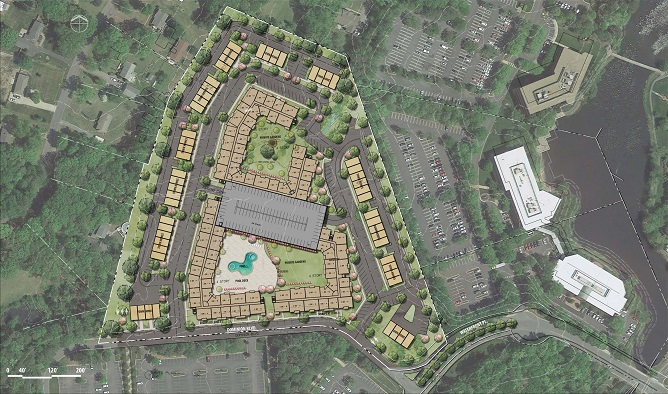 Plans filed with Henrico County show that DRP, which is unrelated to Dominion Energy, would develop two four-story apartment building clusters around a central parking lot, with the townhomes encircling them along the property’s perimeter.

The townhomes would be grouped in four- and six-unit clusters and are meant to provide a transition between the apartments and nearby houses. A conceptual site plan shows 55 townhome units, leaving the apartment count at 305.

The townhomes would be the first to be built in Innsbrook under the county’s urban mixed-use zoning, which Henrico started allowing in the office park through an overlay district created in 2016. As intended, the move has resulted in an influx of infill developments, such as WAM Associates’ Innslake Place Apartments and a mixed-use project by Robinson Development Group.

DRP’s complex would include a pool and fitness center among its amenities. The development would conform to the county’s adopted design guidelines for Innsbrook’s UMU district.

County planners are suggesting that DRP reorient the layout to position the apartment buildings closer to Waterfront Place, among other recommendations detailed in a staff report. The case was scheduled to go before the Planning Commission at its meeting Thursday evening and would require final approval from county supervisors. 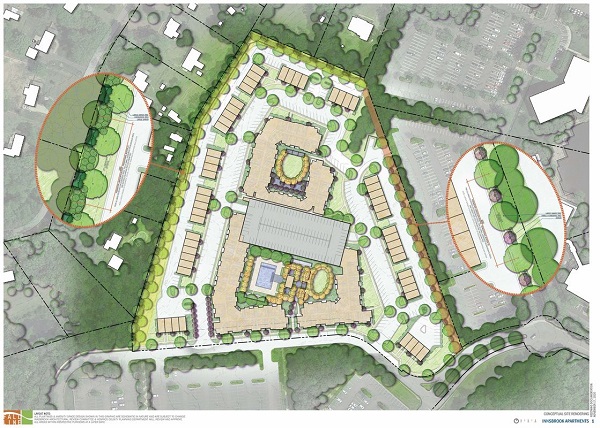 Hirschler attorney Jim Theobald is representing DRP in its rezoning and provisional-use permit applications. Atlanta-based Rule Joy Trammell + Rubio is the architect on the project. Richmond-based Fall Line is the landscape architect.

The documents do not list rental rates for the apartments or price points for the townhomes. A call to DRP President Michael Campbell was not returned Thursday.

County property records show that Dominion Energy still owns the tract, which has not been subdivided from the company’s 63-acre property.

DRP has found success with similar projects in Chesterfield, where it is developing 462 apartments over two phases on about 50 acres in Boulders Office Park. The company, which has offices in Richmond and North Carolina, redeveloped the Hotel John Marshall building downtown. Other projects in Richmond include the 188-unit Manchester Place and Riverside on the James.

Varina events venue proposal to be heard in February

Thursday’s Planning Commission agenda had been planned to include a public hearing on a proposed events venue and bed-and-breakfast in Varina. That hearing was deferred and is now scheduled for the commission’s Feb. 11 meeting.

The proposal, from property owner Jocelyn Senn, would use her riverside home at 1520 Rustling Cedar Lane and adjacent properties she’s acquired as a B&B and venue for weddings and other events. The proposal drew criticism from speakers in a community meeting last month, including several of Senn’s neighbors.

County planners had noted the combined site, at 9128 Osborne Turnpike, is surrounded by large-lot residential properties that could be impacted by outdoor events.

Senn was asked to provide details on how she would mitigate impacts, such as through restrictions on frequency of events, number of guests, access, hours of operation and noise. The deferral allows her more time to do so.

It’s good to see DRP so active again in the Richmond area, after so much time in North Carolina. They are excellent builders and a strong choice for the Dominion site by the CBRE team.

They should look into covering the top of the parking deck and buildings with solar panels or cover some of the buildings with greenroofs with grass to cut back on the paved over space.

The good news is they are using a existing parking lot for this.

Innsbrook is the next Scott’s Addition.

Can’t agree with that at all. It misses the point of what makes Scott’s addition attractive completely.