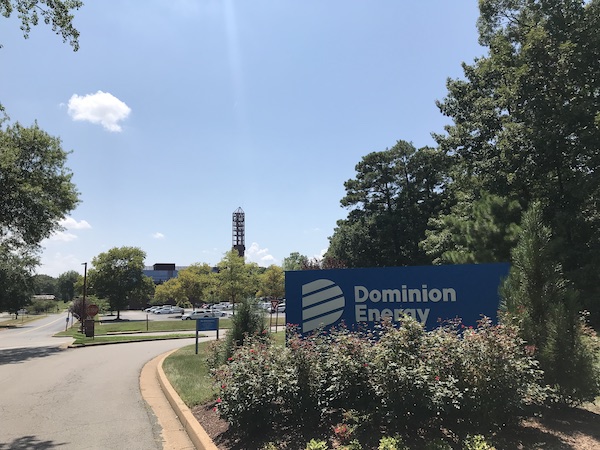 Dominion Energy has listed about a dozen of the 63 acres it owns in Innsbrook for sale. (Mike Platania)

Richmond’s resident utility giant is breaking off a chunk of its holdings in Innsbrook in a move that could bring more multifamily development to the suburban office park.

Dominion Energy has listed for sale about 12 acres of undeveloped land it owns at its Innsbrook operations center at 5000 Dominion Blvd. in Henrico.

The company has been in discussions with an unnamed buyer who would look to plan a multi-family housing development for the site. Dominion spokesman Ryan Frazier confirmed the matter.

Dominion operates a roughly 417,000-square-foot office building on the site, but also has owned 63 acres surrounding it, much of it parking lots and wooded areas, since 1984.

The 12 acres is listed for an undisclosed price with CBRE’s Jason Hetherington, Andrew Ferguson and Chris Wallace.

The land is zoned for office use and would need to be rezoned should any multifamily plan come to fruition. Innsbrook has had a streak in recent years of land being rezoned to the county’s urban mixed-use zoning, which was utilized for the nearby Innslake Place apartments.

Dominion earlier this year disposed of some of its downtown real estate in a different way – by imploding its 21-story One James River Plaza office tower at 701 E. Cary St. The site now is being cleared to potentially make way for a second tower to match its new 600 Canal Place next door. Dominion has not decided if it will build the second tower.

I know for years they had talked of expanding out there. Is this the beginning of the acknowledgment for them to work remote? Don’t need that expensive 2nd tower for no employees either.

And you have to think a few on the exec floor are going “Yesssss, Smithers…..”when they think about the new tax burden on the imploded building site as a way to say thank you to Stoney for not getting the new arena deal done that Dominion wanted so badly

The era of large isolated suburban office parks and retail malls has passed. All these are being repositioned as mixed use communities where hopefully people will live, work, and recreate without the use of automobiles. The plan to redevelop the retail portion of Innsbrook is underway as well. Regency, Stony Point, Virginia Center Commons, Innsbrook, Boulders . . . all welcoming high density housing and recreation uses. The Richmond downtown is being transformed as well, bringing thousands to the streetscape. Perhaps Dominion will consider a mixed use building as it’s next million square foot tower.