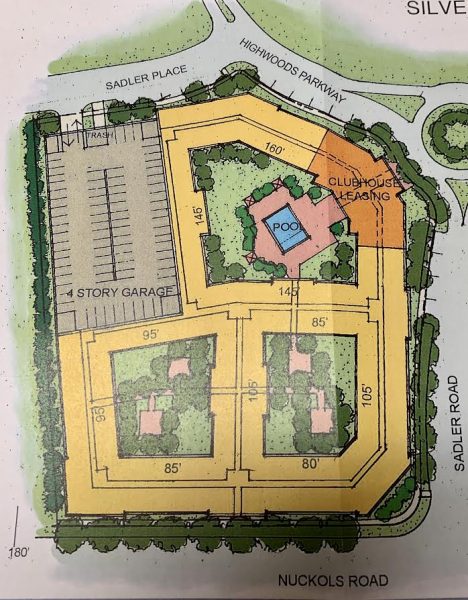 The run on new apartment development in an established Henrico office park continues to gain traction.

The proposed development, dubbed Silver Hills at Innsbrook, would consume a grassy lot owned by Raleigh-based Highwoods Properties, one of the larger landlords in Innsbrook. The land sits next door to the U.S. Postal Service complex and across from The Overlook office complex at 4870 Sadler Road.

Jane DuFrane, Highwoods’ vice president and market lead for its Richmond division, declined to comment about the plans, including whether it is under contract with Edwards Communities to sell or lease the property.

Nathan Shor of S.L. Nusbaum Realty is representing Edwards Communities, while Lindsey Barden of Dark Horse Commercial Real Estate is representing Highwoods. Neither would comment about the project.

Highwoods purchased the property in 2008 for $1.2 million. The site most recently was assessed by the county for about $1.1 million, according to real estate records. 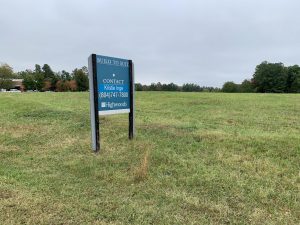 A Highwoods build to suit sign sits on the site of a proposed 252-unit apartment development at 10945 Nuckols Road in Henrico’s Innsbrook. (Photos by J. Elias O’Neal)

Seth Mendelsohn of Silver Hills Development, which is co-developer on the project with Edwards Communities, was not ready to comment.

Edwards Communities is a multifamily development firm that has constructed several apartment communities in Denver; Columbus, Ohio; and Louisville, Kentucky, according to its website. Silver Hills would be its first project in Virginia.

Silver Hills’ plans call for a four-story apartment complex with a 5,500-square-foot clubhouse and leasing office; a pool; a 320-space, four-story parking garage; and multiple interior courtyard areas, according to the site plan.

The parking garage, which would be constructed next door to the U.S. Postal property, would be accessible only via Sadler Road. There would be no immediate access to Silver Hills via Nuckols Road. The complex also would not have any private access to the USPS property. A traffic roundabout would be installed between the Silver Hills apartments and The Overlook office complex on Sadler Road, according to plans, including 15 parallel parking spaces along Sadler Road.

Several of the apartment units will line the perimeter of the roughly octagon-shaped property, according to site plans, which include several sidewalks around the development.

Draper Aden Associates is listed as the project’s civil engineer. A general contractor was not disclosed in the plans.

The Nuckols property previously was slated to be part of a much larger mixed-use development first proposed and approved in 2013 that included a 12-story office building and a four-story, 156-unit apartment building. However, that project never materialized and the site has remained undeveloped. 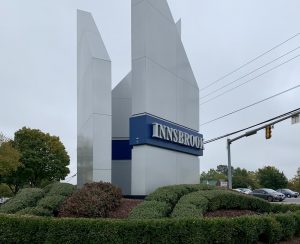 Urban mixed-use projects are growing with popularity amongst developers in Innsbrook.

The site is zoned urban mixed-use, a designation that encourages a mix of residential and commercial uses on the property and has begun to attract apartment developers to the suburban office park.

This month the Henrico Planning Commission recommended a 13.3-acre site at 4359 Sadler Road be rezoned from office to urban mixed-use to accommodate up to 700 apartments and nearly 28,000 square feet of commercial space. It also recommended a provisional use permit be granted to support a variety of uses for commercial development, such as drive-thru windows for banks or coffee shops, and outdoor vending area for permitted special events or markets, at the site.

Construction is underway on a 100-unit, five-story apartment building at 4235 Innslake Place near the Innsbrook Drive and Dominion Boulevard intersection, by a development group led by Joe Marchetti Jr. and Richmond-based WVS Cos. A second four-story, 123-unit building is planned as part of that development’s second phase.

Just south of Innsbrook, father-son duo Steve and Jack Middleton of Richmond-based Commonwealth Properties LLC are finalizing plans with Henrico for another apartment development on a 5.4-acre tract at 3500 Cox Road.

Jack Middleton said the project, which was rezoned urban mixed-use and approved for up to 407 apartments in seven stories in June 2018, is still on track for a spring 2020 groundbreaking.

Watch out because Innsbrook could become the next hot apartment and condo market. As soon as a couple of these projects come out of the ground the feeding frenzy on suburban office parking lots will begin. If done properly it will offer another option to people that want that style of living but are still hesitant about moving to the city. If nothing else this will be interesting to watch.

Now that Henrico and Chesterfield have joined the apartment boom, it’ll be interesting to see if the pressure let’s up in the City. The City processes as many permits per year as Henrico with half the dedicated staff. Perhaps there will be some relief? Will the young trade in the urban environment to live near suburban malls and office parks?

Manchester and Scott’s Addition are the current hotspots but Navy Hill looms large in the horizon. Downtown rents are escalating
fast and anything that is built gets filled.

half the staff, and a tenth of the efficiency…

As I’m sure you know, the young aren’t going to trade in the urban environment. I’m seeing a lot of county dwellers pulling the switch and moving into the city. Though Oh My God are they PITA. They think it’s 1997…

no one who is interested in city life wants to live in Innsbrook. We think of that area as “Short Pump” and it’s used pejoratively. Two entirely different markets, though a lot of the non-city people are noticeably getting interested in the city because of the walkability/density of entertainment. But no one I’ve met looking at the city will look further out than Willow lawn or Lakeside – Innsbrook is the dark side of the moon.

I’ll start considering Innsbrook a challenger to Scott’s Addition when they pop up a couple of breweries.

Very true, though they may be seeing some displacement from rising rents in the city as apartments cannot be built fast enough. I imagine the target residents for Innsbrook will be those moving from outside the metro or from abroad as they take on new jobs in the area. A few years down the road, those residents may eventually move into the city as others transition in behind them.

Just because some people want to live in the city does not mean everyone does. There is a market for people that do not want full urbanity but want the walkability and low maintenance that developments like this. Looks at the prices the townhouses in West Broad and Greengate are getting. I personally think it is crazy too and would not necessarily want to live there, but there are obviously people that do and if you ignore them then you are ignoring a chance to make some money. Plus, don’t forget the biggest draw of the Counties, the schools. People… Read more »

And presumably, the high property and sales tax rates, the proceeds of which never apparently get directed to the proper areas in need.

Follow the $$$. Once again, thoughtless planning on the part of the Henrico County Planning/Rezoning Commission with no improvements in infrastructure to support the increased traffic & road use demands that all of these new projects will create. It already takes an eternity (and the patience of Job) during rush hours (and police directing traffic) to get to and from office buildings in the Highwoods section of Innsbrook via Highwoods Parkway to Sadler Place to Sadler Road to Nuckols or from Highwoods to Waterfront to Cox to Broad. As there will be no direct access to this project from Nuckols… Read more »