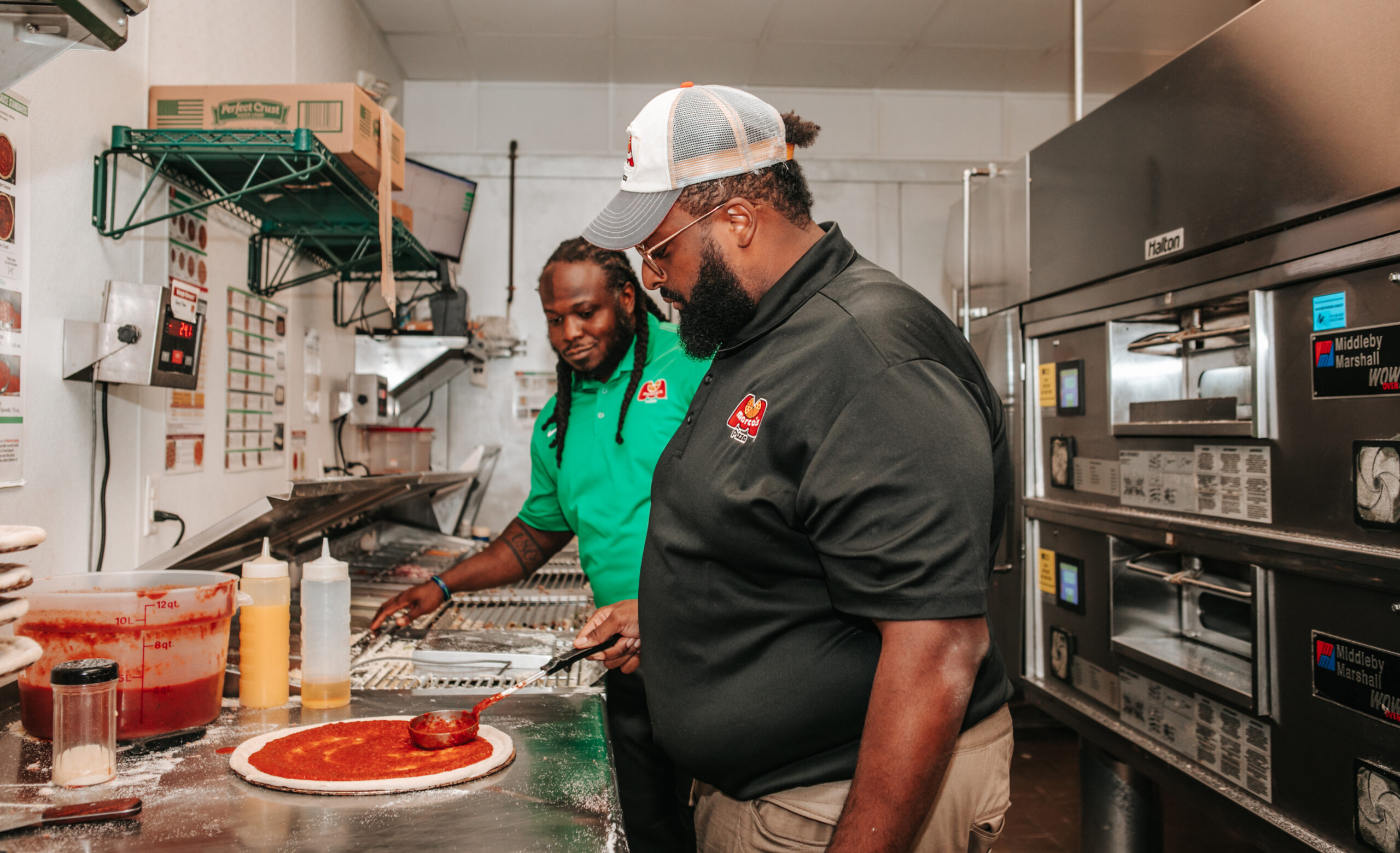 Brandon Hudson, right, and Damion Mason are opening their sixth Marco’s Pizza restaurant in the area in a former Pizza Hut in South Richmond. (Photos courtesy of Marco’s Pizza)

Two local pizza chain franchisees have grabbed another slice of the Richmond market.

Brandon Hudson and Damion Mason are opening their sixth Marco’s Pizza restaurant in the area, this time in a former Pizza Hut building at 5817 Midlothian Turnpike in South Richmond.

It will be the 11th Marco’s location in the region overall, adding to five others owned by separate franchisees Sara and Harry Ragsdale.

The new Midlothian Turnpike store will make Hudson and Mason’s operation Marco’s largest African American-owned franchisee, they said. According to its website, Marco’s Pizza now has well over 1,000 locations nationwide.

Hudson and Mason learned about the South Richmond property through Marco’s corporate and bought it a few weeks ago, through an all-cash deal. They did not disclose the price and online city property records did not yet reflect the sale. Thalhimer’s Reilly Marchant represented them in the deal.

Left vacant by Pizza Hut, the property caught their attention as a place with ready infrastructure and clientele, Hudson said.

“Talking to some of the people in that area, they really missed that pizza place,” the 39-year-old said. “We felt like we could fill that void.”

Hudson said the space will need around $500,000 in renovations, while certain necessities such as phones, walk-ins and grease traps remained. The business partners are funding the renovations themselves, including the purchase of new equipment. To counteract any potential delays, ovens were purchased before the property was even found, Hudson said.

They’re planning an October or November opening for the Midlothian Turnpike location. It will emphasize to-go dining and will be the pair’s first venue to offer a drive-thru.

Fast Tracked Construction has been hired to renovate the space. 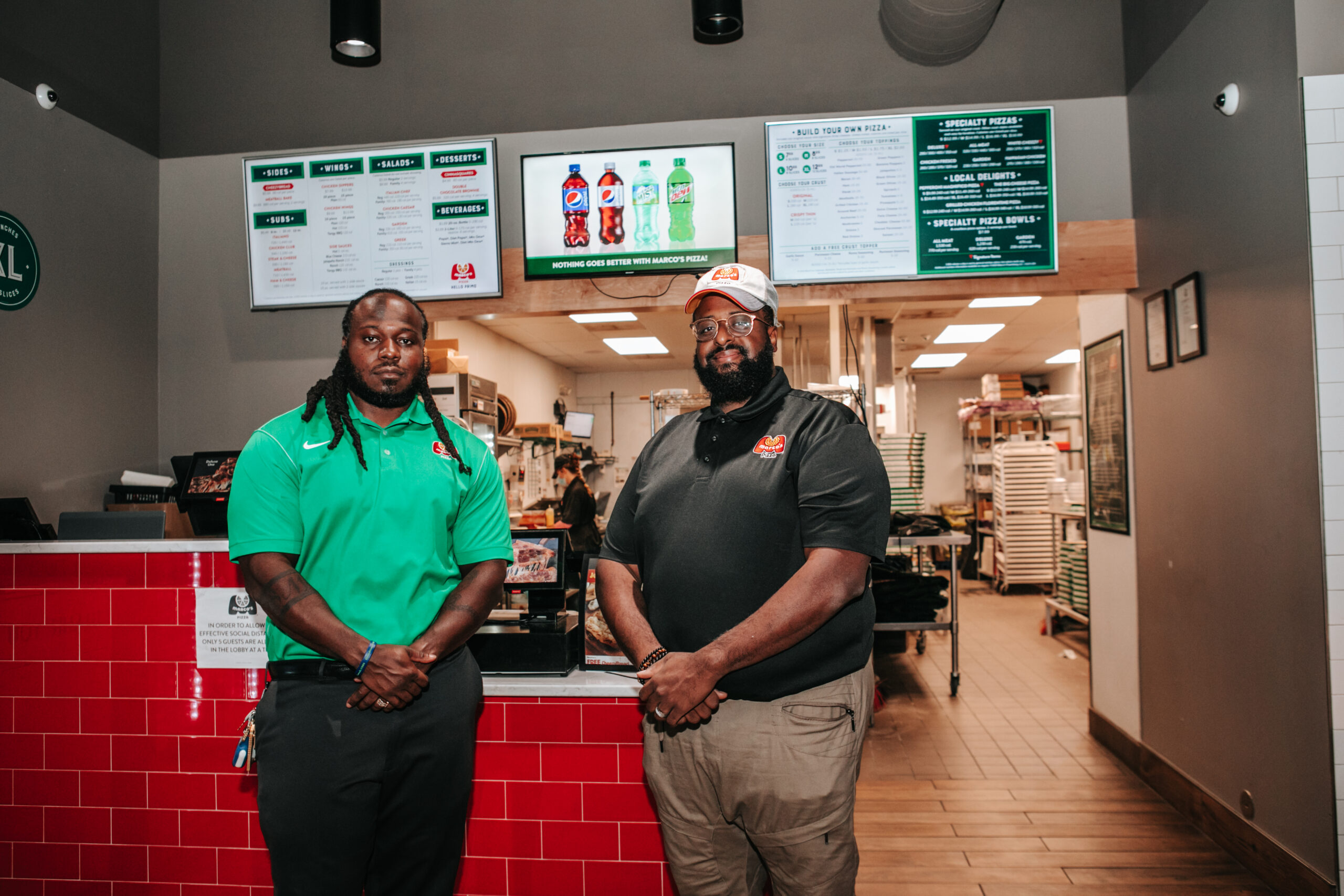 Hudson and Mason bought in as Marco’s franchisees in 2017. At the time, Mason was working for Hudson’s mental health company, Simple Intervention, and the two were looking to get involved with a franchise that was growing.

Hudson first tried Marco’s Pizza at the Chesterfield location near his home.

“It’s not this whole complicated story,” Hudson said, laughing. “I tried it. I said, ‘Oh my goodness, this is great.’ We would eat it every Friday.”

The pair opened their first three Marco’s stores in Chester, Colonial Heights and near Richmond International Airport. The other two were acquired in March 2021, including the Chesterfield spot that inspired Hudson to become a franchisee, and one in Lynchburg.

Though Mason notes that pizza sales rose during the pandemic, the business has not escaped supply chain and staffing challenges. The franchises typically hire between 15 to 20 employees, which includes delivery drivers.

Besides Marco’s Pizza, Hudson is also a recent franchisee of Goddard School, a chain of early-education centers. Alongside his wife, Kendra, the two are renovating a 12,000-square-foot space in Regency mall to serve as a pre-school, kindergarten and day care center.

Hudson expects the Goddard space to be ready sometime between November and February. Supply chain issues have delayed the arrival of certain amenities, such as the HVAC system and playground materials.

Mason, 41, also operates a behavioral health company in Maryland with his wife.

Concerning Marco’s Pizza, Hudson and Mason have committed to creating another five locations across Virginia.

“For right now, I’m focusing on just tackling these things,” he said, referring to all his current business operations. “I got to make sure that the ventures that we have are successful.”

Did they just out pizza the Hut?