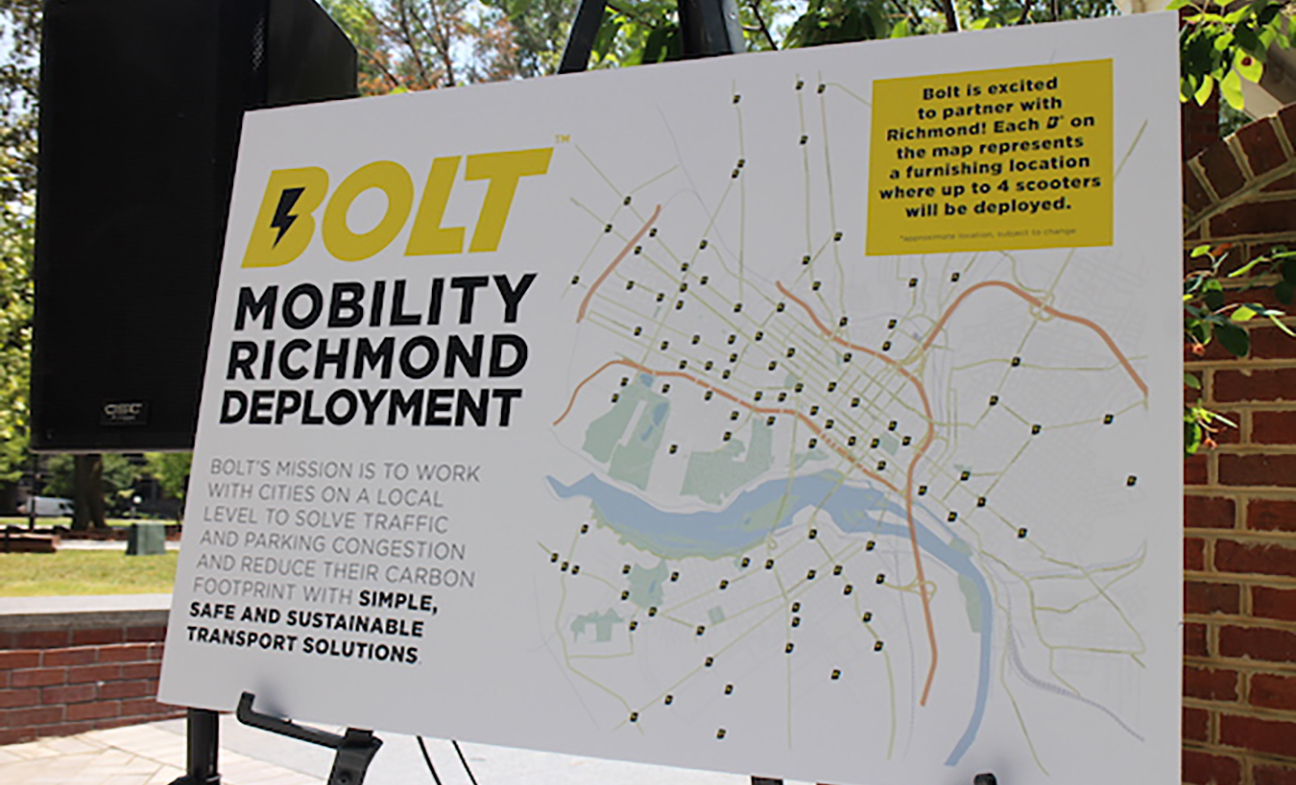 Bolt Mobility was the first to receive a license to operate e-scooters in Richmond. (BizSense file photos)

An e-scooter provider has unplugged from Richmond.

Bolt Mobility, the first licensed scooter company to roll into the area in 2019, informed the city on June 7 that it was ceasing local operations.

Bolt’s permit officially expires on Aug. 1, according to Brandon King, program and operations supervisor at the Department of Public Works, which regulates scooters in the city.

King, in an email, also confirmed that Helbiz, another scooter company with devices in Richmond, did not renew its permit once it expired on Jan. 26.

The city could not provide the reasons for the departures, as providers are not required to report such information.

Bolt and Helbiz could not be reached for comment by press time.

It appears that Bolt has vacated other markets around the country, including in California and Vermont, according to news reports. Meanwhile, when trying to request a scooter through the Bolt app, a message encourages users to do so in 30 other countries, such as France, Nigeria or South Africa, but not in the U.S.

When it was still operating, King said Bolt deployed 124 scooters a day and paid $30,000 a year to renew its licensing. The fee is based on how many devices a provider is allowed in the city and the price has not changed since the program was initiated.

The two departures have left Lime and Bird as the only e-scooter companies still licensed in the city. The scooter trend began in 2018, when Bird released its devices in Richmond without the city’s prior approval, causing them to get impounded and prompting the creation of a licensing system.

“Overall, the program is thriving and constitutes a vital transportation option for thousands of Richmonders each month,” he said. 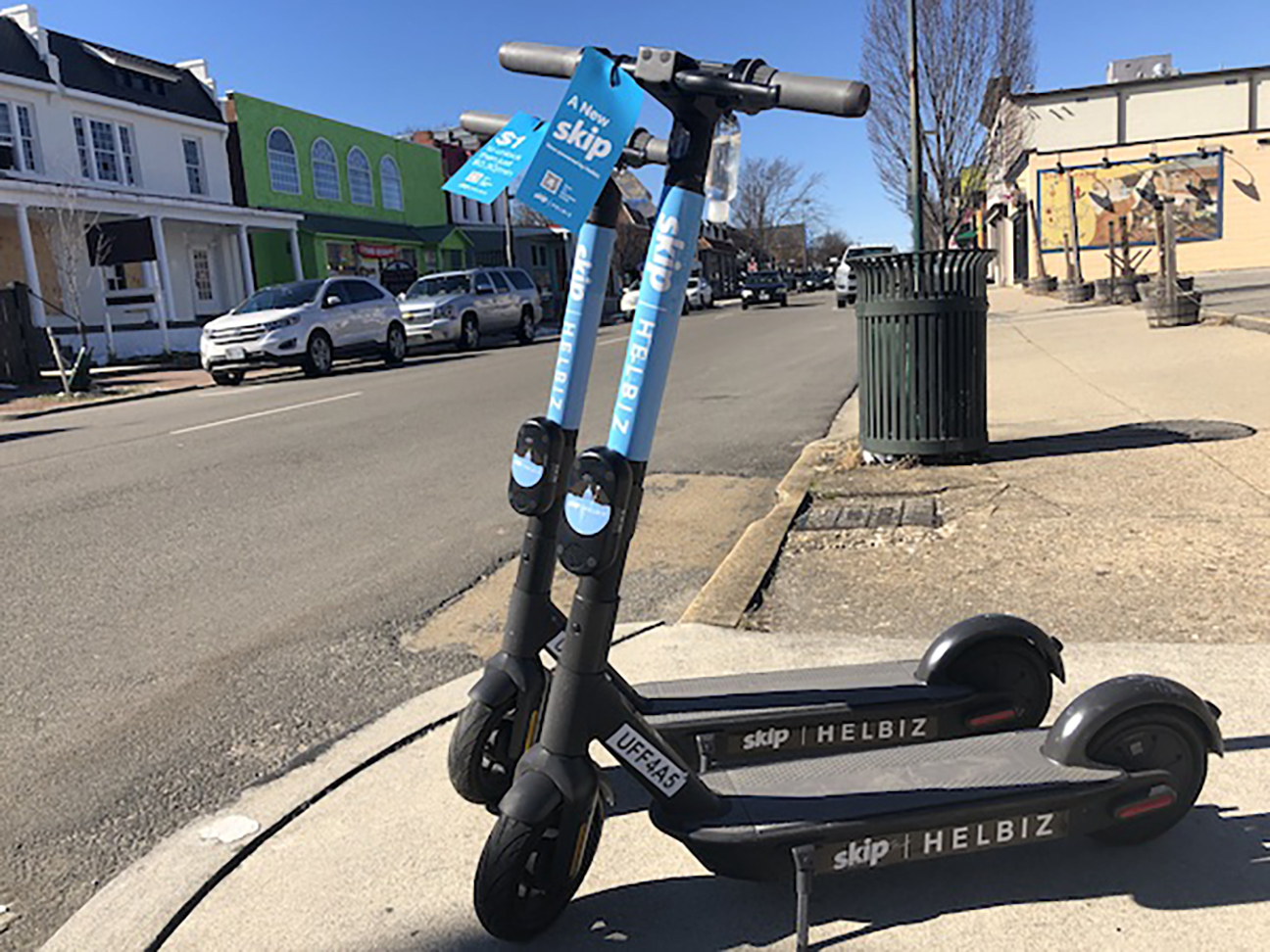 Helbiz did not renew its permit when it expired on Jan. 26.

He added that the Shared Mobility Device ordinance may be amended to extend scooter operating hours and promote a more equitable device distribution. As of right now, the city allows scooters to be ridden between 5 a.m. and 9 p.m.

Bolt Mobility was leasing office space at 3310 Rosedale Ave. It’s unclear where Helbiz was located in the region but permitting requires each provider to have a physical space.

Meanwhile, the Department of Public Works has also been involved in expanding Richmond’s bikeshare program, initiated in 2017.

Aiming to eventually create a citywide fleet of 440 bikes and 40 docking stations, Richmond has continued developing the needed infrastructure. It currently has 21 stations, King said, with the most recent installations at Fairmont Pool, Broad Rock Library, Battery Park Pool and North Avenue Library.

King also noted other planned locations, such as in Forest Hill Park and Ann Hardy Plaza in Northside, as well as a number of libraries. The department has partnered with Richmond Public Library to provide bicycles to disadvantaged communities.

Alongside the expansion, the department is working to transform the makeup of its bike fleet into electric pedal assist by 2023. So far, there are over 200 bicycles in operation.

“We believe e-bikes are a game changer in public transportation, particularly in a city as hilly as Richmond,” King wrote.

Riders have a number of fee options, ranging from a $1.75 one-way pass to a $96 annual membership.

While the fleet is owned by the city, Bewegen Technologies is contracted to maintain the bikes.

I hope they are required to collect all of their e-scooters before they bolt out of town. 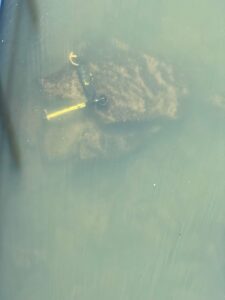 While I definitely agree, they ought to make the idiot who thought it was funny to throw it in the canal climb down into that nasty water to retrieve it.

Bolt should retrieve them and pass the cost on to the user who tossed them in the James. I noticed two from the Potterfield Bridge.

The craze, like cupcake and ice cream parlors, is fading. I would not be surprised if we loose another vendor. Got to love the city….what company is applying??? 50% of the operators leave and it is a thriving program ??? City is subsidizing current system at $2000 a year per BIKE. Wait until they are all electric ped assist bikes and we are paying $5000 a year per bike to subsidize. Can you imagine $2M a year for 400 plus bikes.

People downvoting this are probably the same people who think it is immoral to live out in the counties where their tax dollars are not spent on fairy dust and banditry.

Absolutely. Look at the cost. You’re spot on. Put the money elsewhere to assist people that need transportation help.

I was going to mention the amount of abandoned scooters in Richmond.

One time my daughter and I were crossing back from Belle Isle and we saw not one but THREE tossed-down scooters in the James! These idiots should be severely punished.

My question is, if the company has departed and pulled out from a number of cities – what happens to the scooters (that haven’t ended up in the James or the Canal)? Are they still operational? Do they belong to the City or are they still considered property of the companies that pulled out? As someone who hasn’t had the pleasure of using one, I’m not sure how they operate – hence the questions.

It appears they’re just abandoning them in the cities they are leaving.

What would it take to “unlock” them?
right now you are suppose to use the app to activate them, but if they are left behind then hacking into them is no ethical issue.
What would stop someone from scooping them all up and selling them, if unlocking is an easy task, either to end users or to the remaining scooter operators?