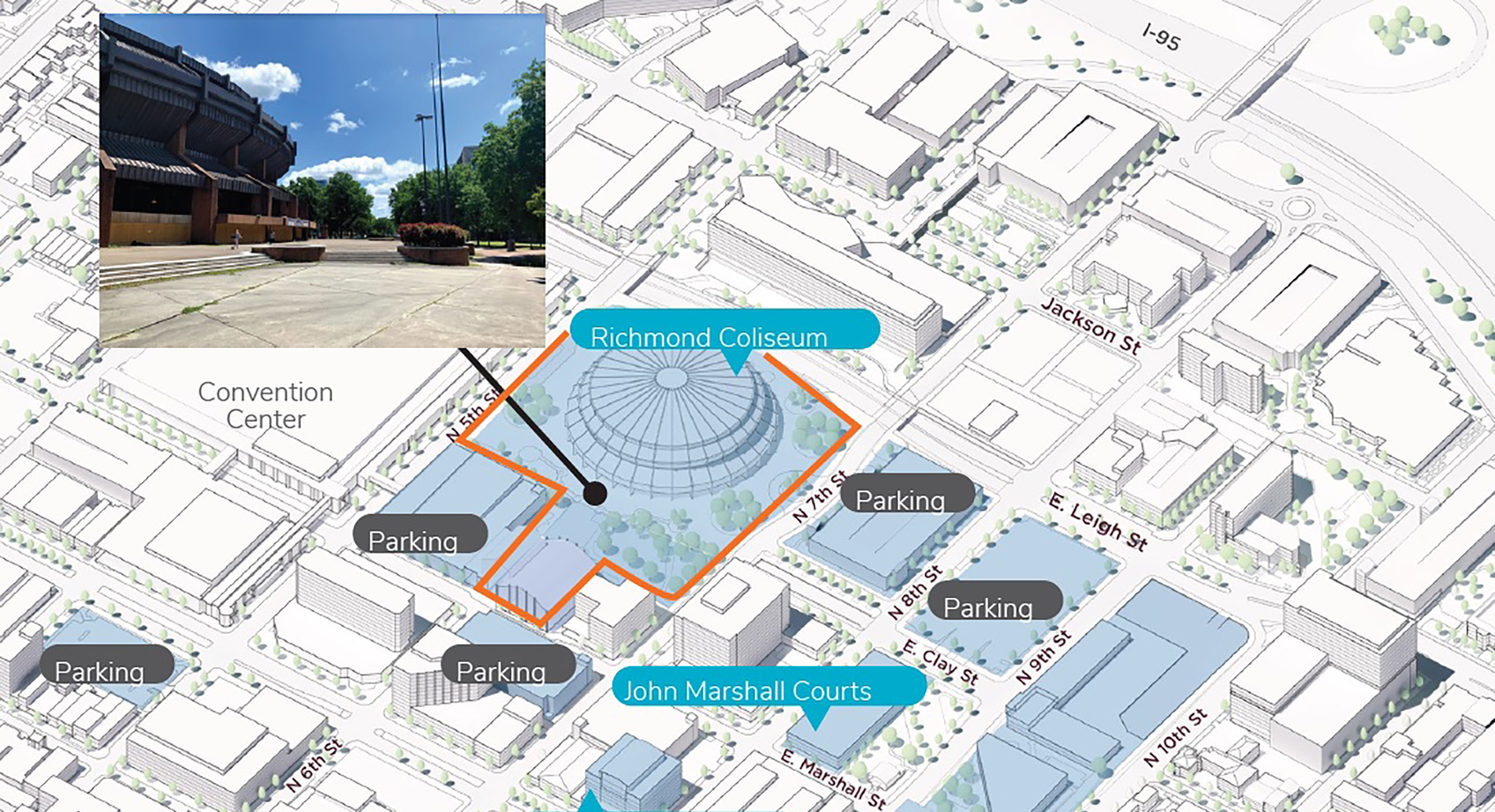 Just weeks after the selection of a Diamond District developer, Richmond’s City Center area is now positioned for similar development interest following a joint solicitation that went out Thursday.

Richmond’s Economic Development Authority and the Greater Richmond Convention Center Authority issued their anticipated request for interest (RFI) from development teams that want a shot at transforming part of the downtown area that includes the Richmond Coliseum.

The 242-page document invites teams to submit their information to be considered for development of a 9-acre assemblage that includes the shuttered arena and the site of a long-sought convention center hotel. Thursday’s announcement described the project as a first phase of a larger effort to revitalize the 20-block area now dubbed the City Center Innovation District.

The first phase involves demolishing the Coliseum, adaptive reuse of the neighboring Blues Armory building, infrastructure improvements, and development of a 500-room hotel with meeting spaces and other facilities to support the convention center.

The RFI came one day after the EDA acquired the 7-acre Coliseum property in a deal that the City Council approved this spring. The 50-year-old arena – a $57 million property by the city’s own assessment – was sold to the EDA for 10 bucks. 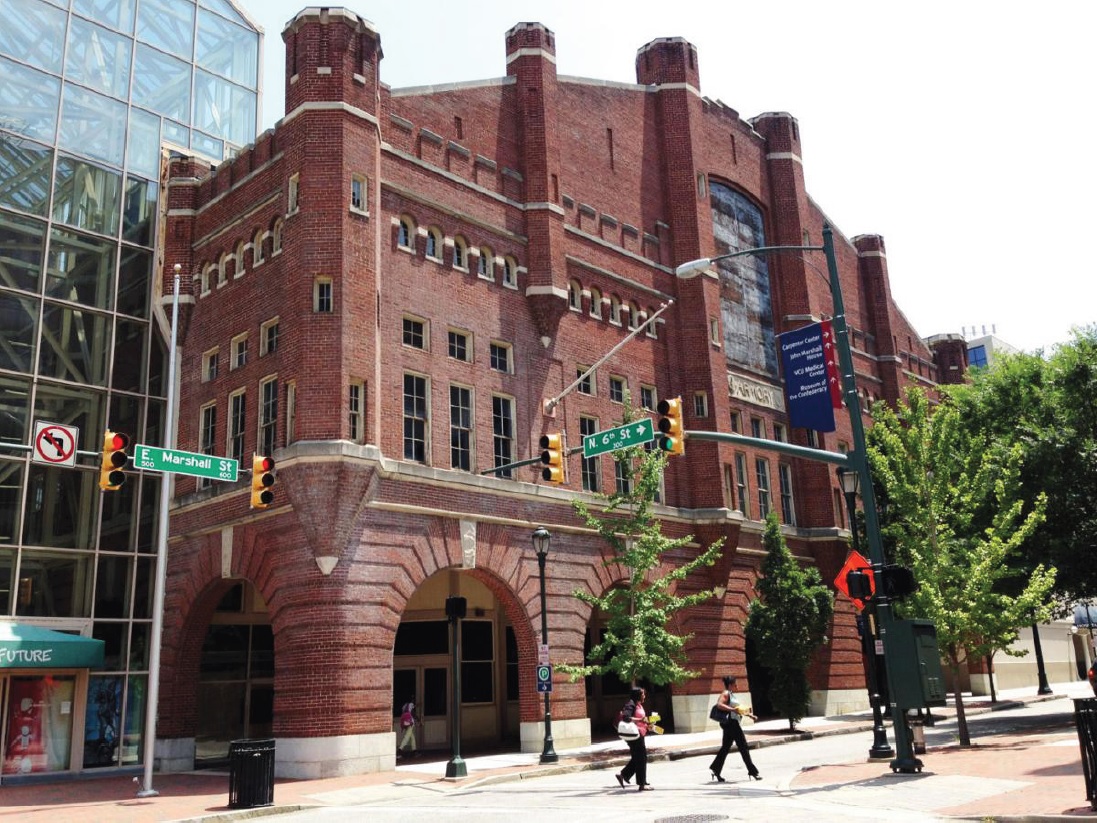 The Blues Armory building on Sixth Street is part of the project area.

Also transferred to the EDA, with no dollar amount involved, were five parcels that make up the rest of the assemblage: the Blues Armory building at 411 N. Sixth St., and adjoining properties beside and behind it that once made up the old Sixth Street Marketplace and Festival Park.

Those properties – including 406 and 408A N. Seventh St., and 530 and 550 E. Marshall St. – were transferred from the Richmond Redevelopment & Housing Authority, which had also once owned the Coliseum before it was moved to city ownership in 2016. The five RRHA parcels are assessed by the city collectively at just over $3 million.

The transfers to the EDA were the last step needed to issue the RFI, which also relied on a rezoning of the 20-block City Center area that was approved in September. The RFI was finalized with input from the GRCCA and approved by the EDA board.

Involving the GRCCA adds a regional touch to marketing the site, which is made up of some of the properties previously pitched for Richmond’s unsuccessful Navy Hill plan. Where the city was driving that effort on its own, the joint solicitation with the GRCCA brings in the neighboring counties of Chesterfield, Hanover and Henrico, whose chief administrators are among the authority’s membership. 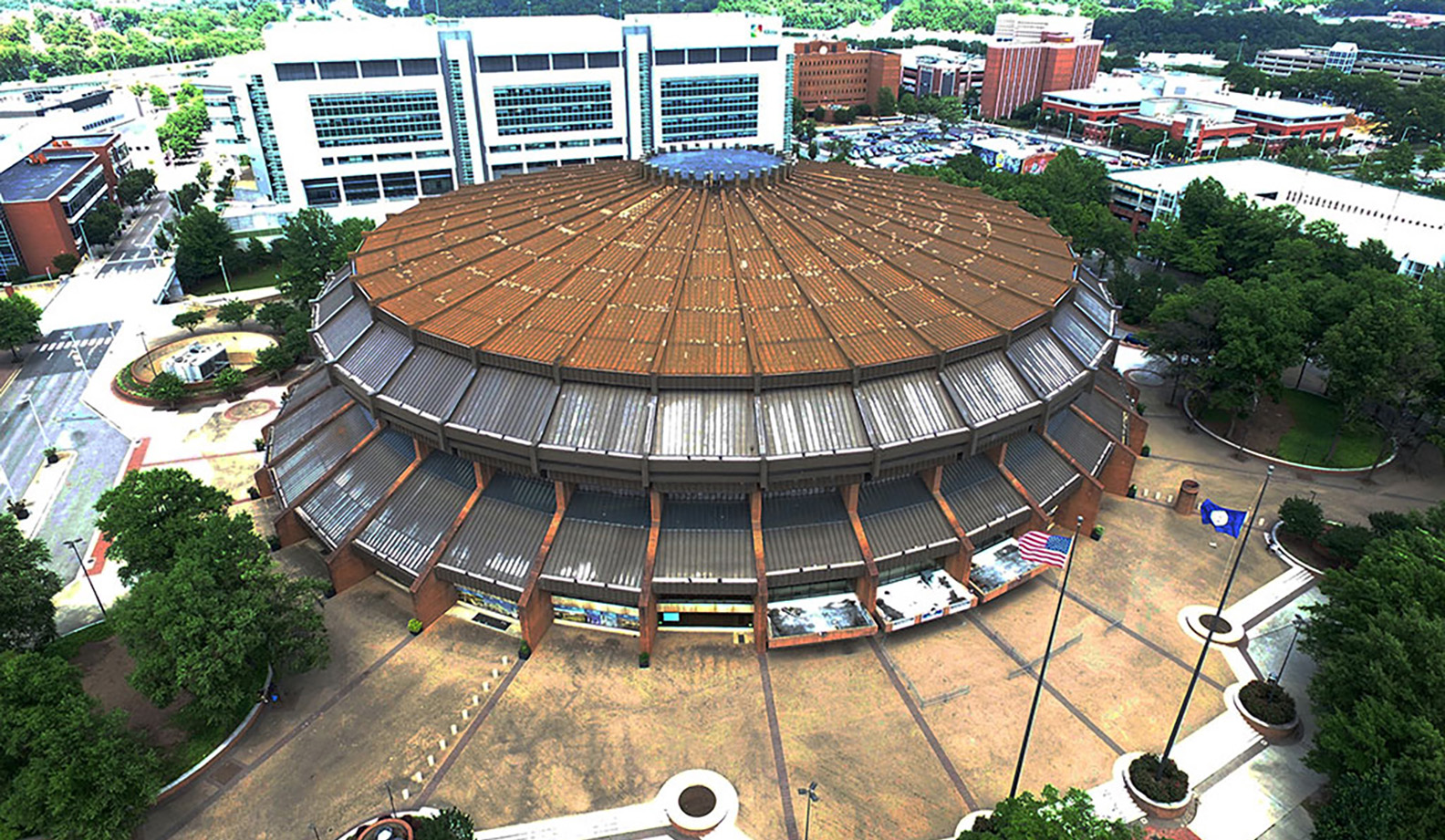 The Richmond Coliseum has quite a storied past but the shuttered arena is slated to be redeveloped. (BizSense file photo)

The GRCCA’s side is being led by a hotel taskforce made up of deputy administrators from the represented localities, along with Richmond Region Tourism’s Jack Berry, Venture Richmond’s Lisa Sims, Richmond Economic Development Director Leonard Sledge, and city planner Maritza Pechin, who’s serving as project manager as she’s doing on the Diamond District project.

Heading up the taskforce is Brandon Hinton, a deputy county manager for Henrico who chairs the GRCCA’s finance committee. In the RFI announcement, Hinton called the convention center “an enduring testament to the power of regional cooperation.”

“Jointly owned by the city of Richmond and the counties of Henrico, Chesterfield, and Hanover, the Convention Center adds tremendous value to the entire region, both in its role as an economic engine and as a cornerstone for our reputation as a thriving visitor destination,” Hinton said. “Even so, a headquarters hotel has always been the missing link to fully maximizing this incredible facility’s potential.”

The announcement also included comments from Sledge and City Council Vice President Ellen Robertson, who was quoted as saying: “Now is the time for Richmond to reinvigorate this part of our downtown to be a more vibrant destination for innovation, residential life and tourism.” 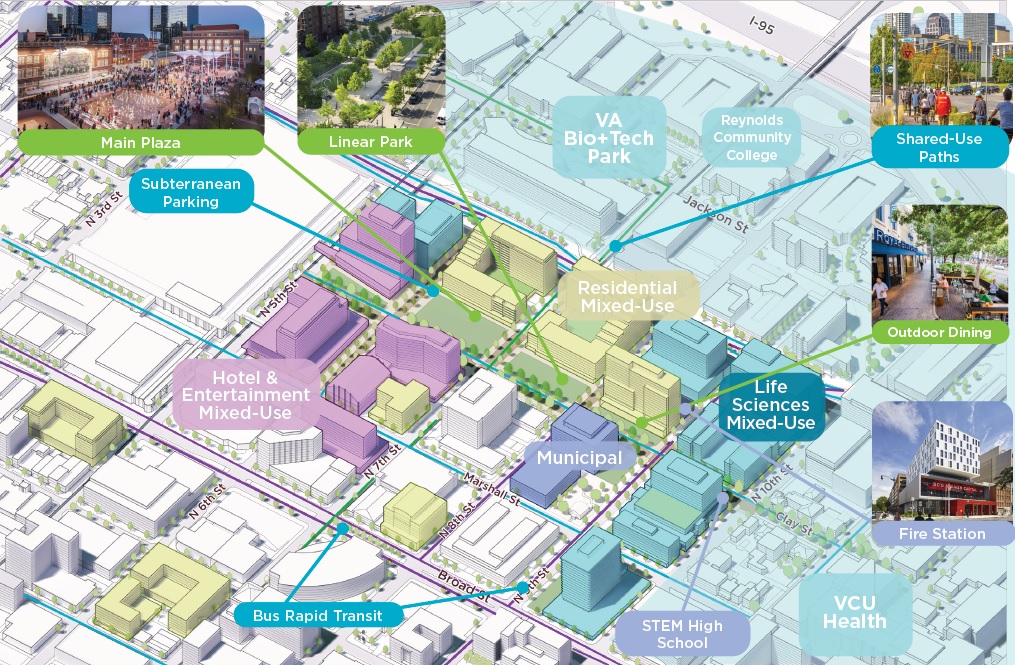 A conceptual map of the city blocks and properties involved in the city’s City Center plan and their potential uses. (Courtesy of city documents)

Added Sledge: “All of the pieces are in place to position the redevelopment of the Coliseum site into a mixed-use, hotel-anchored development.”

Responses to the RFI are due Dec. 20 by 2 p.m. A site visit for development teams is scheduled Nov. 29 at a location to be determined. The full RFI document and additional information can be found on the city’s project webpage.

Responses are to be evaluated based on evaluation criteria spelled out in the RFI and by a panel comprised of EDA, GRCCA and city representatives.

A shortlist of teams to be invited to respond to a request for offers (RFO) is anticipated to be announced in winter 2023. The RFO would be released around that time, and a development team selection could be made that spring.