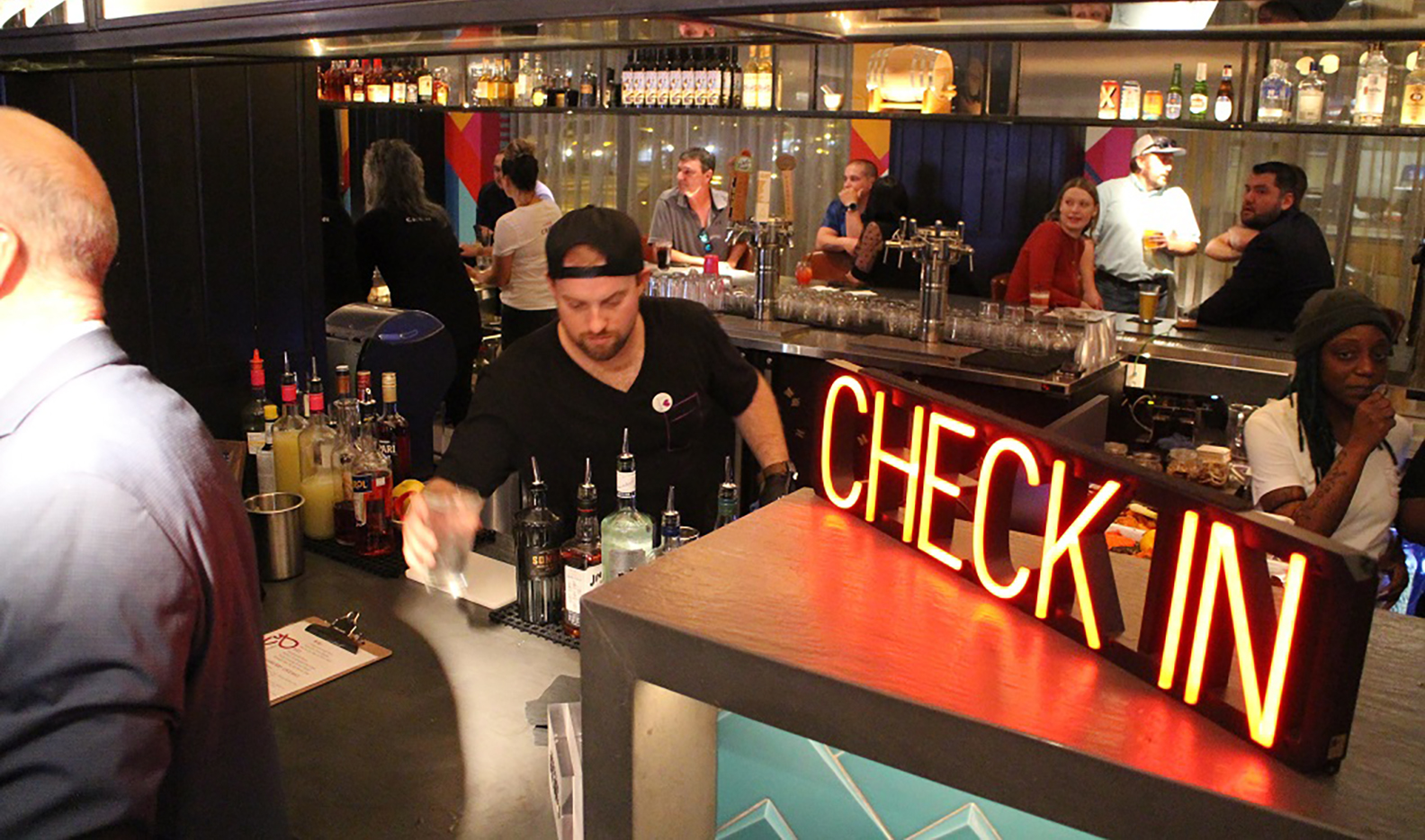 The bar at Richmond’s Moxy hotel doubles as a check-in option for guests. (Jonathan Spiers photos)

Six years after announcing the project and three years after work started in earnest, the area’s largest hotel operator is ready to open its newest property with a new-to-market brand.

Shamin Hotels has finished work on its Moxy hotel at 501 E. Franklin St. The 100-room hotel in downtown Richmond is set to open Friday.

A newer Marriott brand, Moxy is targeted to the Millennial demographic and described by Shamin CEO Neil Amin as “bar-centric.” Guests can check in at the hotel bar, trade notes with other guests and take room art with them when they leave. Rooms include tech-enhanced features and can be rearranged and personalized. 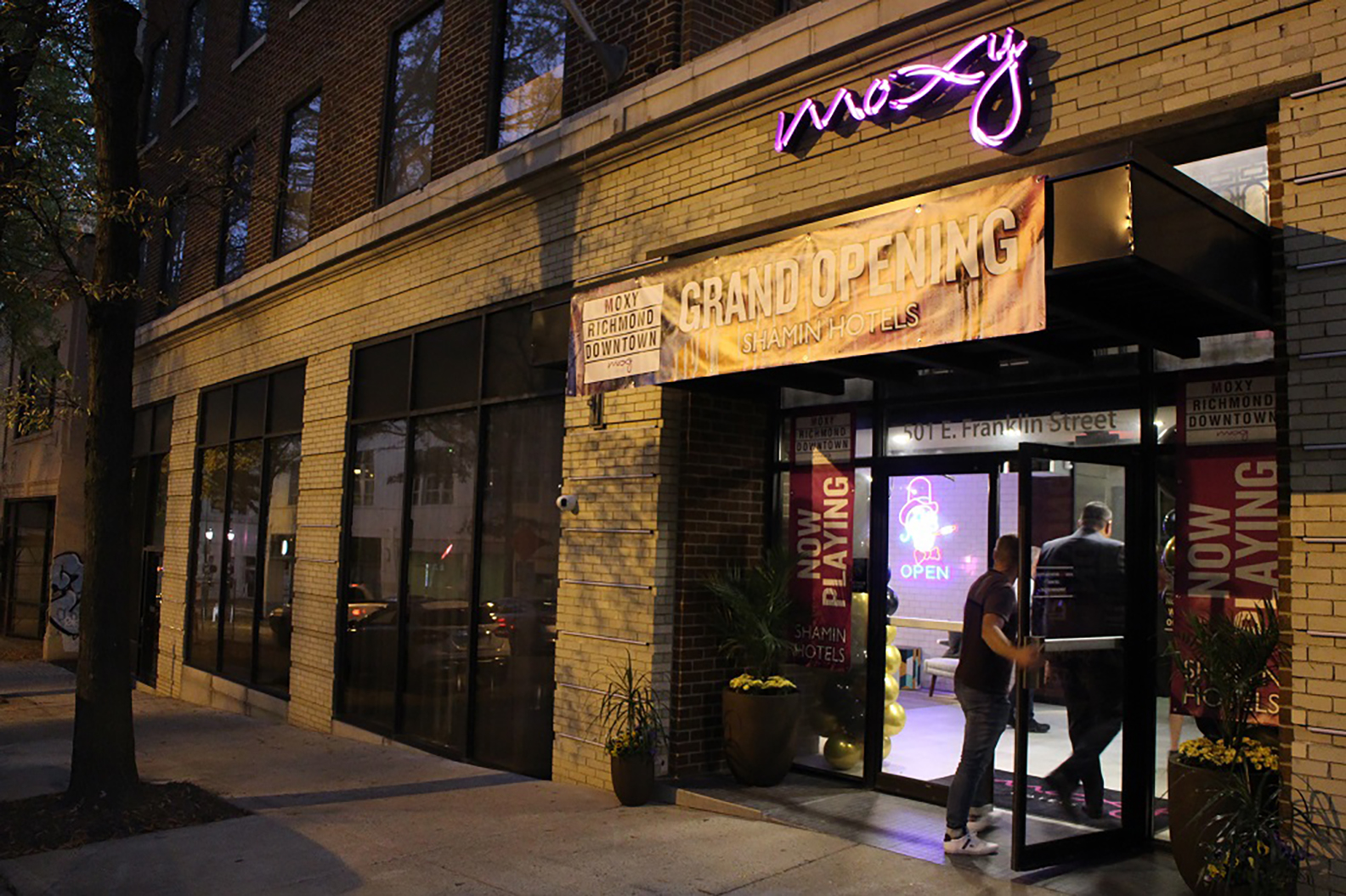 The hotel fills the eight-story former office building at Fifth and Franklin streets.

The opening marks an end to a six-year process that started with Shamin buying the eight-story former office building for $2.5 million. The company was the winning bidder in a 2016 solicitation put out by the Richmond Economic Development Authority, which previously owned the property.

Work to rehab and remodel the century-old building didn’t get into full swing until about three years later, with a city building permit awarded in fall 2019. Shamin had initially aimed to start construction in early 2017. 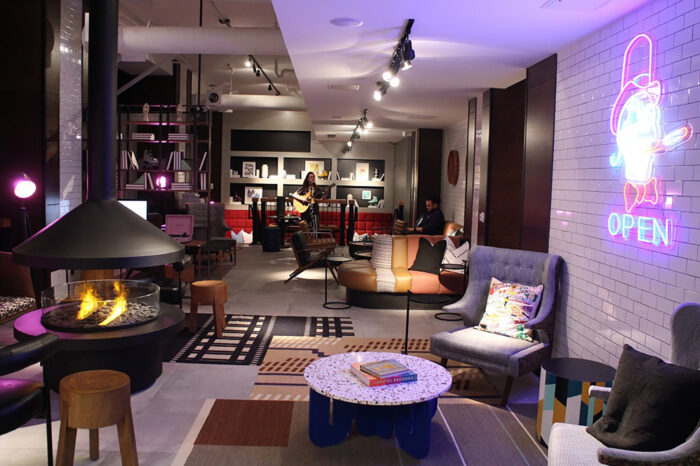 The hotel lobby features a fireplace and sitting areas.

Amin said the delay was due to multiple revisions to the project, which involved historic preservation tax credits.

“The building is located in the (Fifth and Main Downtown Historic District), and we were focused on striking a balance in terms of maintaining the historic fabric of the building while providing a modern boutique experience that Moxy is known for,” Amin said.

“This required many adjustments to the plans, and we ended up submitting seven revisions to the Department of Historic Resources and to Marriott International. As we continued to add unique features to the hotel, the cost increased,” he said. 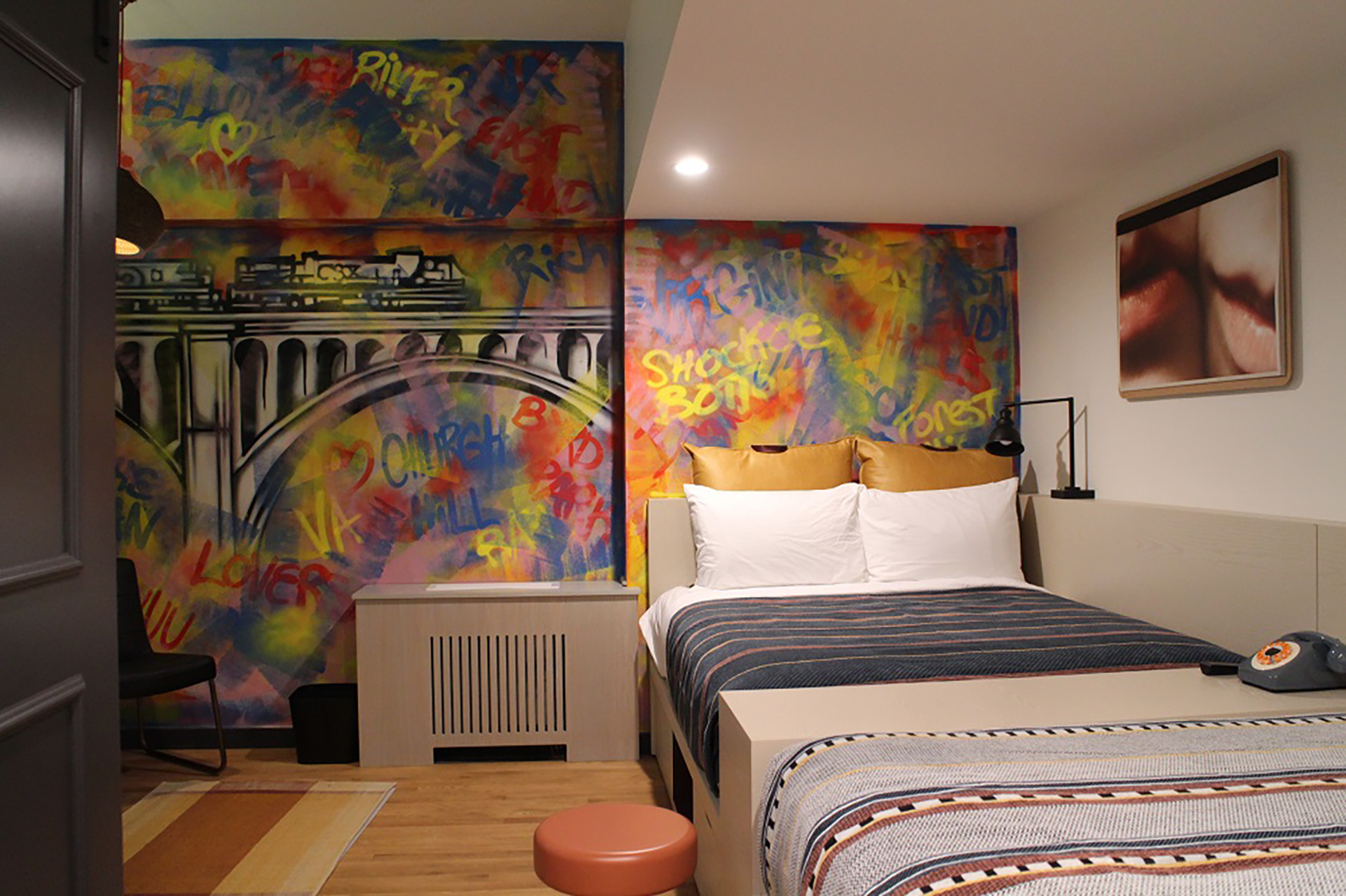 One of the hotel’s dozen or so windowless rooms with murals by Richmond artist Hamilton Glass.

Amin did not share the final cost of the project.

Built in 1916, the Chicago-style building at the corner of Fifth Street was the first commercial structure built on East Franklin Street, according to a description of the Fifth and Main Downtown Historic District that’s listed on the National Register of Historic Places.

The building’s interior was remodeled to create the 100 guest rooms and community spaces, including the bar and lounge area and amenities including a fitness center.

The hotel shares part of an adjoining parking deck that’s owned and also used by Fifth Street neighbor Second Presbyterian Church of Richmond. Because the six-level deck adjoins the hotel’s south wall, about a dozen of the rooms were designed with no windows. 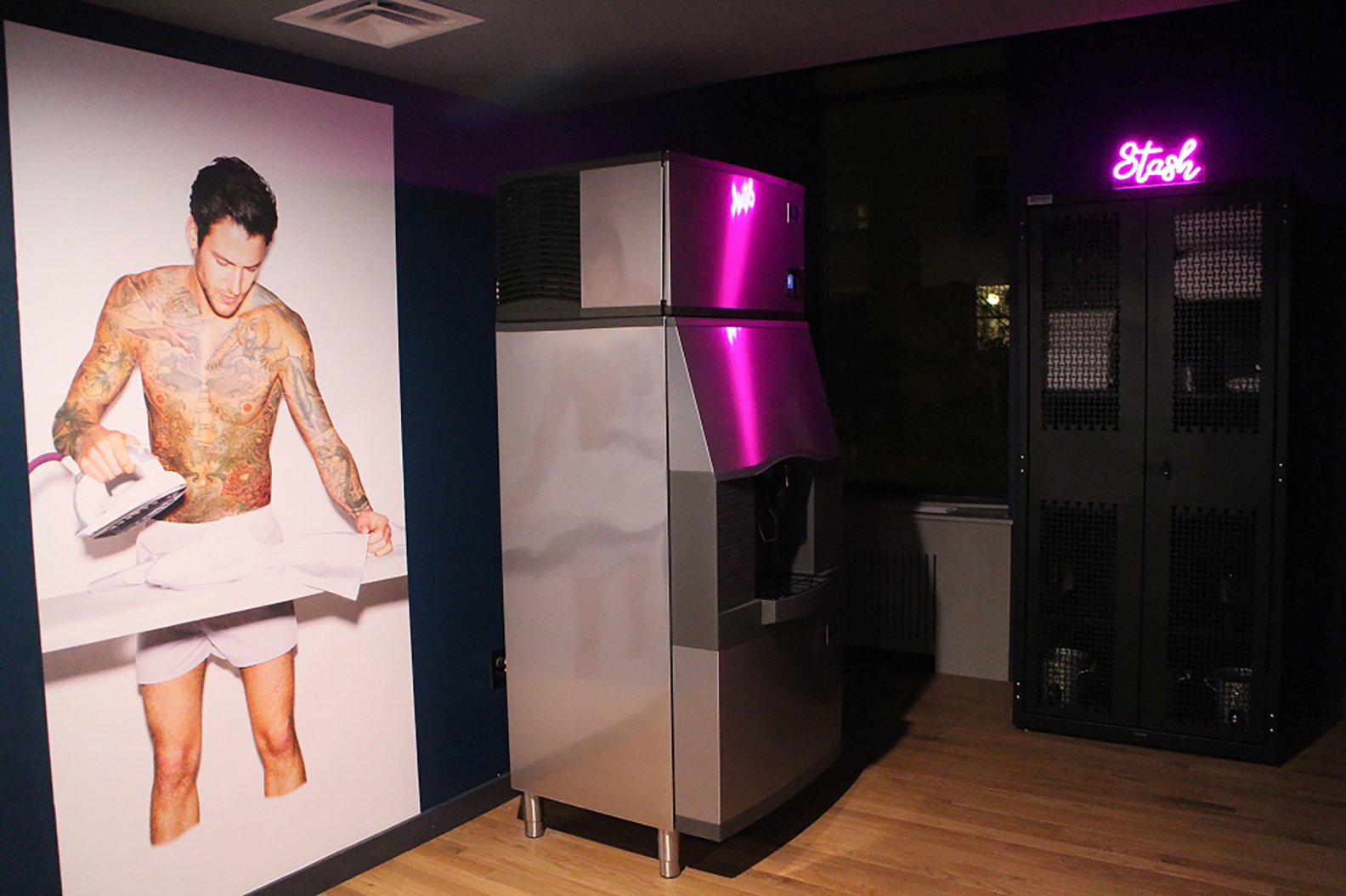 Room rates listed on Marriott’s website for an overnight stay this weekend ranged from about $285 for a windowless room to $330 for a standard room with queen-sized bed. Amin noted that daily rates would vary.

While the project took longer than initially expected, Amin said its duration did not impact the hotel’s described “trendy” design. 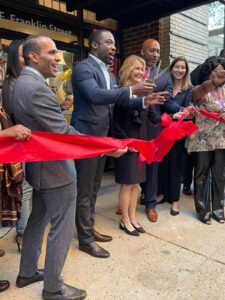 “Moxy is one of the hottest brands in the industry at the moment (and) continues to attract a wide range of travelers who want a playful and stylish experience. The project was continuously updated to reflect the brand’s current design,” he said.

The hotel was designed by architect Michael Sweeney, and New York-based Celano Design Studio was the interior designer. Chesterfield-based North South Construction was the contractor on the project.

The hotel is just a block from Shamin’s headquarters in the Richmond Times-Dispatch building at 300 E. Franklin St., which it bought in late 2019. Shamin had previously been based in Chester.

I am so excited for Richmond to have this hotel! I’ve stayed in Moxies in Oakland and DC and they were both so unique and comfortable. Good on Shamin!

We stayed in a Moxy in Boston and had a great experience. I’m glad Richmond is finally open. It’s a great addition to the neighborhood, and I can’t wait to see more of the design details. Kudos to Shamin for sticking it out.