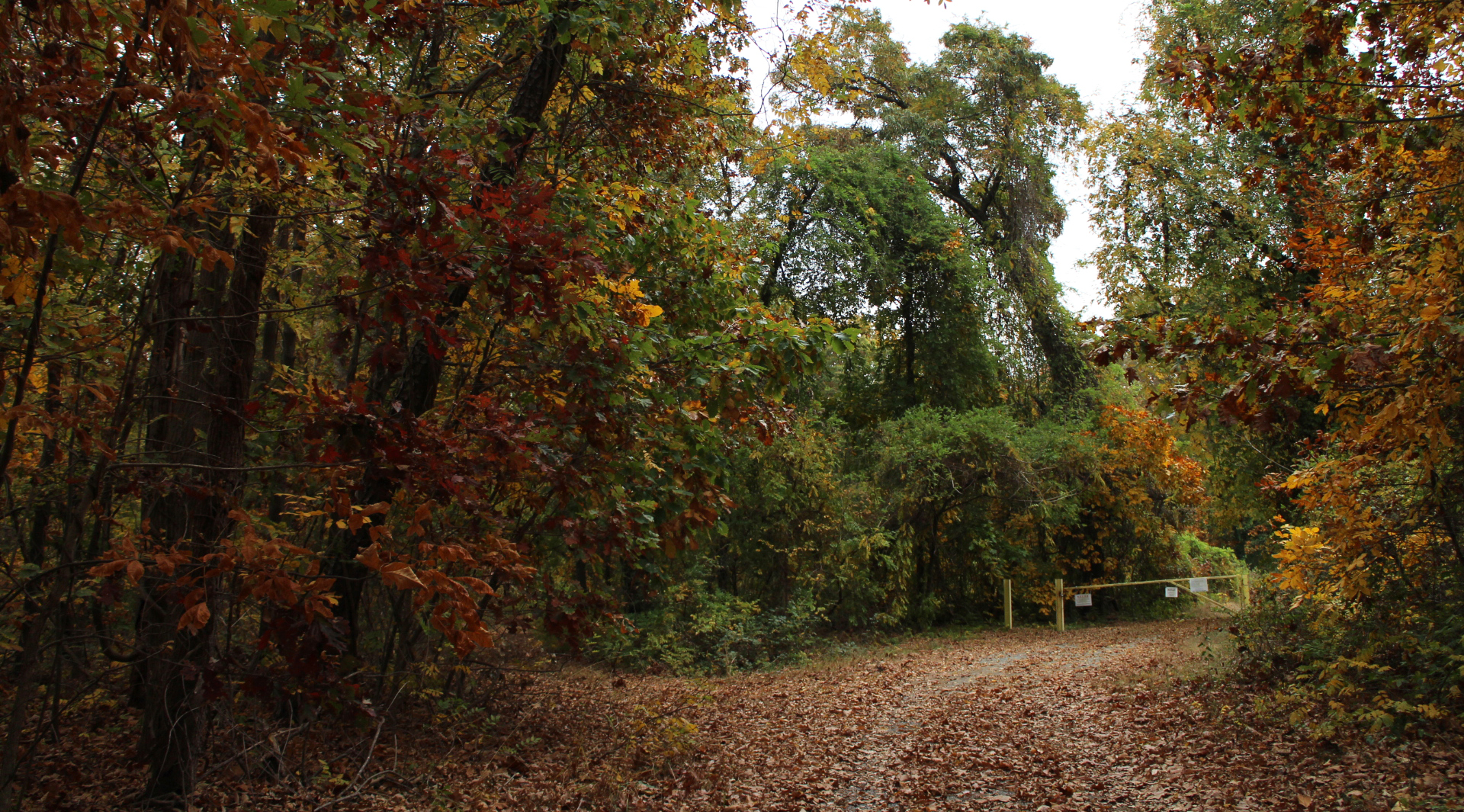 Hundreds of new apartments are slated for the Bon Air area of Chesterfield County as part of a Deep South developer’s first project in the local market.

Birmingham, Alabama-based Pivotal Residential is planning a 324-unit project at 1145 Old Bon Air Road, according to documents recently filed with the county.

The project would sit on 31 wooded acres and span about a dozen buildings about two miles southwest of the center of Bon Air.  The firm is seeking to rezone the land in Chesterfield to allow for it.

Pivotal was founded earlier this year and states on its website a goal of developing high-end residential communities.

The company’s rezoning application shows that five townhome-style buildings are planned on the northern part of the property, while four larger apartment buildings would rise on the plot’s southern end. It’s unclear how many stories the various buildings would reach. 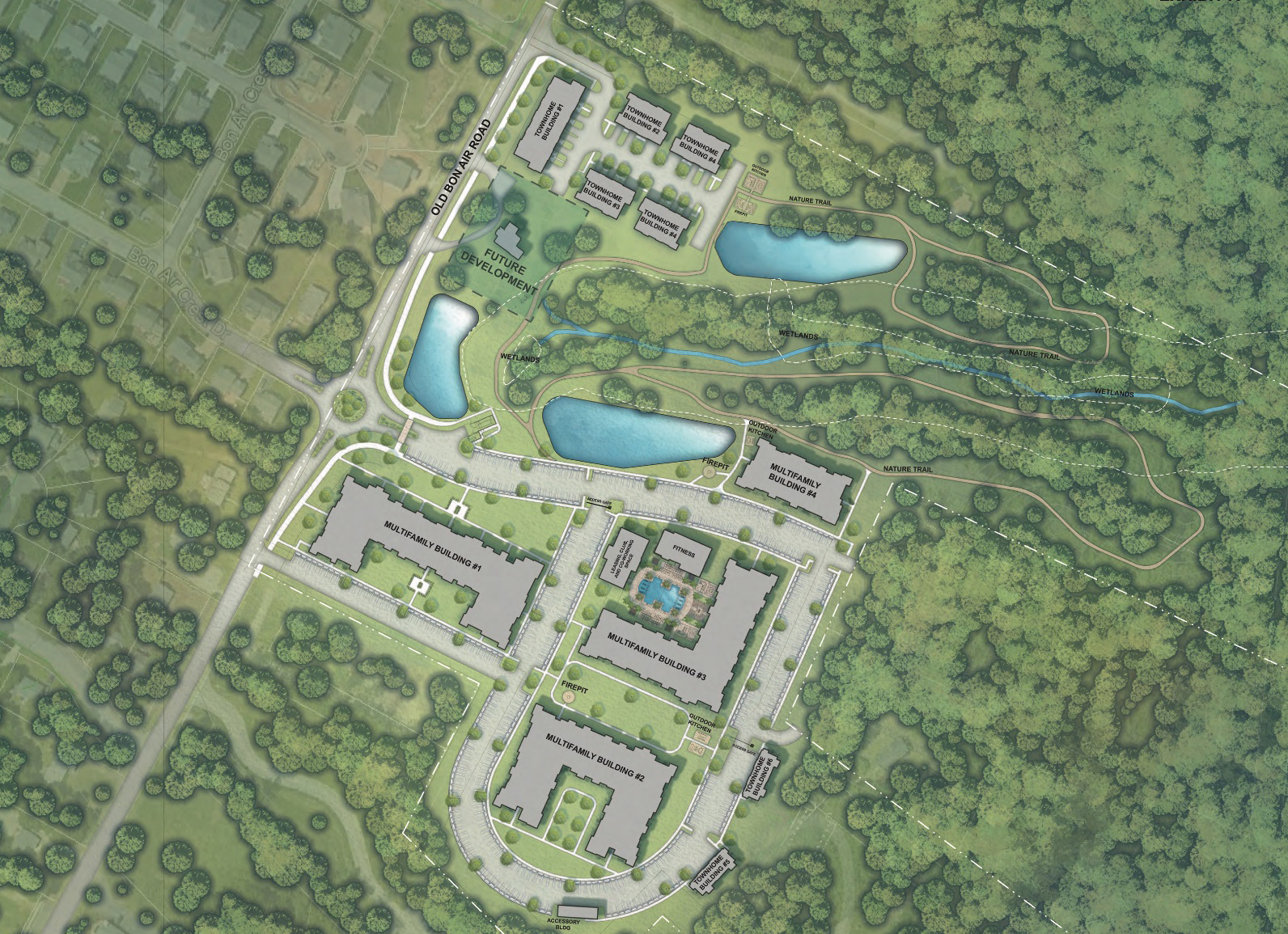 The 324 planned units would be spread across nine buildings. (Courtesy of county documents)

Pivotal’s application states that the dwellings would be market rate and marketed towards residents of all ages.

The project’s planned amenities include a coworking space and gym, as well as outdoor features like a pool, ponds, nature trails, outdoor kitchens and surface parking spaces. Pivotal says in its application that the site plan will focus on pedestrian walkability.

Ohio-based Burgess & Niple and Alabama-based Fifth Dimension are listed as the project’s architects.

The 31 acres the project is planned for is split across 12 parcels owned by private individuals, county records show. It’s unclear whether Pivotal has the land under contract. The dozen parcels were most recently assessed at a combined $1.3 million.

Pivotal’s rezoning application is not yet listed on the agenda for any of the Chesterfield Planning Commission’s upcoming meetings.

Barthol has a contract to purchase the land. Burgess & Niple’s Virginia office is the engineer, led by Dave Barthol. Bruce Commercial is the broker. To the south is the huge trailer park and the Bon Secours Hospice Center and to the rear is the state boys correctional facility. To the north is land zoned for medium density residential use, i.e. townhouses. The land denoted as “future development” is to remain with the sellers who are descendants of the slaves who were given this property upon receiving their freedom after the Civil War. The ravine draining the property will be… Read more »

How will the “tiny” 2 lane street of Old Bon Air Road support the influx of new traffic?

It appears that the additional lanes for the signaled interchange only need to be extended another 600 feet to reach this development.

It’s a 2 way street. I would assume not everyone will come from Robious. If you’ve ever driven on this road in the mornings or evenings you’ll know what I’m talking about…

Oh, I am quite familiar, unfortunately, but most of the traffic is completely through traffic (including myself). The issue is the intersection of Rockaway and Buford which needs improvement regardless. Most of the flow seems to be to/from Chesterfield Town Center area so this being on that end of Bon Air may lessen the impact considerably.

I own 1161 and 1153 Old Bon Air Road. I was harassed and stalked to sell my property. Now these individuals are attempting to build over an easement and block my access to my home. Moreover, rezone the property so that my taxes will increase? I am fighting this over development! No one care unless YOU are being directly affected!

I mean, you bought knowing you had an easement………

The land has been in my family for 100 years and an easement was also legally written.

The information that you have provided is not fully accurate.

Wasn’t there a landfill here at one point in the past?

Yes, the old Bon Air landfill is the green area south of the detention center. It’s the kinda circle you see on the map.

If/when the developer excavates around the old landfill site what kind of negative repercussions may occur?

You’ll be protesting alone with no impact, get with the times nimby troll.

Hey man… Do you have mental trigger issues? I told you I’m not trolling but you insist. You’re not showing any nice conversational skills. I’m sure the mods here will see this and delete some posts. You are just spouting no facts whatsoever unless you have actually explored the property. BTW, I’ll probably be dead when the detention center is closed and whatever process starts. In the mean time, me and plenty of others that I meet out there will enjoy our time. Have a pleasant evening.

The development will not reach that far. it’s purposely closer to the road.

Yes, there was a landfill.

If I’m not mistaken I believe Michael Ramsey of Pivotal was involved with The Jamestowne Apartment Flats at Semmes and Cowardin in Manchester with Liv Development.

Good news, now they just need to knock down the Juvenile center and make space for more SFH developments. Bon Air is on the rise and it will become the fastest appreciating south side market in the next 5 years.

Man, you are very wrong. Have you hiked around there? It’s too beautiful to add homes there. The terrain is very hilly and Powhite Creek wraps around it.

Beautiful with no purpose. Drive 5 minutes to Pony Pasture and enjoy that. Glad to see the area moving forward with improvements with more housing!

Build, build and build. Another with that great mindset.

Another nimby with no forward progression, out with the old!

Agreed, absolutely no reason for Bon Air to stay in the past.

“Beautiful with no purpose.” Bob, what is wrong with you?

He probably has no clue. I love and live near the city but if you destroy a property like this with homes and worse, I just don’t understand some people.

Wild how many NIMBY boomers are downvoting you. Guess we can’t have affordable housing in this city because empty plots of land are just so darn beautiful.

“NIMBY boomers”… that’s hilarious in this case but so prevalent in other areas. Do you and have you lived in this area?

@Henry as a matter of fact, yes, I am a Bon Air resident and have lived here for 5+ years. Nice attempt to gatekeep though!

You didn’t even understand my first sentence in my response to you. Do I actually have to explain?

Not really, that would require me considering your opinion interesting or valuable.

I really hope Chesterfeild County asks for a sidewalk or a bike path along Old Bon Air Road. Powhatan County is getting 1,600 feet of sidewalk from a 32 apartment project.
So under that formula at 50 feet a apartment unit Chesterfield should be getting 16,200 feet of new sidewalk for Old Bon Air Road. But this road does need shoulders and turn lanes along it.

Agreed – that would make the area even better than it already is. Excited for the future of Bon Air!