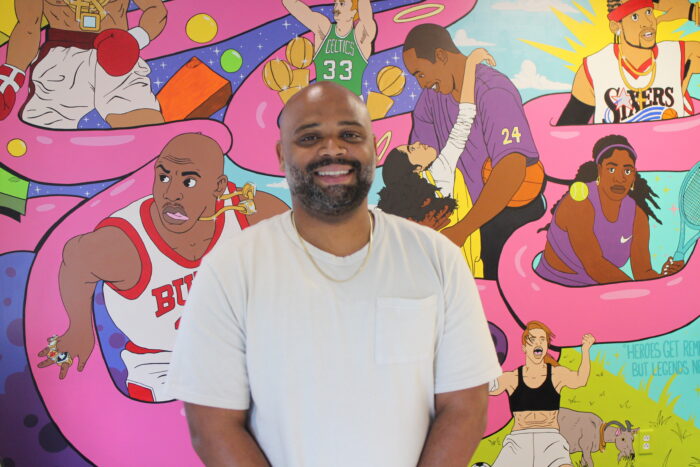 Jordan Muse at The Martin Agency, in front of a mural depicting one of his heroes, Kobe Bryant. (Jonathan Spiers)

With a last name like his, one might think Jordan Muse would have followed it to a career squarely focused on the creative side of advertising.

But when you learn that the Muse he’s following is his dad – industry groundbreaker Jo Muse – it becomes clear why he gravitated to executive and management roles, bringing to them his own touch of creative inspiration.

Following the lead of his father, whose former Los Angeles-based agency Muse Cordero Chen was the first minority-owned firm hired by Nike for its “Just Do It” campaign in the early 1990s, Jordan Muse has found his way into the leadership ranks at The Martin Agency, where he’s approaching his fourth year after a decade at Wieden + Kennedy in New York and Portland, Oregon.

At Martin, Muse was promoted to managing director and head of account leadership after two years as an executive-level group account director, serving as the business lead for the agency’s Buffalo Wild Wings and DoorDash accounts.

Muse, who turned 41 after he was nominated by a mystery admirer, was inducted this week at a ceremony in New York. BizSense sat down with him to discuss the recognition, how he adds creativity to his management work, and why his first job ended with his dad firing him. Below is an edited transcript:

Richmond BizSense: Congrats on your recognition. How does it feel to receive it?
Jordan Muse: I never really have proactively pushed for these recognitions. I always see proof in doing the job and I find enjoyment out of actually doing the work. AAF reached out to me and told me that somebody had nominated me for this recognition. It was one of the first times in my career where I felt like maybe this is something I should try, and if it doesn’t go anywhere, so be it.

RBS: You were promoted two years ago as Martin’s head of account leadership. What does that role entail?
JM: I’m in charge of making sure we’re hiring the right people in account leadership and providing them with tools and skills to succeed. I also look after a few accounts directly.

I started in the business in account service, but I have a passion for creativity. That’s the main reason why I worked at Wieden + Kennedy for 10 years and I’m here at Martin. I’ve always considered myself a creative thinker, but my skillset and my development’s always been on the account side: more business-driven, more partnership and client-facing. 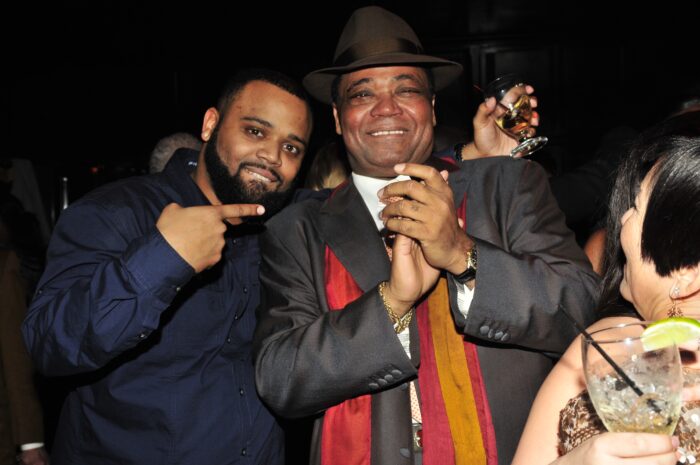 RBS: How did you get into the business?
JM: I grew up watching my father as an entrepreneur. He didn’t aggressively push me to get into advertising; he just exposed me to it. I fell in love with the creativity, with the ability to make something out of nothing and the rollercoaster of the creative journey.

I went to college for more of a business career, and I took an intro to advertising class. What they were teaching was all knowledge I already had and it came very natural, so of course it made me take a step back and think about my path, and then obviously taking a look at my father’s business and following in his footsteps.

RBS: Your first job after college was at your father’s agency, which by then was called Muse Communications. What was it like working for your dad?
JM: I worked there for about a year and half, and then he fired me. It was probably one of the best decisions that was ever made in my life. It was tough at the time, because I didn’t have a job, but I was getting a little too big for my britches working at his agency.

Because my name was on the door, I kind of felt like I had the latitude to say some things that maybe a junior person wouldn’t. He witnessed that and felt like I would be better learning from others, so he fired me and pushed me out, but also coached me on how to get a job, and I was lucky enough within six months or so after that to get a job at BBDO.

RBS: Your dad just fired you? How did he do it?
JM: Like most things in my life, it was done in a cool, calm manner, I think at the breakfast table. I was also living at home, so it was a little bit of a double-whammy for him. I think he realized, “This is my time; if I don’t get this kid out of my house or out of my office, it’ll never happen.”

All my stuff that was in my bedroom was in the garage. I was told it was time for me to leave the house and it was also time for me to find a new job. Once he fired me, it gave me the opportunity to really try to be a part of the places I wanted to work at. I tried to get into Wieden, wasn’t successful, so I went to BBDO.

RBS: You eventually made it to Wieden + Kennedy, which your dad’s agency had worked with on Nike in the ‘90s. What work were you involved in that people would know?
JM: My first account there was Old Spice. I worked on a lot of the iconic Old Spice work: “The Man Your Man Could Smell Like,” Isaiah Mustafa, the guy on a horse, I worked on that. Another big campaign was when they signed Terry Crews, I was very instrumental in that work, choosing him and signing him as a talent.

Then I left and went to Nike, and on Nike I worked on huge campaigns with LeBron James, his return back to Cleveland. There was a Hubble commercial we worked on together. Kevin Durant “The Baddest,” as well as “Some are Serious” with Kevin Durant. Pretty much anything that came out of Wieden + Kennedy on the basketball scene from 2011 to 2015, I played a role in that. 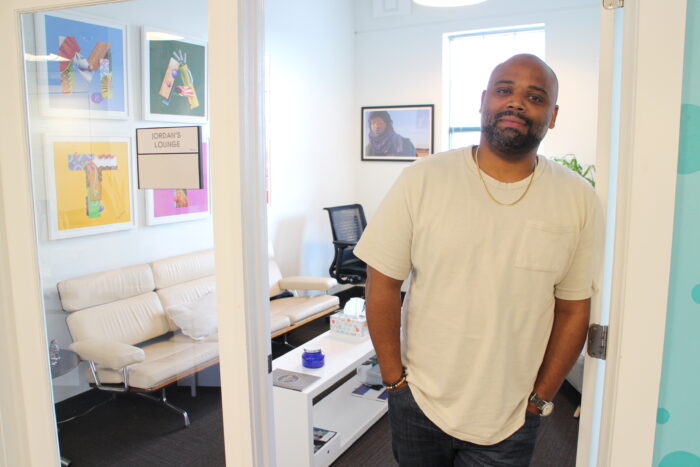 Muse is completing his fourth year at The Martin Agency, where he is head of account leadership.

RBS: What brought you to Richmond and The Martin Agency?
JM: It was 10 years, and I’d come to the realization that I understood Wieden + Kennedy really well in the way that we did things. However, if I wanted to be an agency leader and maybe follow my father’s footsteps and start my own agency, I had to learn other ways of doing it, to make me a stronger leader and to really pressure-test what I was learning in the past 10 years.

A recruiter for Martin reached out, and I met Danny Robinson. I had lunch with him in New York, and then shortly after that I met Kristen Cavallo.

Kristen’s way and the way we’ve approached things here at Martin is very different than my experience at Wieden. She was a different leader who was willing to give me a peek into the backdoor conversations and being part of the leadership. That to me was everything.

RBS: Is that the end-goal for you, starting your own agency like your father?
JM: I want to be an agency leader. Right now, I’m part of management and leadership. At some point in my career, I want to be “the” person. If that is being a CEO at an existing agency, cool. If that is starting my own thing and having partners and being part of that leadership team, I’m good with either. 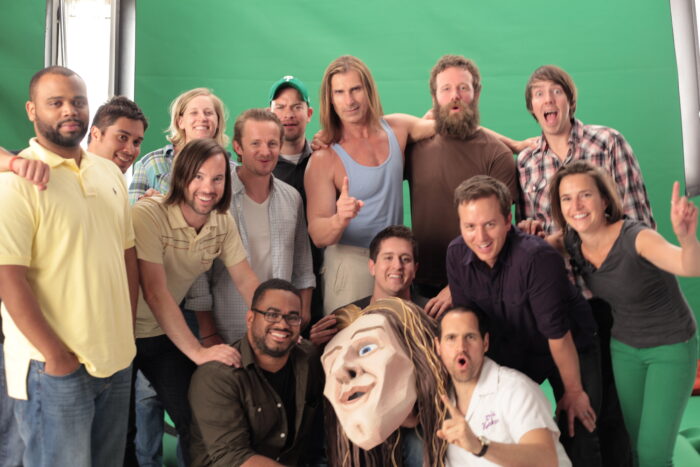 RBS: How do you keep up creativity in your management work? Are their sources of inspiration you go to keep a creative mind or approach to your work?
JM: It’s so important to disconnect. It’s so important to have boundaries, so I make sure I have those boundaries and I have a switch. Early in my career that switch was always on. Now I find myself having to turn it off for me to really get inspired, because there’s so much thought in leadership, you’re stretched to do so many different things that you can spend your entire time thinking about those things. It takes discipline to shut that out.

Sports is a huge inspiration for me. Music, film. Over the last year I have gotten into plants a lot and studying cultivation and the unique tropical plants and how I can fill my house with them. And I try to spend as much time with people who aren’t in the business. That’s difficult, because a lot of the relationships I have are connected to the business, but just trying to immerse myself in real life as much as possible. You can find yourself getting sucked into the ad world if you let it.

RBS: If you could ask any person you look up to for advice, who would that person be and what would you ask?
JM: If I take my father out of the question, Kobe Bryant is an inspiration to me. I worked with him when I worked on Nike. He was uber-focused, a creative mind, a leader, but he was so personable. He would approach our interactions just the way he would approach a conversation with one of his teammates to win the game, and I appreciated that drive and the fundamentals of the day-to-day.

My question would probably be around maintaining an edge. I think in life you can find comfort in success, and he always kept an edge and was always pushing for more, regardless of what he accomplished. He always had a chip on his shoulder. How did he do that and what was his mental approach to continue to have that chip on his shoulder no matter what he accomplished in life? I’m curious how you keep that fighting edge.