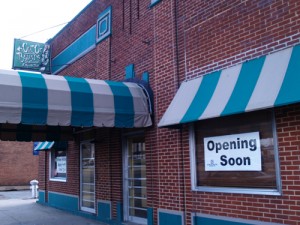 Out of Bounds Restaurant and Sports Bar has sat lifeless on Broad Street for just about a year, but a new restaurant is in the works for the property.

Interior renovations have been underway for the past few months, and manager Rafid Stanley said they are hoping to open in March as Gus’s Bar & Grill.

The owner is Josephine Flemotomos, sister of restaurateur Johnny Giavos [of Gibson’s Grill and Kitchen 64]. The new restaurant is her first and is named after her father, Stanley said.

The building is owned by the Giavos family.

Stanley said they want to cater to more of a dining crowd, so the pool tables and dart boards have been removed. But they are keeping other sports bar amenities: Stanley said they recently put up new televisions for watching games.

“It is still a sports bar but with much better food, not just fried wings and chicken tenders,” he said.

The menu will offer items with a touch of Mediterranean and Greek flavor, Stanley said. The pub has started hiring and plans to have about 30 employees.

Good to see! Didn’t frequent Out of Bounds much, but was a regular in the 80’s at Barry’s. Looking forward to having a beer there again!

I met the owners last week and these “guys” have got their act together. Huge flat screens all over the restaurant, very clean, plenty of room, great menu and cold beer! There will be something for everyone here….I hope they’re open for the NCAA b-ball playoffs. Steve B.

I hope they fill the place with smokin hot greek waitresses and bartenders. Oh Yeah.

Just in time for softball season at Parker Field—-woohoo…….please keep OOB’s .25$ wing tradition and you will get slammed with thirsty softball players every thursday night starting in April!!!!

To respond to Justin – there is one server in there that will knock your socks off. She is smoking hot – don’t think she is Greek though. But definitely makes the trip worth it. Didn’t seem too interested in me, so better luck to the next guy.