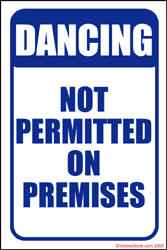 You can have a drink, and watch the live entertainment at County Rib & Ale House in Chesterfield.

But you can’t dance.

According to the Midlothian Exchange , the five restaurant investors received summons in early March for two illegal dancing incidents in February.

There is a county code in Chesterfield that requires restaurant owners to acquire a $25 night club permit to allow dancing along with serving alcohol and hosting concerts. The permit can be denied for a variety of reasons. County Rib & Ale House has been denied because police are frequently called to the restaurant, one of the owners said.

A nearby Mulligan’s restaurant was also cited last month for allowing dancing without a nightclub permit. Both restaurants have “No Dancing” notices posted on the front door.

A major with the Chesterfield County Police Department said the department had been called to County Rib & Ale more than 50 times since last January, mostly to break up fights and other disturbances.

The restaurant owners and musicians  say the “footloose law” threatens their livelihoods.

Patrons have started a petition to change the law.

Being able to deny a dance permit is almost as arbitrary as having one to begin with. We should really have permits for everything, along with a list of reasons to deny them and then we can all sit back and reflect on our American Freedom. This restaurant is employing people, paying sales tax, but unable to make simple decisions without the interefence of law enforcement. How about telling them to hire a bouncer or two and let them be. Just a suggestion.

I respect Chesterfields decision not to approve the nightclub permit for these 2 places. I put it back on the owners. You don’t have the police come out to your establishment 50+ times in a 3 month period. The owners should have done something after the 1st call to make sure they have what they need to have in place. Like extra staff.

Geez, whats next? I don’t see how the dancing has anything to do with the fights. I can’t believe this is even an issue and a permit is needed to DANCE?? Come on Chesterfield, I know the budget is tight, but you want permits for everything. I bet if they paid enough they would get one. I don’t live far from these places and my property tax went up over 8% – the county must have it our particular area.