Frank Kollmansperger says his business is so mundane that it’s interesting.

He’s talking about the business of parking, an industry most of us participate in everyday without giving it much thought.

Kollmansperger bought Entry Guard Systems seven years ago, not having ever paid much attention to parking either.

“You drive up to a garage and the machine spits out a ticket,” said Kollmansperger. “It’s just not something most people think about.”

Locally-based Entry Guard installs and maintains parking control systems that allow lot owners to control who comes in and out and – ultimately – the revenue. And the company is now trying to convince the mundane industry to embrace a new technology that could save money and energy.

Entry Guard is trying to sell lighting systems for garages that use wireless systems of sensors and motion detectors to turn lights on and off only when there is traffic nearby.

On any given night, say at 2 a.m., every parking garage in downtown Richmond is likely fully lit, Kollmansperger said.

“They are using a lot of electricity.”

The company that makes these lighting systems, called Limelight, estimates that every year 6.5 billion kilowatt hours are wasted in parking garages. That’s $782.2 million a year or $2 million a day, Limelight claims on its website.

The Limelight system at times of low activity in a garage puts fixtures in single bulb mode until the sensor senses motion nearby and turns on to full operation. The systems also can detect when lights are broken or burned out, sending a message to attendants. 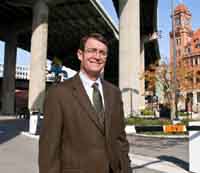 But so far, Entry Guard hasn’t had much luck selling the systems, Kollmansperger said.

“We have a lot of proposals out but have not installed one yet.”

It may be a tough nut to crack because parking lots make money without worrying much about leaving the lights on.

The Richmond parking world, like most major metropolitan areas, is controlled largely by parking behemoths such as Standard Parking, Central Parking and Lanier Parking, large companies that manage lots and garages for property owners all over the country.

Atlanta-based Lanier, for example, manages 300 parking properties in 40 cities in North America, including 10 of the biggest parking structures in downtown Richmond.

Chicago-based Standard Parking Corp. is publicly traded on NASDAQ and brought in $293 million in revenue in 2009.

Competing hard against these giants are only a few small local companies, including City Parking, a family run business that’s been around since 2004.

David Sharrar, president of City Parking, said the going rate for a parking space in the commercial heart of downtown Richmond is about $120 to $140 per month.

Some of the larger garages have up to 2,000 spaces. And most in downtown’s financial district are sold out from month to month, Sharrar said.

As for Entry Guard’s attempts to break into the local market with Limelight, Sharrar said the technology is exciting, but won’t be an easy sell.

“The challenge is looking into retrofitting older properties with this new technology,” Sharrar said. “It’s unclear right now about what exactly the return on investment is going to be.”

To make matters more difficult, most parking management companies generally don’t have very long-term contracts, Sharrar said. Many are month to month or up to 10 years, neither of which may be long enough to recoup the investment of a high tech lighting system.

And though very few new parking garages have been built recently in part because of the recession, Kollmansperger isn’t giving up on the new technology.

“It’s real estate,” Kollmansperger said of parking spaces. “The owner needs to think about how they are managing that real estate of spaces.”

Entry Guard has seven employees and does business all around the state with the exception of Northern Virginia.
Michael Schwartz covers small business for BizSense. Please send news tips to [email protected]

Very interesting concept. You could also retrofit existing decks with LED lighting and save a bundle on power demands. Anyone notice that local 7-Elevens are retrofitting their parking and signage to LED?

Motion sensors and the like are old technology. The energy it takes to re-ignite the lamps which are mostly metal halide or high pressure sodium is a deal breaker. Why would anyone invest in a supposedly new lighting system with a 10 year payback?

LED is the way to go and it pays for itself in under three years not to mention that the fixtures last from 15 to 25 years. No bulbs to replace, no ballasts to harm the environment, LED is the future of lighting for more than jus garages.

I have been earnestly researching LED technology development for several years and have concluded the technology is not yet ripe for the picking. Hype has drown out the “not ripe” reality. In the mean time High Output flourescent technology has made significant advancements in light quality, lamp longevity, energy efficiency and ballast life. The only problem is that the reality of these tangible / real advancements have been eclipsed by LED promises and hype. Im amazed by the superficial level of understanding the average person has relating to LEDs ability to deliver on their grandios promises. The term too good… Read more »

I want to respond to Luke’s comments. The Limelight fixture actually uses three T8 High Output fluorescent bulbs instead of the metal halide or high pressure sodium lamps that are currently installed in most parking decks. The system can also work with certain LED fixtures although I am not sold on the LED fixtures which are currently on the market.