A local restaurant bought its independence yesterday and avoided becoming a victim of its landlord’s legal and financial problems.

The Empress, which opened for business in April in a West Broad Street space owned by developer Justin French, feared the worst after the bank foreclosed on the property last month.

With the help of family members, Melissa Barlow and Carly Herring scraped together enough money to outbid the bank at auction on the city courthouse steps yesterday morning. 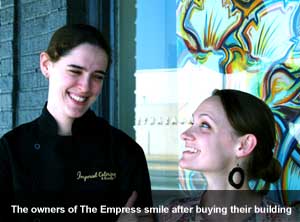 Their winning bid of $280,500 came in front of more than a dozen interested parties.

“We were shaking, but nobody bid against us,” Barlow said, adding that she worried that the other bidders had deeper pockets.

Since French’s business dealings and subsequent arrest became highly public – French’s office was raided by federal agents, and he was soon arrested trying to board a plane at the Richmond airport – Barlow and Herring became concerned. (You can see a run-down of French stories here).

The restaurateurs said they were terrified that they would lose their restaurant if a new owner bought the property with the intention of raising the rent. Herring’s parents even took out second mortgages on their property to help the restaurant find the necessary cash.

When the auctioneer finally said “sold,” Barlow started crying. “I had to scamper away really quick because I don’t like people to see that side of me,” she said.

There was more French foreclosure action yesterday, too. Several other French properties foreclosed on by Paragon Commercial Bank were up for bid as well. Those properties, 2039-2041 and 2047-2049 W. Broad St., were auctioned together and received an initial bid of $200,000. The bank countered back with $900,000, to which there was no response.

Mike Keck, Richmond market president of Paragon, said the bank is never happy when a loan goes down this road.

“We’re in the lending business and not the business of owning commercial real estate, so it’s not a good day for us when this occurs,” said Keck.

The bank will evaluate its options of how to dispose of the properties, which include a parking lot and an unfinished apartment building.

Judging from the crowd that showed up for the auction, larger than normal for foreclosures, there is interest in the properties, perhaps a function of the publicity of French’s situation.

“You can see from the number of bodies that were around at the courthouse that there was interest,” Keck said. “Most of the time, you go to these sales and there’s no one standing there.

And back at The Empress yesterday, celebration was in order.

“We already had a champagne toast when we got back,” Barlow said.

This is a great story and I wish the owners the best. Please show your support by visiting them often! Bravo – entrepreneurial spirits!

Very glad to see this. Chalk one up for little guys for a change. Doesn’t happen
often. I personally plan on going to Empress soon to 1) eat and 2) show support for
their determination and diligence! Good stuff.

BRAVO! congrats to The Empress owners! I too, will be by soon to show support and have dinner!

Congratulations to both of you and your supportive family. As a Business Broker I see too, too many entrepreneurs squeezed out of business due to intractible landlords, over reaching circumstances but your ability to recapture your business and control of your vision for The Empress is a testament to the spirit of small business owners and the commitment it takes to survive, perhaps prosper in this business environment. Your story should gather a broad new clientelle to support your commitment! My wife and aI shall dine with you soon!

way to go ladies! We will be by for dinner and to show our support of your fighting spirit- never give up.

That’s awesome!! We were so happy to see you get the building yesterday. Everyone I talked to was happy for you.