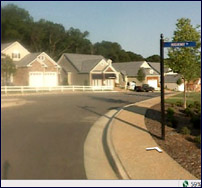 Developer Hank Wilton had a simple explanation for how he came to be faced with a roomful of creditors at the first hearing of his bankruptcy case.

“I bought too much property,” he said.

Wilton, who has overseen more than 30 major subdivisions in the Richmond metro area, has filed for Chapter 11 bankruptcy protection, claiming liabilities around $70 million. (Read an in-depth Q&A with Wilton about how things fell apart in a BizSense story here.)

Wilton personally guaranteed several bank loans and is still on the hook for the balance left over after the banks foreclosed on and auctioned off the properties. Several suits have been filed against Wilton by banks looking to collect those deficiencies.

“I couldn’t keep paying the interest to carry the property, and now it is being taken over by the banks. And I can’t sell it at this point,” Wilton said at his hearing.

According to his filing, Wilton’s assets total $13.9 million and his liabilities total $93.2 million, about $28.1 million of which is owed to creditors with secured claims.

Asked what he could have done to avoid this situation, Wilton said that he would have taken deeper discounts to get rid of excess property while people were willing to buy it and banks were willing to finance the purchases.

The banks to which Wilton owes money to include First Capital Bank, Hampton Roads Bankshares, River City Bank (now part of Village Bank) and Wachovia. Those banks currently hold shares of local real estate firm the Wilton Companies that Wilton pledged as collateral. The Wilton Companies is a separate company founded by Wilton’s father, E. Carlton Wilton, and is separate from his development endeavors.

The value of those shares was discussed at the hearing and was a point of concern for the various bank representatives present. The shares were valued  at $600 a share in the filing, compared with a valuation two years ago that stated that they were worth $1,250 a share.

The banks are currently seeking buyers for the stock, according to Wilton and other sources.

Robert Canfield, Wilton’s attorney, told the trustee that they are close to securing debtor-in-possession financing as part of their exit plan and that the lender would place a lien on Wilton’s assets as collateral.

His property includes his residence in Goochland, valued at $1.8 million, as well as three other properties. Other assets include his remaining shares of the Wilton Companies and his percentage partnerships in various business ventures, including the Shenandoah Golf Club near Charlottesville.

In Wilton’s statement of financial affairs, his 2008 income was reported as $1.6 million. In 2009, it was reported as $429,840. The reduction is largely due to the dividend from the Wilton Companies being reduced by 75 percent during that time, Wilton explained during the hearing.

The bankruptcy filing also included an account of property sold within the past two years. Among them were two very expensive automobiles. In March, Wilton sold a 2004 Bentley Continental for $64,000. In July, he sold a 2003 Aston Martin for $46,000. When asked why he sold the Aston Martin for that amount, Wilton answered matter-of-factly.

“That’s all he would give me,” Wilton said.

10 Country Club memberships? It sounds like he has a really bad case of cool guy syndrome.

10 country club memberships? What a joke. Perhaps if he tried living like a normal human being he wouldn’t be in this mess. Can’t imagine what his contractors and employees must be going through, knowing he was paying dues on 10 country clubs and now he’s stiffing them.

Living large is a common response to wealth created when economic growth is fueled with excessive leverage. Living large is not confined to developers such as Mr. Wilton. Living large was redefined, during the period 2005 through 2009, by homebuyers aggressively seeking “low payment mortgages” without regard to their ability to pay. Livning large is not a crime. I wish Mr. Wilton the best.

In my opinion Hank is a very above board person with a huge desire to succeed. He could have sat at home and enjoyed family money but decided to do more. If the bankruptcy judge/trusty needs to ask how this happened, then we need to let them out of the closet every now and then. This real estate market sucks and if they are Democrats, they can blame themslves.

Watch what you write in here because they won’t publish the truth.

This man is not the snob you think! He is loving and giving to so many, down to earth! He may sound like he has a lot, but he gives just as much back! research how many charity events he has funded! Do you even know how much money he raises every year to help others? He is a loving family man. Don’t hate him because he is smart enough to make that kind of money, he is know differant than you or I. The economy has effected everyone. By the way, all those country club memberships, he joined for… Read more »

No one should be aloud that much rope to hang yourself with.

I have met Hank Wilton personally and he is a very caring man. Everyone makes mistakes in this world so no one should judge anyone. This is his business and I really don’t think it should have made news. This is his own private matter. Don’t bash someone you don’t even know.