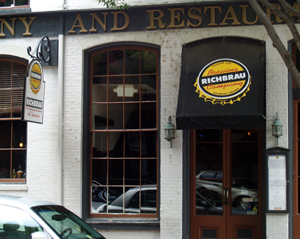 RiverFront Investment Group has signed a lease to take over part of the former Richbrau brewpub in Shockoe Slip. Richbrau went bankrupt in February. (You can read about that in an RBS story here).

The money management firm, which was started by veterans of Wachovia Securities, runs several mutual funds and sells its financial products to other financial advisers.

“Hopefully we’ll be in by next summer and make it one of the coolest, most amazing investment buildings in Richmond,” said Michael Jones, RiverFront’s chief investment officer.

Jones and a handful of other RiverFront founders and principals – including Rod Smyth and Doug Sandler –  formerly directed Wachovia Securities’ investment strategy division. (You can see a video of Smyth on CNBC here.)

But when that company bought A.G. Edwards in 2007, they chose not to move to St. Louis and instead started their own firm.

RiverFront will move about 22 employees from its current location in Arboretum in Chesterfield and will have room for growth, Jones said.

RiverFront is close to signing a deal with an architect to design the interior and has hired Courtney Ludeman Interiors for the internal layout.

Amy de Venoge of Secam Inc., a local real estate firm that owns the space, told BizSense in July that Secam had been fielding serious interest from a few potential tenants, both from restaurants and other businesses. (You can read more about that here).

The 40,000-square-foot space has been dormant since February, when Richbrau declared bankruptcy.

RiverFront will occupy the ground floor and the second floor of the former brewery side of Richbrau. The third floor will remain vacant and undeveloped for now, de Venoge said, and the basement will continue to be occupied by the La Grotta Italian restaurant. The deal does not include the connecting building that housed the Richbrau Tap House Grill. That space is owned by the owner of Sam Miller’s.

De Venoge said there is no firm move-in date as it all depends on how smoothly the construction goes.

“We are just happy that we were able to move forward and get out of the whole bankruptcy entanglement with Richbrau,” she said.

The conversion from restaurant to office space is unusual but not illogical, said Allyson Petty, a broker with Grubb & Ellis|Harrison & Bates, in part because the multilevel layout might have made attracting another retail client difficult.

“I see how that building could be considered somewhat obsolete based on multiple floors,” Petty said. “There are not a lot of new retailers that want to take that kind of space. They want all on one floor.”

Since the space has been on the market, Secam also received offers from parties that wanted to purchase the entire building.

“We never seriously entertained any purchase offers,” she said.

Secam is also pleased that a locally based company ended up as its tenant.

“We would have been happy just with a solid tenant,” de Venoge said. “We are pleased that it is local.”

Thanks for reporting on this! I’ve been very curious about what was going to happen with the old Richbrau location.

I wouldn’t have guessed it was going to turn into an office space, but like Allison said, the size and layout would have made it very difficult to lease.

Congratulations to everyone involved!