A Virginia restaurateur behind a chain of burrito bars is launching a new concept in Shockoe Bottom.

Ron Morse, the man behind the Baja Bean Company, is opening a burger restaurant called Station 2 inside a newly restored, turn-of-the-century firehouse.

He plans to open the restaurant this spring at East Main and 21st streets.

“I’ve had this burger concept for a while and was looking at some smaller spaces and those fell through. Then we found this,” Morse said.

The firehouse is part of the apartment and retail development covering an entire block.

Shockoe Valley Heights, as it’s called, is a joint venture between Sensei Development and Monument Construction. 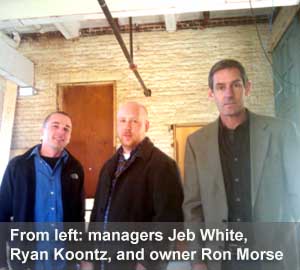 Morse opened the first Baja Bean in Williamsburg in 1989. He said he wanted to open another restaurant but felt that it was time for something different.

“To be in the Mexican segment now, there is just an overkill of places out there,” Morse said. Baja Bean has four locations: one in Richmond, one in Staunton and two in Charlottesville.

Ryan Koontz, a manager at the Richmond Baja Bean, spotted the new location and brought it to Morse.

“We’ve been looking at the spot since it was boarded up,” Koontz said.

Station 2 will have sit-down service, a full bar and an eclectic variety of burgers. Morse said he’ll have a basic burger and fries combo for less than $4, as well as more fancy burgers with Virginia-raised beef that will cost closer to $10.

Gourmet burgers are taking off as the latest food craze, with higher-end joints making headway across the country. Even in Richmond, Station 2 will have a bit of competition. Boom Boom Burgers is opening a few blocks away on Franklin Street and offering burgers made from locally sourced ingredients. (You can read about that restaurant in an RBS story here.)

Morse’s restaurant is still in the permitting phase, but developer Marc Galt of Sensei Development expects the project to be completed within three months.

Galt said the apartment building next to the firehouse is basically complete and is awaiting its certificate of occupancy from the city. Six of the 24 apartments are preleased, Galt said. Rents range from $1,050 to $1,500 a month.

“That shows that demand down here is still very strong,” Galt said.

The second floor of the firehouse also has three apartment units, two of which are leased.

Development of the two buildings cost a total of $4.1 million, including acquisition costs. The buildings are marketed together as Engine Company Lofts.

Last winter, Galt and his partners finished renovating a warehouse into what is now called Bobber Flats on the opposite corner of the block. That 41-unit apartment building is fully leased, Galt said.

The next phase of development for the block, called Old Stone Row, is a new 96-unit apartment building, which Galt said should be finished in July.

There’s a good math lesson for enterpreneurs in this article: REALITY CHECK #8: e-Math Can Lead to Knots in Your Stomach/Always Consider the Inverse of Your Assumptions. What is “e-Math” (thanks Michael Gerber for the idea)? E-math is how enterpreneurs decide to move forward with their next bright idea. It uses the “what-could-go-right” factor and allows them to feel good about following their guts. By definition e-Math relies on the numerator in the probablilities equation. So let’s play algebra with the business in this article. Entrepreneur A is moving forward at lightning speed on a start-up (new concept) restaurant; his… Read more »

Wow Linda! The reason why entrepreneurs like Ron are successful is taking calculated risks, not sitting around living in the world of what if. Welcome to the neighborhood Ron. We at Tiki Bobs wish you all the success in the world, and you can count on us to buy one of the first burgers.

As a resident of the River Lofts, you can count on me to buy one of the first burgers as well. Maybe you’d be interested in doing a cross-promotion with the management office?

Linda thank you for your half-baked consulting, are you honestly suggesting that the only regular customers he will have are the current tenants of the adjacent apartments? Additionally the article states that while gourmet burgers will be available they’re not his focus. This isn’t some sort of fly by night fusion cuisine, Americans have been eating burgers for 100 years. Haha, $1165 a month in revenues?!!?!?!?! He will probably pass that on his first Friday dinner rush. Ron already owns multiple other restaurants, I’m sure he has a pretty good idea of what it takes to be successful in the… Read more »

Was just standing in front of the firehouse telling our 12 guests how one of Richmond’s strengths is the way we adapt and reuse our cool, old buildings on Saturday during Real Richmond’s Shockoe Bottom/Church Hill food tour. Glad to know what the first floor will be. Best of luck!

Eric, you correctly picked up on the point that risks should be calculated. My approach is a little more detailed than the average bear.
It was noted that Ron has a successful track record and his seasoned gut is probably a good indicator of the right thing to do.

A lot of people who have lost their jobs are looking at starting a business as the best way out. My point is that there are challenges to every business plan and its better to go in with your eyes wide open.

Kevin, I did not suggest that his only regular tenants would be the resident, but specifically noted that other data was missing. it’s been my experience that many business owners have a hard time writing the financial forecast for their plan. This exercise shows where to get data that’s available and how to put it together. Of course he’s going to do that in a single meal. Business is both art and science. In my experience many business owners forget to do the math. My goal was to start a conversation around this issue and I appreciate your participation. Linda… Read more »

Maureen, I agree with you that we are very resourceful about reusing amazing old architecture. These buildings are art treasures.
Linda Heath