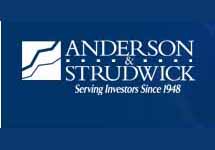 One of Richmond’s last remaining independent brokerage firms will be independent no more.

A letter of intent has been signed on the deal, and Sterne Agee said it expects the acquisition to close in the next 90 days. Financial terms were not disclosed.

“We’re very excited about opportunity to merge and to be involved with those guys,” said William Holbrook, the chief operating officer for Sterne Agee.

Anderson Strudwick Chairman Don Newlin referred all questions on the deal to CEO Damon Joyner, who did not return calls by press time.

Anderson Strudwick was founded in Richmond in 1948. In addition to its brokerage business, the firm has investment banking and asset management divisions, although the bulk of its revenue has historically come from the brokerage side.

The firm had been shopping itself around for several years and was almost sold — twice — to Wunderlich Securities.

Anderson Strudwick grew to have more than 20 offices across the country, although it has been downsizing in recent months. It closed two offices in July, and several of its longtime brokers left for other firms this year.

The company’s capital base had diminished over the past year or so, and several deals to bring in new capital never materialized, according to sources with knowledge of the company.

Sterne Agee also has the ability to clear its own trades, a service that will come in handy for Anderson Strudwick, which saw its ties to Pershing, one of the largest and most respected clearinghouses in the United States, severed this year.

This isn’t the first time a Sterne Agee/Anderson Strudwick deal has been on the table.

Earlier this year, an Anderson Strudwick board member approached Sterne Agee to consider a buyout, according to sources. But nothing came of those discussions until now.

Sterne Agee has been hungry for deals this year.

It acquired San Francisco based-Nollenberger Capital Partners in February. Then in March, it made a $203 million takeover offer for a firm in Dallas, according to news reports. That deal was ultimately rejected.

Todd Newton, who served as Anderson Strudwick’s CEO for about a year from 2009 to late 2010, said the deal will be a good one for his former employer.

“The finest compliment you can be paid as a business is when you build up a firm and it’s purchased by another firm,” said Newton, who now works as a consultant in Alabama.

“It will be a step in the right direction [for Anderson Strudwick] and a very positive environment for the brokers. Operationally, Sterne Agee is are a solid firm.”

It’s unclear whether Anderson Strudwick will keep its name.

Joyner, who became chief executive this year after Newton’s departure, will become a senior managing director at Sterne Agee.

The majority stake of Anderson Strudwick stock is controlled by board member Milton Turner, a wealthy Tennessee businessman. A message left for Turner also was not returned.