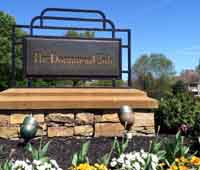 Just when it looked like a bankrupt local golf club and its members were about to settle their differences, 14 members went rogue.

About 450 members of the Dominion Club voted over the past few weeks in favor of a reorganization plan that would put the club on more stable financial footing and return at least a fraction of the millions they paid in initiation deposits.

But 14 contrarian member/creditors voted against the plan, throwing a major wrench in the process.

“Hopefully the club will be able to be saved, but 14 people may determine the future of the Dominion Club,” said Marshall “Nick” Nichols, a Dominion Club member and chairman of the club’s bankruptcy creditors committee.

A provision in the Chapter 11 reorganization plan allows the club’s owner, developer HHHunt, to back out of the plan if any of the creditors, most of whom are current or former members, voted against it.

Voting “no” allows members to retain their rights to file individual lawsuits against Hunt. Hunt had said that if there were any opt-outs they wouldn’t fund the plan.

So now the club and its owners will weigh their options: funding the plan even if there could be future lawsuits, trying to work something out with the 14 dissenters or putting the course in a Chapter 7 liquidation.

“These rogue creditors, for whatever reason, decided to retain their rights to future suits or claims against Hunt,” Nichols said. “For Hunt, that’s a problem.”

The Dominion Club filed for Chapter 11 bankruptcy in January after it said it could not pay $1.7 million in initiation deposit refunds that had come due to about 100 members at the end of 2010. Another $10 million in deposit refunds was due down the road.

The plan also called for the Hunt entities to support the club with a working capital loan over the next five years, to lower the monthly rent the club pays and to look to sell the club and distribute the proceeds to member/creditors within the next 12 years.

The 14 members might want the option to go after Hunt for the entire sum they are owed, rather than the fraction that was called for in the plan. Others might just be dissenting out of spite.

“There are people who had their own vendettas against Hunt,” Nichols said. “And it could be a detriment to the future of the club.”

A hearing to confirm the plan had been set for this week. That will likely be continued so Hunt can weigh its options in light of the 14 opt-outs.

“The ball is in Hunt’s court as to what they are going to do with these 14 creditors,” Nichols said.

Vernon Inge, a lawyer with LeClairRyan who has represented the club entity, would not comment.

Tyler Brown of Hunton Williams, who represents the creditors committee, referred all questions to Nichols.

Robbie Westermann, an attorney with Hirschler Fleischer who represents Hunt, did not comment by press time.

“Mismangement” is a shoddy defense to restructure a Chapter 11 when the developer profited substantially from the value the golf course contributed to the surrounding residential and eventually commercial development in this community. Further shame on HHH for not honoring their original commitment to it’s membership while garnering massive profits from this community as well as the many other developments in Richmond they have built. The money is there to do what’s right…it’s just artfully tucked away behind the mattress in the form of a trust….common business sense would indicate the reason for the ownership structure was to provide HHH… Read more »

Based on my knowledge of what has transpired and what Hunt has done to Memebers and the Club’s finances oveer the past 20 years ,Hunt’s financially draining of the Club’s funds is similar to ” fraud”. He has not withheld funds for the membership reimbursment in escrow as he should have nor has he held funds in reserve for Capital improvements.What he has done is taken every nickel he could and used it to his and his family’s benefit.No other Club or business is run properly in this manner.What he has done is dupped and bullied all of the members.… Read more »