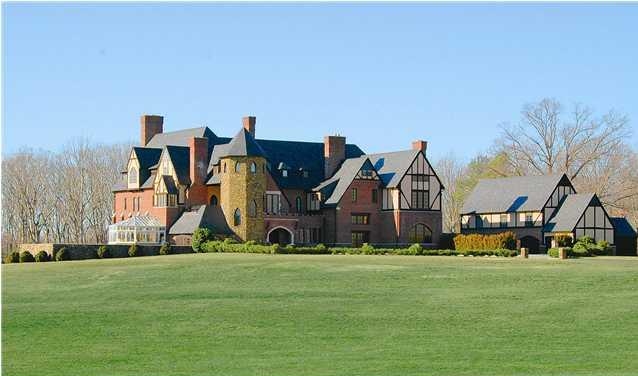 The asking price on the gargantuan home known around town as the “the castle in Goochland” has been cut almost in half.

The house, which sits at 1500 Manakin Rd., has 10 bedrooms, 25 bathrooms, 11 fireplaces, a 2,400-square-foot ballroom and a two-story library. If the prospect of keeping that many rooms tidy is what’s holding you back, fear not: The property’s staff are willing to continue working for a new owner, according to promotional materials.

Dennis A. Pryor and his wife, Cindy, had the property built on 55 acres in Goochland County near Kinloch Golf Club and Hermitage Country Club. Construction began in 1996 and took more than three years.

Pryor made his fortune in the medical management industry and commercial real estate.

The Pryors told Virginia Living Magazine last year that they were looking to downsize and planned to build a more modest 10,000-square-foot stone home.

Today Dover Hall is listed with Frank Hardy Realtors for $5.95 million, on par with the most current county assessment. Hardy said he was not authorized by his clients to comment on the listing.

The lavish property has been featured in numerous magazine stories that describe the home’s decor. 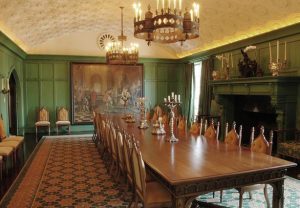 At its current price buyers can choose to buy the home with furnishings. As described in magazines, the castle’s interior includes a billiards room with cowhide wall coverings and about 30 mounted game trophies.

Both Pryors are graduates of the University of Richmond, and the home is said to be inspired by the UR architecture as well as the Biltmore estate, the former home of Cornelius Vanderbilt outside Asheville, N.C.

For more photos of Dover Hall, click here and here.

It would not work for my family would need more bathrooms ………seems like he really took shortcuts in deciding how many baths were needed !!!!!!!

I estimate between $30K to $40K a month for taxes, electricity, plumbing, insurance, staff salaries and maintenance. After all said and done, this could cost just under half a million dollars per year just to maintain. This house would be hard to give away for free. Like Green said, a B&B and/or a wedding venue. Unfortunately, you would have to have a lot of wedding parties and B&B guests to make a slight profit with the overhead cost. Goochland is gorgeous, no doubt, but this house is not on a lake, in the mountains, on a beach, or near a… Read more »

I think the carriage house is bigger than the home in which I grew up.

Michael Schwartz, as the writer of this piece, I wish you had done a little more homework. George Washinfton Vanderbilt built the home you reference. His father was dead. Cornelius never had anything to do with the Biltmore. Sorry you referenced something that was unnecessary to your article and so incorrect.

The house is on 55 acres. That’s not really an estate. Big house, not much land.

$5 million package deal will get it sold.

Frankly this house isn’t at all bad, despite its somewhat remote location. Most of the over-the-top ‘neo-mansions’ I’ve seen are embarrassingly kitschy but most of this one is executed in remarkably good taste. The Dining Room in particular is stunning. But 25 bathrooms? Wow…

Elle, your points were spot-on and amusing to boot!

Meanwhile, I tried to look up the architect but his only contact info is through Facebook. Never mind!