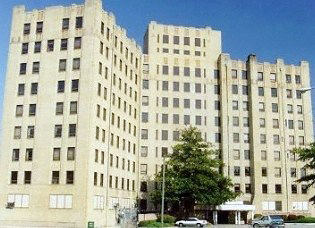 For the second time in two days, a Hampton Roads developer has been charged in a massive fraud involving historic tax credits and a failed Norfolk bank.

Eric Menden, a 53-year-old developer in downtown Norfolk, pleaded guilty Friday to a $41 million bank fraud and tax credit scheme that authorities say contributed to the failure of Bank of the Commonwealth.

Menden is the longtime business partner of George Hranowskyj, who was arrested and charged Thursday with a six-year historic tax credit fraud scheme valued at about $11 million.

Menden and Hranowskyj owned several of Norfolk’s marquee historic buildings, including the Wainwright building pictured above.

The U.S. Attorney’s office filed the charges in conjunction with the FBI, the IRS and the FDIC.

Menden pled guilty to conspiracy to commit wire fraud, making false statements and conspiracy to commit bank fraud. As part of his plea, he will testify against former accomplices. He faces a maximum penalty of five years in prison for each count. He’ll be sentenced July 23.

Hranowskyj has not entered a plea and remains in jail in Norfolk pending a bond hearing Tuesday.

The case against Menden is larger and more complex than the one against Hranowskyj.

Details released by the U.S. Attorney’s office today claim that Menden and his partner were in cahoots with unnamed “bank conspirators” to fund their historic renovation projects and to conceal the true levels of the Bank of the Commonwealth’s nonperforming assets.

“Mr. Menden used his relationship with bank insiders to use the bank as his own personal ATM,” said Neil MacBride, the U.S. Attorney for the Eastern District of Virginia, in a prepared statement.

“He raked in millions telling big fat lies to get loans, secure funding from investors, and defraud state and federal tax authorities. Over the last few years, many people in this country have begun to understandably question our financial institutions. Unfortunately, this case indicates that those concerns are sometimes well founded.”

Bank of the Commonwealth was seized and shuttered last fall by federal regulators after three years of massive losses on millions in soured loans.

At the time the bank failed on Sept. 23, 2011, Menden and his business partner owed the bank approximately $41 million.

Menden, according to the case, admitted that he and Hranowskyj “performed favors for insiders at the Bank of the Commonwealth in exchange for preferential lending treatment.”

The two also helped the bank cover its rising levels of bad loans by purchasing foreclosed property from the bank using money allegedly fronted by the bank.

Menden admitted that he and his partner inflated the costs of historic rehab projects in order to receive more cash from the bank from construction draws.

A bank conspirator approved the draws without inspection, the case against Menden alleges.

The Bank of the Commonwealth applied in 2008 for $28 million in funds from the Troubled Asset Relief Program.

The application was denied, and the bank was forced into a written agreement with regulators in 2010 because of its deteriorating condition. That agreement prevented the bank from loaning money to troubled borrowers, which included Menden and Hranowskyj.

However, the bank allegedly continued to sell or try to sell foreclosed property to Menden through a third-party borrower, according to the case.

Norfolk banker Ed Woodard was the longtime head of Bank of the Commonwealth until he quit in December.

Neither of the cases against Menden or Hranowskyj specifically names any Bank of the Commonwealth employees.

After its failure, the bank’s assets were sold to North Carolina-based Southern Bank.

Its a shame that these two developers, just weeks ago were pointed to as examples of the historic tax credit program ‘working as it was intended.’ Interesting are the “convictions” of those in charge of this program and whom they chose to “bestow” their virtue on. Now it appears that the convictions are going to be handed down to more then just the developers themselves…. Great reporting Biz Sense you are a light in this City and State.

Years ago, when I first got out of the Marines and entered the civilian sector, I moved to Norfolk and rented an apt in Gent. I dealt directly w/ Menden. I had a catering company at the time and actually did his NYE party. It was very shady. Then, the apt we rented totally fell apart and they wouldn’t fix anything. After speaking w/ other tenants, it was more of the same. One girl was doing dishes in her bathtub. They then raised the rent every six months and, well, you know how the story goes. They also screwed us… Read more »

Good lord. Does anyone really believe that the insiders and BoD knew nothing of this. What about money raised just a few years before. The FDIC and FBI should check that angle with who participated there and the net might get much bigger and fuller to recover losses. This was not just business cycle here, but reckless abandon fraud.