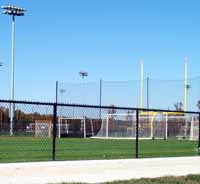 SportsQuest’s home turf might soon belong to someone else.

Shaw Industries Group, the company that manufactured and financed the artificial turf at SportsQuest, is pushing to foreclose on 120 acres at the troubled Chesterfield sports complex.

According to a legal notice posted Tuesday, Shaw has set an auction for the property for May 22 at the Chesterfield County courthouse.

The pending auction stems from debt SportsQuest took out to get the fields built and installed. It struck a deal with Shaw to finance at least part of the cost of the field and in return Shaw received a lien on the property.

At least some of that debt is held by the SportsQuest Foundation, the nonprofit piece of the four-year-old venture.

SportsQuest Foundation owed almost $11 million in loans, according to its most recent tax documents. The foundation paid $117,000 in interest to Shaw in 2010.

SportsQuest LLC, the for-profit entity that technically owns the land, was the guarantor on the loan.

The foundation had assets of $13.9 million, consisting of $6.3 million worth of land and $7.6 million presumably from the perceived value of the completed fields.

According to county records, the land is assessed at $7.14 million.

Dudley Duncan, who has been running SportsQuest on an interim basis since founder Steve Burton’s departure last month, declined to comment.

Two attorneys in Williamsburg, Susan Tarley and Philip Chapman, are acting as substitute trustees for the foreclosure process. Neither could be reached for comment by press time.

Despite its attempt to potentially reclaim SportsQuest’s collateral, Shaw is third in line in terms of lien priority on the property, according to the legal notice.

First in line is Chesterfield County, which secured first lien when it fronted SportsQuest $4.3 million to help pay for the construction of the fields.

Will Davis, director of Chesterfield’s Department of Economic Development, said the county still has use of the fields.

“As far as the county is concerned, we have not lost use of the fields and are not going to lose it,” Davis said. “We are waiting to see how this works out.”

Second to the county is Mark Sowers, a Chesterfield landowner who sold the property to SportsQuest in 2010. It’s unclear how much Sowers is owed.

Should Shaw end up controlling the land following the auction, it would likely either have to buy out the county and Sowers or strike some other type of deal to satisfy their claims.

The move also allows Shaw to protect its position in the line to make sure it doesn’t get pushed out by another party seeking foreclosure.

The pending auction also leaves up in the air the status of the many mechanics liens and unpaid debts that accumulated over the past two years.

SportsQuest owes more than $1 million in unpaid bills that are now being sought in the form of liens and lawsuits by contractors, vendors, and others that worked for SportsQuest over the past several years.

Bill Bayliss is simply the best!

Any bets on how long it will take SQ to file for bankruptcy?

Who really didn’t expect this outcome even 2 years ago. It seems we’re in the final chapters of this story before it probably becomes a county park. I don’t believe any private enterprise can be profitable with the fields as long as they don’t have leagues affiliated with them. Using them for 6 to 8 tournament weekends a year is profitable enough for anyone to take it over but the county.

This was destined to happen from the get-go. A terrible deal for the county from the start and I certainly hope all the contractors and mechanics that worked hard on that facility get compensated through this process. What a shame.